Our colleagues over at CAMERA have compiled a list of 13 suggested New Year’s resolutions for the media in 2013. 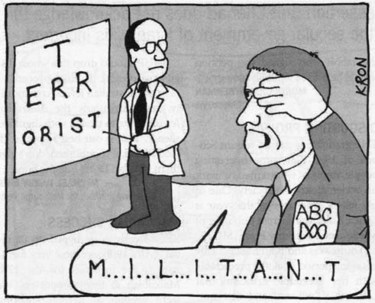 Perhaps most relevant for the BBC is number three on the list:

3. Call terrorists “terrorists,” not “militants”.
Terrorism, defined by the U.S. Law Code, Title 22, Chapter 38, Paragraph 2656 f(d) and used in the State Department’s annual reports to Congress is “… premeditated, politically motivated violence perpetrated against non-combatant targets by sub-national groups or clandestine agents….” The Department of Defense definition recognizes that terrorism is a crime: “The calculated use of unlawful violence or threat of unlawful violence to inculcate fear, intended to coerce or intimidate governments or societies in the pursuit of goals that are generally political, religious or ideological.” “Militant,” on the other hand, is undefined by American law and its consensus usage journalistically – militant unionist, militant environmentalist, militant vegetarian – is as an adjective. It suggests vehemence and persistence but not illegal violence. Farmers farm, lawyers practice law, and terrorists commit terrorism – they don’t advocate causes.

Read the rest here and tell us in the comments of any additional New Year’s resolutions you would like to suggest specifically for the BBC.

Like Loading...
Tags from the story
2013, BBC, Terrorism, Uncategorized
Written By
Hadar Sela
More from Hadar Sela
Throughout the month of October 2021, twenty-five written or filmed reports relating...
Read More