All four of the “Obstacles to Peace” articles were written by Martin Asser and are dated September 2nd 2010. However, they already existed prior to that date and were the subject of articles by CAMERA in mid-2007 – including the one on water.  Significantly, the BBC has not corrected the inaccuracies pointed out nearly six years ago and the article continues to mislead BBC audiences searching for information on the Middle East.

But this article is not only inaccurate. Like some of the BBC’s other coverage on the subject, it also advances a simplistic and specific political narrative on the subject of water in the Arab-Israeli conflict: a narrative used by political NGOs and by the Palestinian Authority itself to discredit Israel and employ water as a weapon against it.

Martin Asser’s article is both long and winding, jumping back and forth between claims connected to history and claims supposedly relating to the present day situation – or at least that of six years ago when the article was first written. Here, therefore, we will tackle those subjects in two parts, beginning with Asser’s historical claims.

Asser opens his article by stating:

“The Arab-Israeli dispute is a conflict about land – and maybe just as crucially the water which flows through that land.

The so-called Six-Day War in 1967 arguably had its origins in a water dispute – moves to divert the River Jordan, Israel’s main source of drinking water.

Years of skirmishes and sabre rattling culminated in all-out war, with Israel quadrupling the territory it controlled and gaining complete control of double the resources of fresh water.” 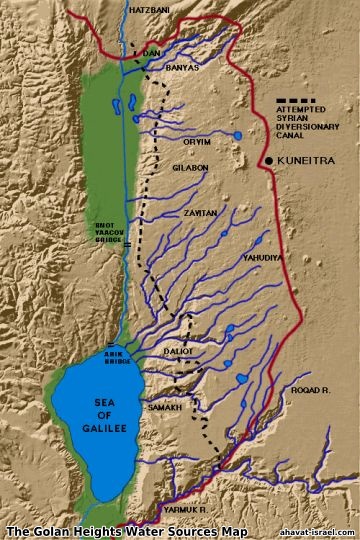 talking about is the Arab League plan to divert the headwaters of the Jordan River. In 1965 Syria began constructing a canal – with financing from Egypt and Saudi Arabia – which would divert the Banias tributary from the Jordan to the Yarmouk, thus preventing its waters from reaching the Sea of Galilee. Concurrently, Lebanon began diverting another tributary – the Hatzbani – into the Litani River. Had the plan materialized, it would have reduced Israel’s overall water supply by some 11% and increased the salinity of the Sea of Galilee by 60 ppm.

Whilst this issue undoubtedly contributed to tensions between Israel and its neighbours, it is notable that Asser skirts around the fact that the Six Day War was about much more than that – not least the massing of Egyptian troops in Sinai on May 15th and the ejection of the UN from that area, the closure of the Straits of Tiran on May 22nd and the threats issued by Arab leaders such as the then Syrian Defence Minister Hafez al Assad and Nasser, with the latter stating (inter alia) on May 27th “Our basic objective will be the destruction of Israel. The Arab people want to fight” and the former stating on May 20th:

“Our forces are now entirely ready not only to repulse the aggression, but to initiate the act of liberation itself, and to explode the Zionist presence in the Arab homeland. The Syrian army, with its finger on the trigger, is united….I, as a military man, believe that the time has come to enter into a battle of annihilation.”

Asser’s account, however, could well leave the reader with the impression that it was Israel which went into the war with the intention of conquering territory, rather than Egypt, Syria and Jordan, along with the Arab Expeditionary Force composed of soldiers from eight more countries, together with the PLO. That impression is not dispelled by his later caveat “Israel says the 1967 war was forced upon it by the imminent threat of hostile Arab countries and there was no intention to occupy more land or resources”.

Returning later on in the article to the subject of the Six Day War, Asser writes:

“But the war’s outcome left Israel occupying an area not far short of the territory claimed by the founders of the Zionist movement at the beginning of the 20th Century.

In 1919, the Zionist delegation at the Paris Peace Conference said the Golan Heights, Jordan valley, what is now the West Bank, as well as Lebanon’s river Litani were “essential for the necessary economic foundation of the country. Palestine must have… the control of its rivers and their headwaters”. “

Asser neglects to mention that the League of Nations originally included the Golan Heights, Judea and Samaria and the Gaza Strip within the area allocated to the establishment of the Jewish National Home. He also fails to mention that the British too were of the opinion that control of water sources was essential and hence the British High Commissioner Herbert Samuel demanded – and secured – full control of the Sea of Galilee and the Upper Jordan River under the terms of the 1923 Franco-British Boundary Agreement.

Later on in the article Asser makes the habitual BBC mistake of conflating armistice lines with borders when he states that:

“Any country needs water to survive and develop. In Israel’s history, it has needed water to make feasible the influx of huge numbers of Jewish immigrants.

Therefore, on the margins of one of the most arid environments on earth, the available water system had to support not just the indigenous population, mainly Palestinian peasant farmers, but also hundreds of thousands of immigrants.

In addition to their sheer numbers, citizens of the new state were intent on conducting water-intensive commercial agricultural such as growing bananas and citrus fruits.”

Asser’s message here is very clear: the water-guzzling foreign-born Israelis do not belong to the region, the “indigenous” (environmentally friendly and romantic into the bargain) “peasant farmers” do. This narrative ignores the fact that significant numbers of those “indigenous” Arabs had in fact immigrated to the region during the days of the British Mandate when, whilst Jewish immigration was under strict controls, Arab immigration was not, prompting the British Governor of Sinai at the time to remark that:

“This illegal [Arab] immigration was not only going on from the Sinai, but also from Transjordan and Syria, and it is very difficult to make a case out for the misery of the Arabs if at the same time their compatriots from adjoining states could not be kept from going in to share that misery.”

As for Asser’s implication that stubborn Jews were “intent” upon engaging in “water-intensive” agriculture, had he referred to the British-executed Survey of Palestine of 1945/6, he would know that in fact, less than three years before Israel came into being, citrus fruit production was divided equally between Arabs and Jews and that 60% of the banana groves were owned by Arabs.

Part two of this article will take a look at Martin Asser’s claims regarding the subject of water in the present day.

Like Loading...
Tags from the story
BBC, BBC News, BBC Online, Israel, Martin Asser, Obstacles to Peace, Uncategorized, Water
Written By
Hadar Sela
More from Hadar Sela
According to an article by Helen Lewis in the New Statesman, the Guardian’s...
Read More