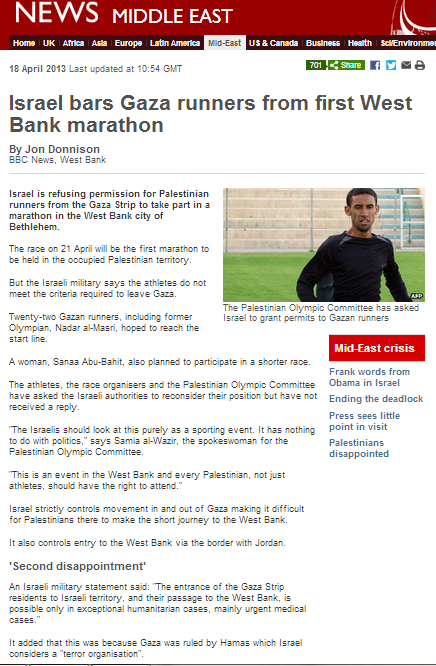 The report features an unchallenged quote from the Palestinian Olympic Committee spokeswoman.

“The athletes, the race organisers and the Palestinian Olympic Committee have asked the Israeli authorities to reconsider their position but have not received a reply.

“The Israelis should look at this purely as a sporting event. It has nothing to do with politics,” says Samia al-Wazir, the spokeswoman for the Palestinian Olympic Committee.

“This is an event in the West Bank and every Palestinian, not just athletes, should have the right to attend.” ” [emphasis added]

Donnison makes no attempt to verify the accuracy of the claim that the event (due to take place on April 21st) has “nothing to do with politics” for his readers. A quick perusal of the marathon’s website would have been enough to inform him of the fact that the reality is quite different. 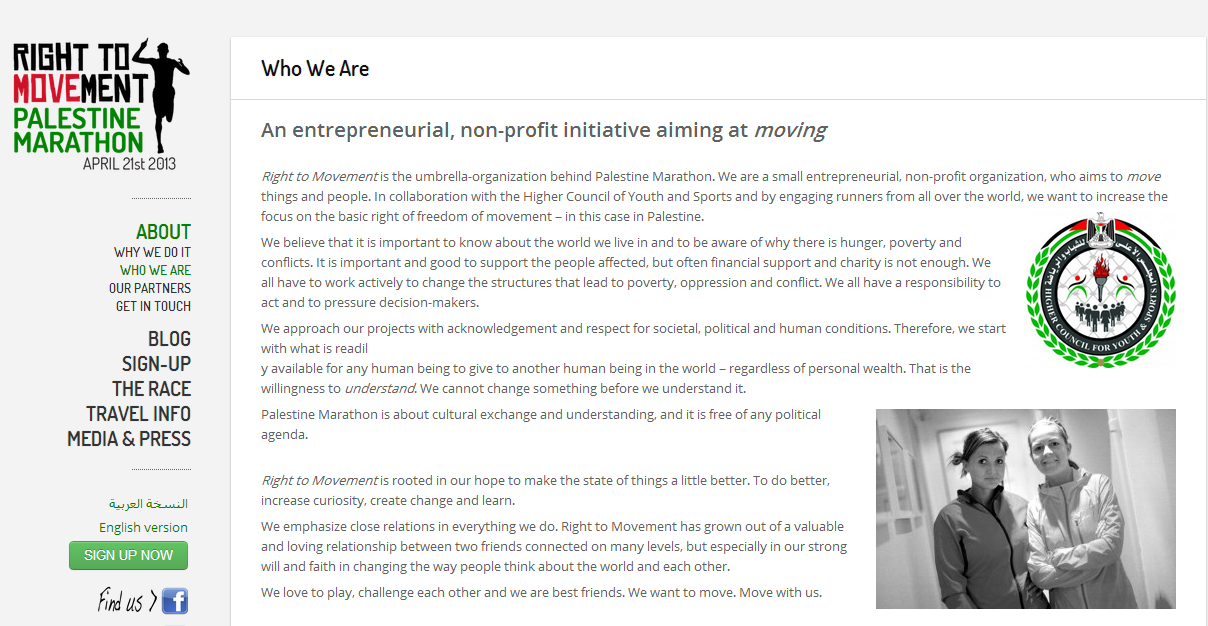 A look at the marathon’s official Facebook account – including, inter alia, the promotion of an article entitled “Running is a subversive act” which indicates some foreign runners’ links to the politically motivated NGO the Amos Trust – would also have relieved Donnison of any impression that the event is not political.

“And of course, in Palestine, where movement is so restricted, where people are separated from their family, land and friends by 8m high concrete barriers, where it’s not possible to travel 26.2 miles in a straight line without encountering road blocks, when people from Gaza are forbidden to enter the country, then running a marathon is a wonderfully subversive act.” 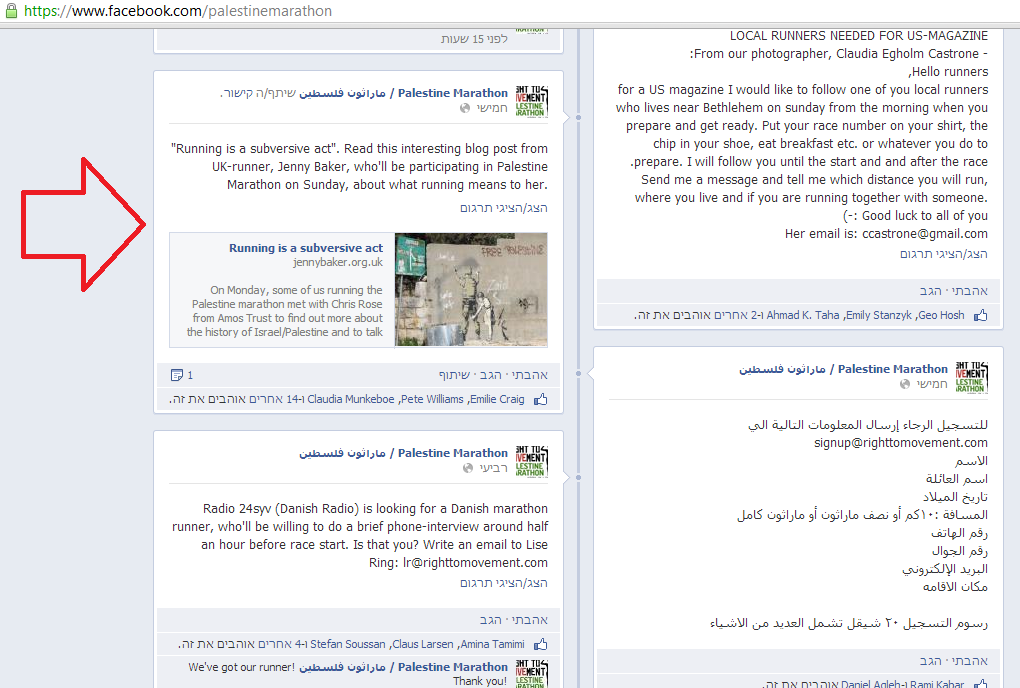 Among the co-organisers of the marathon, according to its own website, is the ‘Higher Council of Youth and Sports’ – a Palestinian Authority government body (also known as the ‘Supreme Council for Youth and Sports’) which is headed by Secretary General Jabril Rajoub – who also heads the Palestinian Football Association and the Palestinian Olympic Committee; from which Donnison conveniently got his quote.

Jibril Rajoub will of course be familiar to many readers, both for his own terrorist past and his use of his various sports-related positions in anti-Israel campaigns. Ironically – but not unrelated – two of the organisations headed by Rajoub, including the one now involved in the organisation of the Bethlehem Marathon, were party to a call to boycott the Jerusalem Marathon just a couple of months ago.

Donnison’s failure to fact check the claim that the marathon does not have political aims, as made in the quote he elected to include in his article, clearly renders the report inaccurate and partial. Donnison continues:

“Israel strictly controls movement in and out of Gaza making it difficult for Palestinians there to make the short journey to the West Bank.

It also controls entry to the West Bank via the border with Jordan.

An Israeli military statement said: “The entrance of the Gaza Strip residents to Israeli territory, and their passage to the West Bank, is possible only in exceptional humanitarian cases, mainly urgent medical cases.”

It added that this was because Gaza was ruled by Hamas which Israel considers a “terror organisation”. “

Donnison’s distortion of the reality behind the necessity for restriction of movement from a territory under the de facto control of a terrorist organization is as obtuse as his use of quotation marks around the phrase terror organization. As has been previously mentioned here on numerous occasions, Israel is far from the only country to categorise Hamas as such. Once again we see that the BBC’s effort to avoid making “value judgements” on the subject of terrorism constitutes a value judgement in itself – one which severely compromises BBC impartiality.

Donnison goes on to feature another quote in his report – this time from the political NGO ‘Gisha‘ which is regularly promoted by the BBC – as well as a link to the NGO’s press release on the subject. As previously noted here, it is not in the BBC’s remit to amplify the messages of  politically motivated NGOs and the fact that it does so without informing audiences of such organisations’ political stances severely compromises its own guidelines on impartiality.

Donnison ends his article with a snide swipe at the IDF Spokesman’s Unit:

“The Gazan runners’ inability to compete in the Bethlehem marathon is their second disappointment this month.

It takes a particularly perverse version of moral equivalence to be able to imply that the Hamas ban on women taking part in a sporting event in territory it controls is in any way comparable to a restriction on travel due to only too real security factors brought about by Hamas’ engagement in terrorism.