A few weeks ago the BBC covered the subject of the recent Middle East tour made by the new Archbishop of Canterbury on the UK page of the BBC News website.

An article dated June 21st 2013 included a side box of ‘analysis’ by John McManus which for some obscure reason went off on a tangent on the subject of the protests by ‘Women of the Wall’ – a subject hardly relevant to an article about the visit of the head of the Anglican Church. 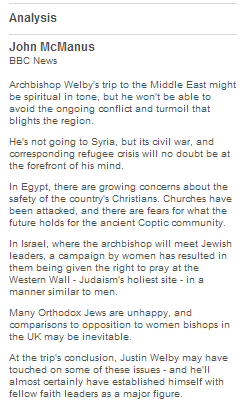 Archbishop Welby said he was “deeply concerned” about the “pressures on Christian communities” in the region. […]

Our correspondent said the political turmoil that has followed the national revolutions of the Arab Spring and the conflict in Syria has undermined Christian communities.

Christian minorities have suffered violent attacks and harassment in Iraq, Syria and Egypt, among other countries, and many Christians have fled the region, he added.”

Significantly, the article makes no mention of the persecution of Christians in the Gaza Strip and the Palestinian Authority controlled areas, despite the fact that – unlike Syria and Iraq – the latter actually was on the Archbishop’s itinerary.

A third article from June 28th has the BBC quoting one anti-Israel activist and linking to other sources quoting additional ones – with the Guardian link also including the usual distortions by Harriet Sherwood.

“But reports in the Times and the Guardian contained strong criticism from local Christians of the archbishop’s position that he had not had time to visit Bethlehem and Nazareth.

Nora Carmi, of the Kairos of Palestine Christian group, called for the Church of England to “call a spade a spade” over persecution of Christians.”

Notably, the BBC only seems to recognize the existence of one genre of Palestinian Christian – the type involved in anti-Israel campaigning. The others – the ones who are persecuted by their fellow Palestinians – cannot rely on the BBC to tell their stories or grant exposure to their point of view. And there are other Middle East Christians ignored by the BBC too.

In the only country in the Middle East in which the Christian population is growing and thriving, a months-long story of persecution has been completely overlooked. A Greek Orthodox priest from Yafia, near Nazareth, has been threatened by his own church and subjected to incitement by Arab members of the ‘Balad’ party for supporting service in the Israeli army by Christian Israelis.

“The persecution of Greek Orthodox priest Father Gabriel Nadaf has escalated to a new crescendo, as the Jerusalem Patriarchate threatens to sack the Nazareth-resident and deprive him of his livelihood.

Nadaf’s sin is his open activism on behalf of integration by Arab Christians – or Arab-speaking Christian Israelis, as Nadaf prefers to call himself and his followers – into Israel’s mainstream.

He openly and bravely supports, though does not necessarily encourage, the growing number of young Christians who are interested in enlistment in the IDF. He also supports those interested in performing national service in their own communities. This sufficed to put him on the hit list of radical Arab MKs – including the only Greek Orthodox Arab MK, Basel Ghattas (Balad) – and to create inordinate pressure on the Jerusalem Patriarchate to dissociate itself from Nadaf and to punish him. The Palestinian Authority is also reportedly leaning on the patriarchate.”

The tribulations of Father Nadaf and others were discussed in the Knesset earlier this month and Christian Israelis have begun speaking out. They have even formed a new political party which calls for the full integration of Christians into Israeli life.

Apparently though, none of that fits in with the BBC’s Middle East narrative and so BBC audiences remain unaware of such cases of harassment and persecution.