The BBC’s recent Arafat overdose – which began on November 6th when no fewer than six reports were placed on its website within hours – continued the next day with the appearance of additional items.

Also on November 7th, at the same URL as a previous item originally titled “Arafat widow’s ‘shock and anger'” (and hence replacing it), a filmed piece entitled “Widow: Yasser Arafat ‘had many enemies’” appeared.

Like most of the articles of the previous day, the written report amplifies evidence-free speculations of Israeli involvement in Arafat’s death.

“Many Palestinians have long believed that Israel poisoned Arafat. There have also been allegations that he had Aids or cancer. Israel has consistently denied any involvement.”

Once again too, the article downplays the scale of the role of Al Jazeera in the manufacturing of this story.

“France began a murder inquiry in August 2012 after the preliminary findings of polonium by the Lausanne scientists, who have been working with an al-Jazeera documentary crew.”

“Many Palestinians have long believed that Israel poisoned Arafat but Jerusalem has consistently denied any involvement.”

Knell provides a platform for the promotion of ‘man in the Ramallah street’ conspiracy theories regarding speculations of Israeli involvement and then embellishes them with her own narrative.

Simpson’s report presents an over-simplified view of the Swiss laboratory’s findings and also amplifies the Israel-related Palestinian conspiracy theories on the subject.

In Nick Childs’ report he erroneously describes Arafat as “a guerilla leader”. As we noted here a year ago when Jon Donnison also whitewashed Arafat’s terrorism by describing him as a “guerilla fighter”:

“A guerrilla fighter, by definition, “acts as a member of an irregular usually politically motivated armed force that combats stronger regular forces, such as the army or police”.

In other words, guerrilla fighters act against official security forces – not against civilians. […]

Yehuda Ohayon (aged 10), Yafa Batito (8), Mimon Biton (7), Haviva Biton (7), Chana Biton (8), Shimon Biton (9), Shulamit Biton (9) and Aliza Petretz (14) were not soldiers or policemen. They were pupils on their way to school on May 22nd 1970 when two bazooka shells were fired at their school bus by the PLO – under Yasser Arafat’s command.

Neither were the eleven Israeli athletes murdered by the PLO’s ‘Black September’ group at the Munich Olympic Games in 1972 a military target.

The 25 Israelis killed in the Ma’alot massacre – 22 of them children – in 1974 were not soldiers or policemen either. The 38 Israelis – including 13 children – murdered in the 1978 Coastal Road Massacre carried out by the PLO under Arafat were also not a military target.”

On November 8th the BBC News website added two more reports to its collection of Arafat-related items:  a written article titled “Palestinian officials: Israel only suspect in Arafat death” and a filmed report titled “Yasser Arafat forensic studies ‘will continue’“, both of which relate to the press conference given on that day by Tawfik Tirawi and amplify the PA’s unfounded accusations against Israel.

To sum up, in a period of less than 48 hours the BBC News website promoted thirteen different reports (shown below) on the subject of the publication of the Swiss findings and related subject matter, with nine of those items amplifying conspiracy theories concerning Israel’s involvement in Arafat’s death. None of the items attempted to propose any other explanation for the as yet unproven poisoning theory. 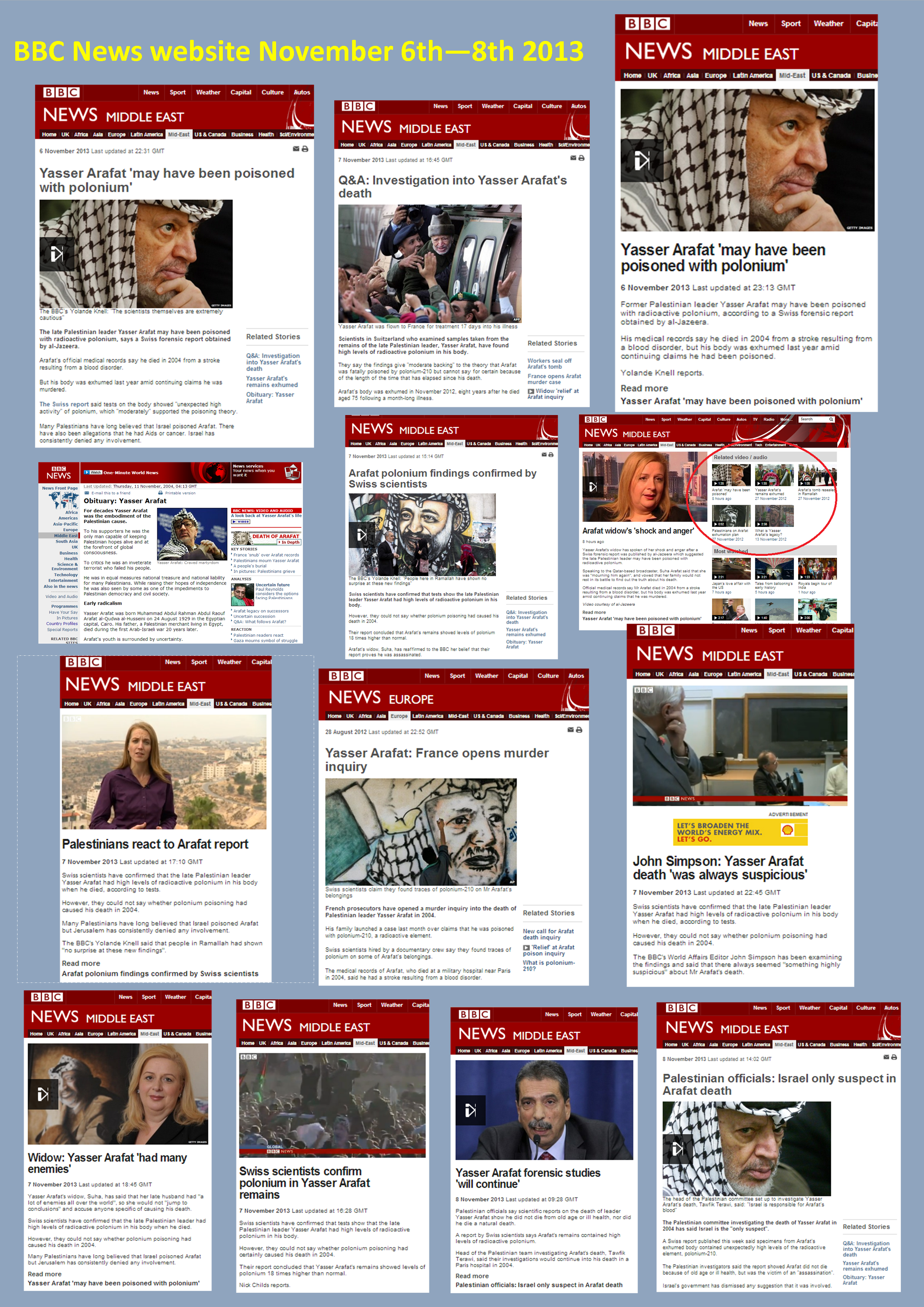