The BBC’s editorial guidelines on impartiality open with an explanation of the fact that those guidelines apply to all BBC content.

“Impartiality lies at the heart of public service and is the core of the BBC’s commitment to its audiences.  It applies to all our

output and services – television, radio, online, and in our international services and commercial magazines.  We must be inclusive, considering the broad perspective and ensuring the existence of a range of views is appropriately reflected.”

The guidelines go on to discuss the issue of “due weight”:

“Impartiality does not necessarily require the range of perspectives or opinions to be covered in equal proportions either across our output as a whole, or within a single programme, web page or item.  Instead, we should seek to achieve ‘due weight’.  For example, minority views should not necessarily be given equal weight to the prevailing consensus.

Nevertheless, the omission of an important perspective, in a particular context, may jeopardise perceptions of the BBC’s impartiality.  Decisions over whether to include or omit perspectives should be reasonable and carefully reached, with consistently applied editorial judgement across an appropriate range of output.”

Later, they move on to the issues of “controversial subjects” and “major matters”.

“When dealing with ‘controversial subjects’, we must ensure a wide range of significant views and perspectives are given due weight and prominence, particularly when the controversy is active.  Opinion should be clearly distinguished from fact.”

“In addition, we must take particular care and achieve due impartiality when a ‘controversial subject’ may be considered to be a major matter.  ‘Major matters’ are usually matters of public policy or political or industrial controversy that are of national or international importance, or of a similar significance within a smaller coverage area.  When dealing with ‘major matters’, or when the issues involved are highly controversial and/or a decisive moment in the controversy is expected, it will normally be necessary to ensure that an appropriately wide range of significant views are reflected in a clearly linked ‘series of programmes’, a single programme or sometimes even a single item.”

With regard to news, the guidelines state:

“News in whatever form must be treated with due impartiality, giving due weight to events, opinion and main strands of argument.  The approach and tone of news stories must always reflect our editorial values, including our commitment to impartiality.”

The guidelines also relate to the subject of “impartiality over time”.

“In achieving due impartiality, a ‘series of programmes’ may be considered as a whole.

The term ‘series of programmes’ applies to the following:

Content that deals with the same or related issues, within an appropriate period, and are clearly linked.

This may include a strand with a common title; different types of linked programmes (such as a drama with a following debate); a clearly identified season of programmes or items on the same or similar subjects; or a set of interlinked web pages.  Such programmes, items or web pages need to achieve due impartiality across the series, and online content should include links or signposts to the other online elements.”

“On long-running or continuous output (such as general daily magazine programmes, the News Channel, Online, etc.) due impartiality may be achieved over time by the consistent application of editorial judgement in relevant subject areas.”

The subject of Israel’s anti-terrorist fence is without doubt one that can be classed as controversial – as we know because the BBC has for over a decade been regularly informing audiences of its “controversial” status, for example here, here and here.  Audiences are therefore entitled to expect that the BBC would make a special effort to achieve “impartiality over time” and to afford “due weight” to differing views on the subject, so let’s take a look at whether it does present the issue with “due impartiality” or not.

The fact that the requirement for due impartiality relates to all BBC content prompts the expectation that visual representations of the fence will also accurately and impartially reflect reality.

Over 90% of the anti-terrorist fence is exactly that: wire fencing. Only a small proportion – 8% – is constructed from concrete. Accurate and impartial visual representation would therefore mean that over 90% of images used by the BBC to illustrate features or articles relating to the subject would show wire fencing.

One of the items promoted in the above mentioned search on the BBC News website is an “In Pictures” feature dating from April 2003 – whilst the second Intifada which brought about the fence’s construction was still ongoing. The feature includes no pictures of Israelis and no mention whatsoever of terrorism. The one photograph of the anti-terrorist fence itself is of a concrete-built section and the lack of impartiality displayed in the accompanying captions speaks for itself. 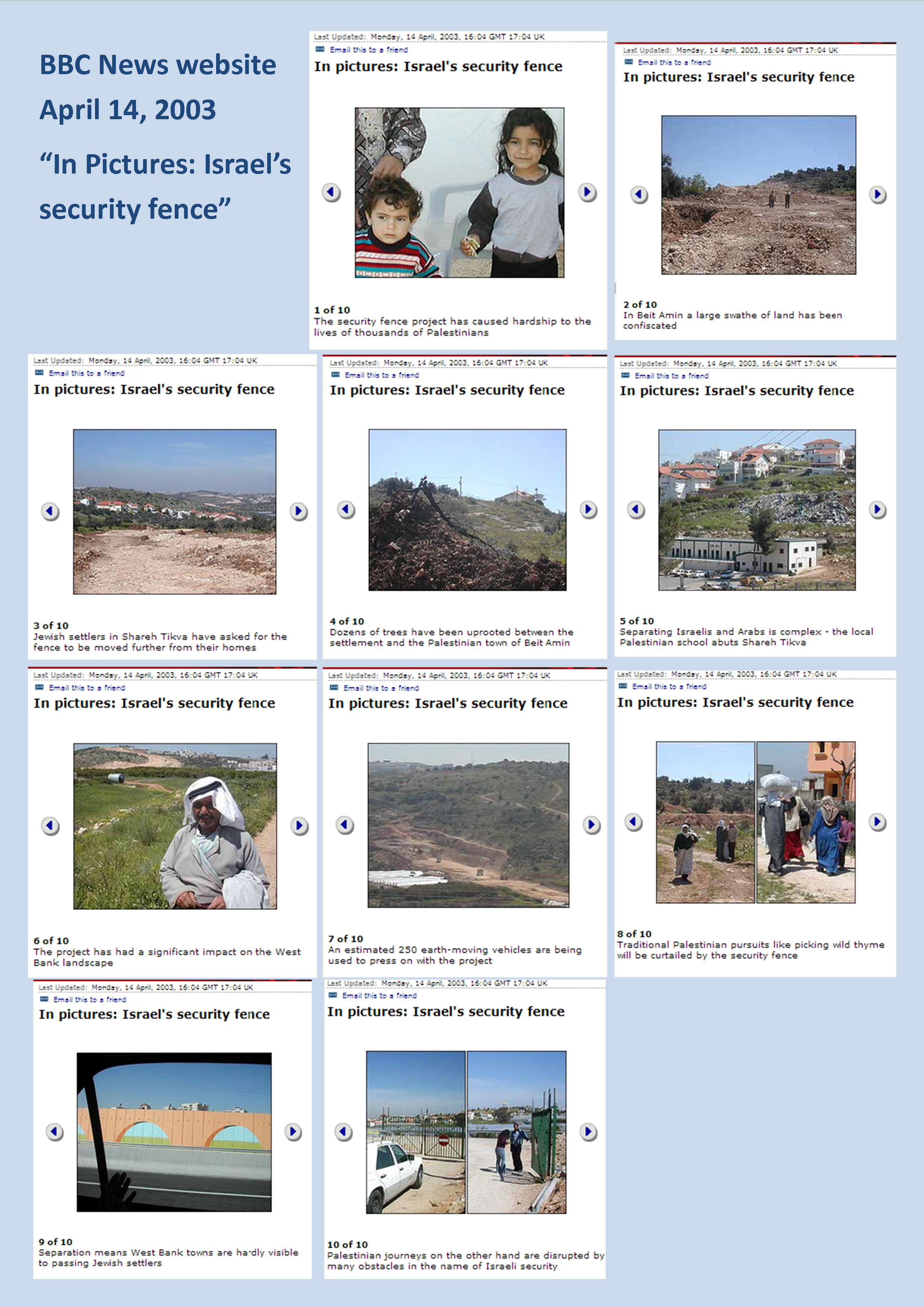 Later “In Pictures” depictions of the fence similarly focus exclusively on the small proportion of it which is built from concrete. 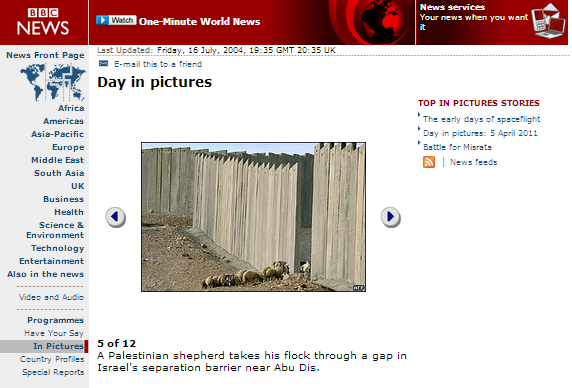 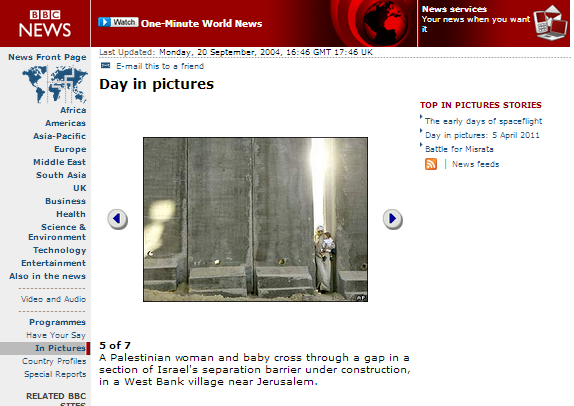 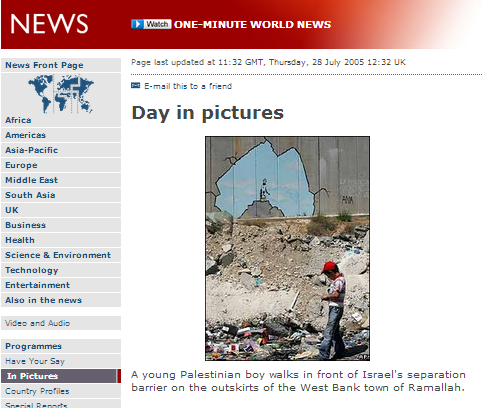 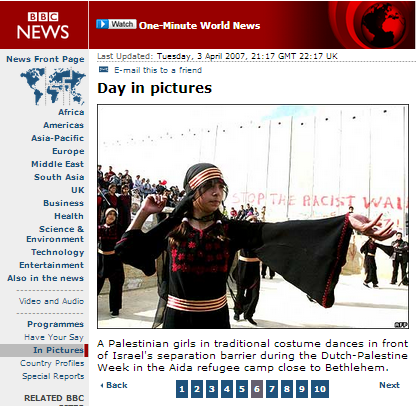 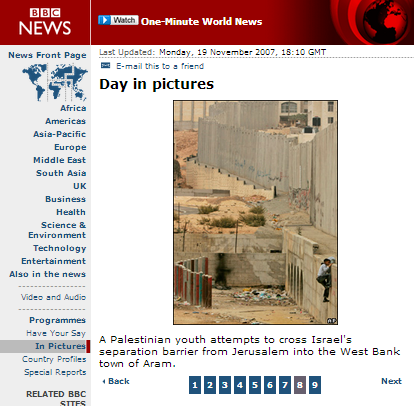 In the written reports appearing in the above search on the BBC News website which include illustrative photographs of the fence, the majority also depict it as a concrete structure. 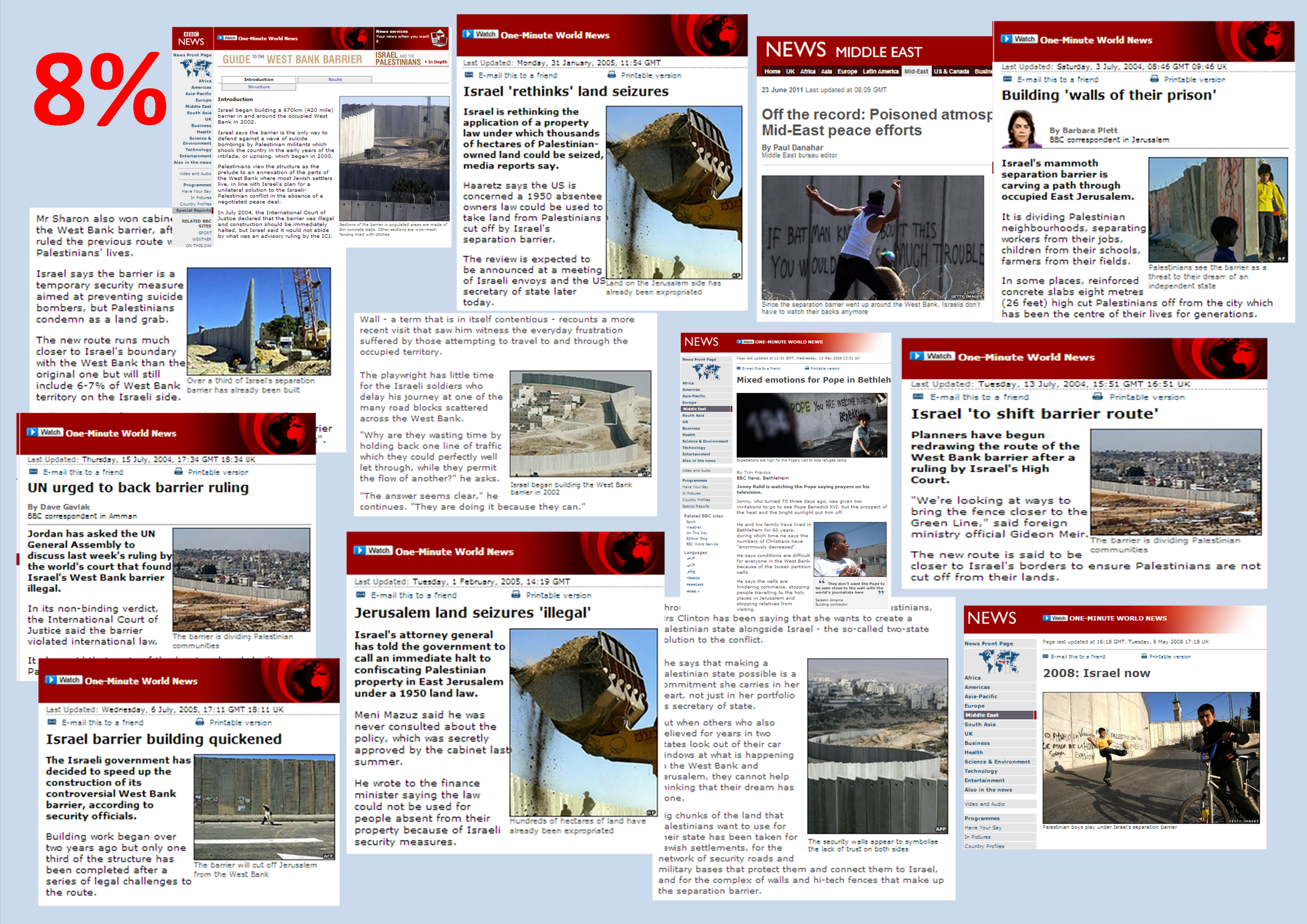 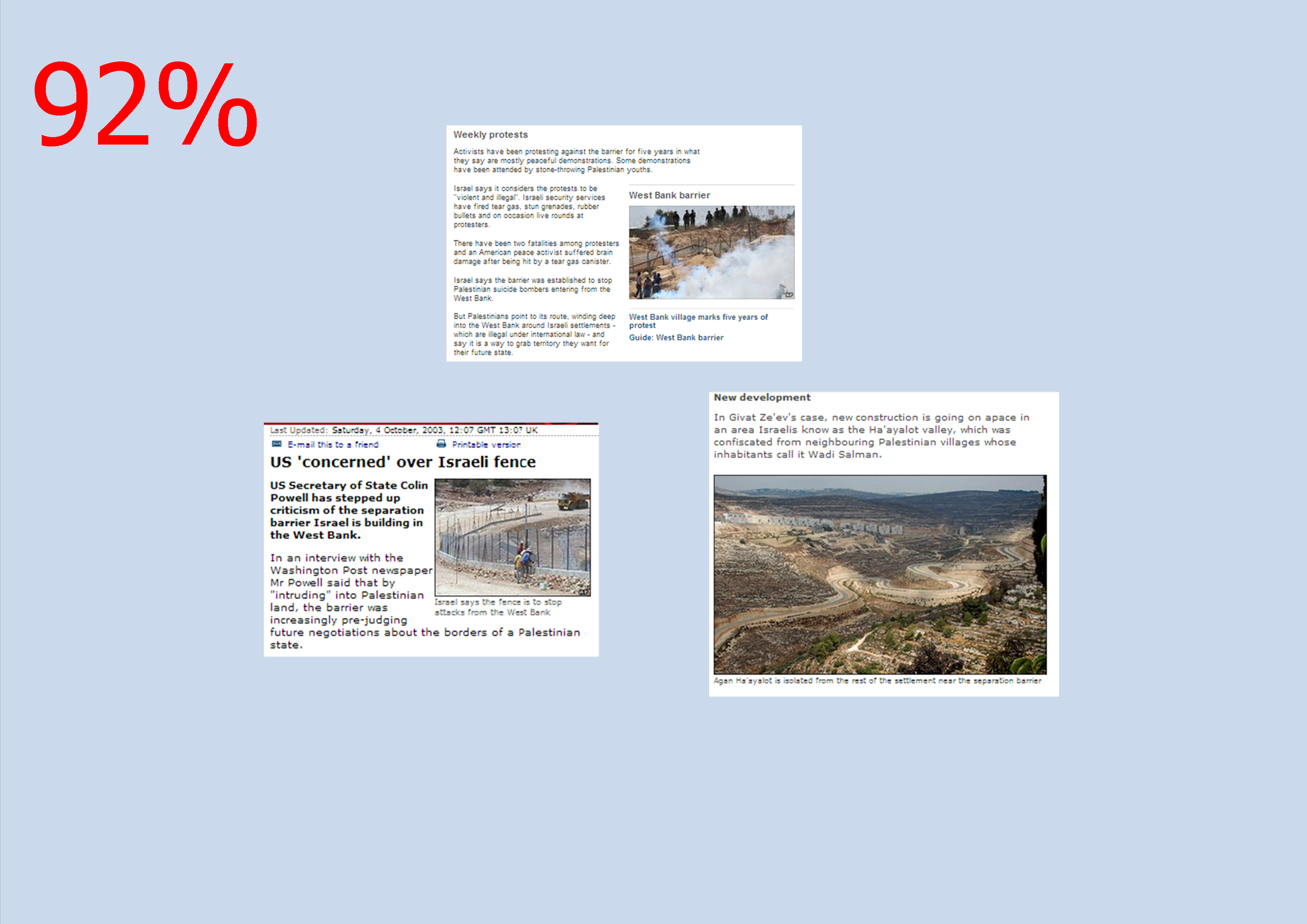 Clearly, in terms of visual representation, due impartiality is not achieved, with the 8% of the fence which is made of concrete featuring disproportionately in BBC reporting over a long period of time.

The second part of this article will examine the impartiality of the written aspects of BBC reporting on the anti-terrorist fence.

Like Loading...
Tags from the story
Anti-terrorist fence, BBC, BBC News, BBC Online, Impartiality, Israel, Terrorism
Written By
Hadar Sela
More from Hadar Sela
One can get a good glimpse of the kind of received ideas...
Read More

0 replies on “Does BBC reporting on Israel’s anti-terrorist fence meet standards of ‘due impartiality’?”