News of a serious deterioration in the health of former Israeli prime minister Ariel Sharon prompted the appearance of an article on the subject on the BBC News website’s Home, Middle East and Europe pages on January 1st.

Titled “Ariel Sharon’s health suffers ‘serious deterioration’“, the report offers a link to a profile of Ariel Sharon – updated on January 1st 2014 to replace an older version  – from which many of the biographical details in the report appear to have been taken. 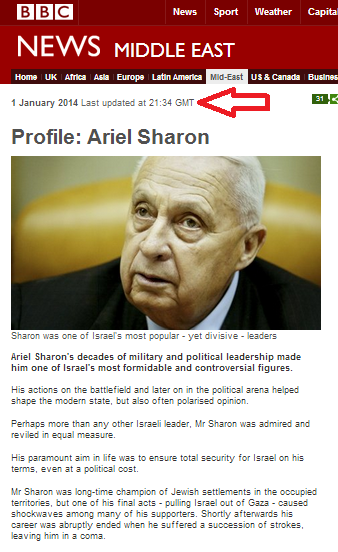 In the profile, some context is given regarding the background to the 1982 Lebanon war:

“In the wake of shelling of northern Israel by Yasser Arafat’s Palestine Liberation Organisation (PLO) in southern Lebanon, Mr Sharon masterminded Israel’s invasion of its northern neighbour in 1982.”

In the article, however, any such context is omitted:

“While serving as defence minister in 1982, he masterminded Israel’s invasion of Lebanon.”

The profile gives slightly better context to the building of the anti-terrorist fence which began in 2002 when Sharon was prime minister:

“Following a spate of suicide bombings and attacks by Palestinian militants in Israel in the 1990s and beyond, Mr Sharon sought to fortify the state by building the controversial West Bank barrier.”

The report lacks any such context and merely states:

In fact, the idea of an anti-terrorist fence was first proposed by Yitzhak Rabin a decade earlier and in 1995 Rabin appointed the Shahal Commission to study such a proposal. As Palestinian terrorism against Israeli civilians reached new heights in the second Intifada, a non-partisan grassroots group called ‘Fence for Life’ was formed which urged the Israeli government to construct a protective barrier. Eventually, overwhelming public opinion caused the Likud government headed by Sharon which had previously opposed any such move, to begin construction.

The BBC’s claim that Sharon “initiated” the construction of the anti-terrorist fence is hence at best a very partial and selective representation of the facts.

On January 2nd, that article was replaced by another at a different URL titled “Israel ex-PM Ariel Sharon ‘critically ill’“. In that report, which has undergone several changes since its initial publication, a better presentation of the context of the First Lebanon war and the reasons behind the construction of the anti-terrorist fence is provided.

“While serving as defence minister in 1982, he masterminded Israel’s invasion of Lebanon in the wake of shelling of Israel by the Palestine Liberation Organisation which was based there.”

As can be seen in the screenshot above, that article also links to the newly updated profile of Ariel Sharon which – despite its recent amendment – features repetition of the long-promoted BBC myth that the second Intifada began because of Sharon’s pre-coordinated thirty-four minute visit to Temple Mount in September 2000.

“In 2000 Mr Sharon paid a controversial visit to the holy compound in Jerusalem known as the Temple Mount to Jews and Haram al-Sharif to Muslims.

That BBC myth has been previously addressed on these pages and readily available statements by numerous Palestinian figures relating to the fact that the intifada was pre-planned have been presented.

Especially in light of the fact that it appears that this updated profile may sadly be put to considerable use in the near future, it should be immediately corrected.