Our colleague Gidon Shaviv over at Presspectiva has been investigating the claim made by several Western journalists recently that Ariel Sharon was nicknamed ‘Lion of God’. Among those who made that claim – in an article titled “Ariel Sharon’s mark on history” which appeared on the BBC News website’s Middle East page on January 11th – is the BBC Jerusalem Bureau’s Kevin Connolly.

“Such was his [Sharon’s] reputation as a military commander that some accounts of his army career say he was nicknamed the Lion of God after a particularly daring tactical parachute operation against Egypt in 1967 in the Sinai desert.” [emphasis added] 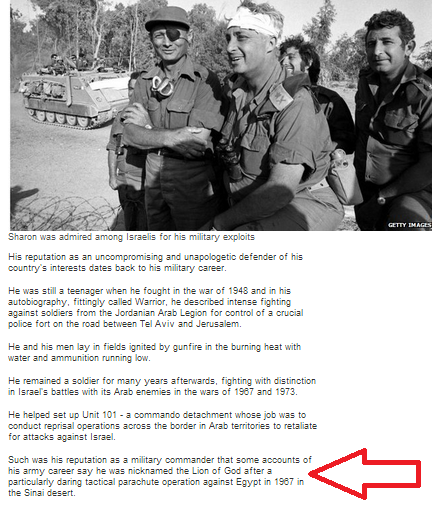 “Lion of God is an unlikely nickname for a man whose Hebrew first name is Ariel. The name Ariel could and has been interpreted as meaning lion of God, (Ari=Lion El=God) though it is more commonly associated with Jerusalem. In other words, in Hebrew, Sharon’s given name is indistinguishable from the supposed “Lion of God” nickname.

Moreover, comprehensive searches for historic references to Sharon as “Lion of God” did not turn up any results prior to 2012. Exhaustive online searches in Hebrew and English and in various biographies did not yield a single example of anyone ever having referred to him as the “Lion of God.” Likewise, the head of Israel’s state archives, a historian in his own right, had never heard of this moniker for Sharon.”

So where did that claim made by Connolly and others come from?

“The earliest known reference to “Lion of God” as a nickname for the late prime minister is Wikipedia’s entry for “Ariel Sharon“.”

Oops! And where did Wikipedia source that information? Read more on that in Gidon Shaviv’s post here.

“BBC News aspires to remain the standard-setter for international journalism“, its funding public is reassured by the BBC Trust. One of course rather doubts that those obliged to pay £145.50 a year to fund the BBC would expect the use of dubious, unverified information sourced from Wikipedia to be part of that “standard”.

0 replies on “Revealed: BBC’s Kevin Connolly knows how to use Wikipedia”