Has the Western media’s chosen focus and style of coverage of the hostilities in Israel and the Gaza Strip contributed to the spike in recent antisemitic incidents in Europe in general and the UK in particular? That question could probably keep several doctoral students busy for quite some time, along with the equally relevant question of whether or not events in the Middle East actually foster antisemitism or if in fact racist reactions to those events are really the product of pre-existing antisemitic attitudes.

Here is a report produced by Jenny Hill of BBC Breakfast News on August 7th – “Gaza conflict: UK police record rise in anti-Semitism” – which edges audiences towards the view that it is the events themselves which cause antisemitism. Hill opens:

“So many deaths. So much misery. A conflict whose consequences are felt worldwide.”

The item then cuts to an interview with the CST’s Mark Gardner, followed by other interviews with members of the Jewish community and then footage from a London demonstration with a speaker almost screaming:

“The death toll is increasing. It’s over sixteen hundred now. Most of them are young children.”

That latter claim is obviously not true but nevertheless, whoever edited this report elected to include it anyway and Hill follows that section of footage by saying:

“Of course there is tension.”

“For now, difficult questions: how to stop what’s been described as an endless cycle of suffering. How to calm the hatred it engenders.”

Remarkable too is the fact that the report includes an interview with Hugh Lanning of the Palestine Solidarity Campaign – one of the organisers of several demonstrations in the UK during the last few weeks. Lanning says:

“We’re very clear that…err… antisemitism or any form of racism isn’t tolerated on any of our protests and actually be a distraction from the main purpose. Our opposition is to what the Israeli government with the support of the US and the UK government is doing and that’s where we want the focus to be.”

Leaving aside the issue that the PSC’s logo itself eradicates the one and only Jewish state from the map, the fact that the BBC provides Lanning with an unchallenged platform from which to airbrush the antisemitism which has been seen (not for the first time by any stretch of the imagination) at three London demonstrations it helped organise which took place prior to this interview is obviously a problem.

The picture below was taken by Richard Millett at the July 11th demonstration organized, inter alia, by the PSC.

These photographs were taken at the demonstration organized by the PSC and others on July 19th in London by Michael Ezra – see more on his Twitter feed here. 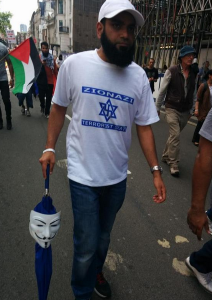 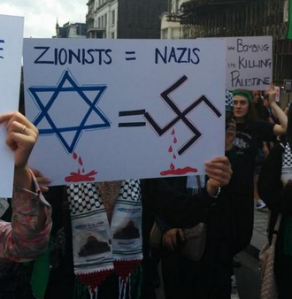 The PSC and fellow travellers also organized another demonstration in London on July 26th and these pictures were taken by Michael Ezra at that event. 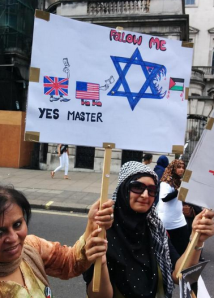 And yet, Jenny Hill – who of course works for an organization committed to editorial standards of accuracy – saw no reason to challenge the obvious falsehoods promoted by Lanning and even provided them with backwind and the BBC’s stamp of reliability.