The ‘England’ page of the BBC News website published a report titled “Anjem Choudary held in London terror raids” on September 25th  in which Choudary is described as a “radical Islamist preacher”. Given that most readers will naturally associate the use of the word ‘preacher’ with some sort of religious qualification, the accuracy of the BBC’s description is questionable – as Mehdi Hasan noted in 2010:

“Is Choudary an Islamic scholar whose views merit attention or consideration? No. Has he studied under leading Islamic scholars? Nope. Does he have any Islamic qualifications or credentials? None whatsoever.” 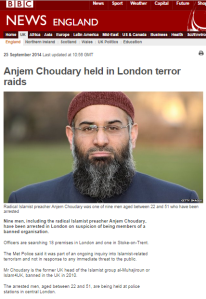 “Anjem Choudary is a deeply controversial Islamic figure, a man who many Muslims despise because they believe he causes enormous damage to their position in British society.

Alongside another now-banned cleric, he once spearheaded al-Muhajiroun, a group that argued that the West is fighting a war against Muslims and Islam.

When the government banned the group, some of its former members founded new organisations, including Islam4UK and Muslims Against Crusades – which were also later banned.

The latter group’s protests against British soldiers returning from Afghanistan, led to counter-protests and the subsequent formation of the English Defence League.

Mr Choudary has always denied allegations that he has either incited or glorified acts of terrorism.”

Despite his promotion of Choudary’s denials, Casciani made no attempt to provide readers with an in-depth view of the actual agenda of Choudary’s various groups or of the nature of his opinions – such as his recent statement of support for ISIS and the practice of crucifixion.

The following day – September 26th – the BBC News website produced an additional report titled “Radical preacher Anjem Choudary released from custody” which once again included multiple descriptions of Choudary as a “preacher” and context-free amplification of his outlandish claims.

“He described his arrest as “politically motivated”, in order to silence him on the eve of the Parliamentary vote on military intervention in Iraq.”

The various reincarnations of Choudary’s extremist group under assorted titles have of course been common knowledge for a long time. Neither his prominent position in groups serially banned by the British government, his promotion of bigoted views nor his connections to the export of European Jihadists to the Middle East has, however, presented a barrier to Choudary’s regular invitations to appear on various BBC programmes.

Curiously, that fact was not reflected in either of the BBC’s reports concerning Choudary’s recent arrest.

The BBC, ‘democratic principles’ and the Jihadist recruiter

Like Loading...
Tags from the story
Anjem Choudary, BBC, BBC News, BBC Online, Dominic Casciani, Omission, Terrorism
Written By
Hadar Sela
More from Hadar Sela
Not only is the BBC’s ‘rationale’ regarding Israel’s capital misguided, it is...
Read More