On October 30th the BBC News website’s Middle East page published a report relating to the attempted murder of Rabbi Yehuda Glick which had taken place in central Jerusalem some four hours previously. The article – originally titled “Jewish activist Yehuda Glick shot and hurt in Jerusalem” – has been amended numerous times since its initial publication but its first two versions included the following caption to its main photograph: 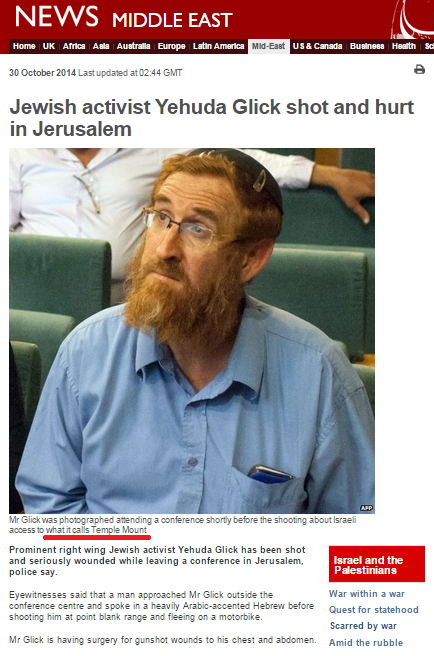 Later on in the report readers were told:

“He was active in a push by Jews to pray at a sensitive Jerusalem holy site.

Mr Glick had just attended a conference at the Menachem Begin Heritage Centre which had discussed Jewish claims to the Al-Aqsa Mosque compound which is venerated by Jews as the Temple Mount.”

“The Al-Aqsa compound is also revered by Muslims – it is widely seen as Islam’s third holiest site – and is one of the most contentious areas of the Arab-Israeli conflict.”

In other words, visitors to the BBC News website who read either of the first two versions of the article were not informed that Temple Mount (known as such not only by Israelis and long before the BBC’s obviously preferred title ‘Al-Aqsa compound’ came into existence) is the holiest site for Jews due to its being the location of the First and Second Temples. The failure to clarify that fact and the BBC’s use of the inaccurate phrase “Jewish claims to the Al-Aqsa Mosque compound” obviously misleads readers. Neither were audiences adequately informed why it is that non-Muslims (not just Jews) are currently not allowed to pray at the site or why, for example, a Christian wearing a crucifix would not be permitted to visit.

“The Jerusalem Islamic Waqf (endowments), a Jordanian-funded and administered Islamic trust and charitable organization, manages the site and generally restricts non-Muslims from entering the Dome of the Rock shrine and al-Aqsa Mosque, a practice it started in 2000. The Waqf does not allow non-Muslim religious symbols to be worn on the Temple Mount/Haram al-Sharif.”

In the third version of the report the following amendment was made:

“Yehuda Glick is a well-known campaigner for greater Jewish rights to pray at the site known to Jews as the Temple Mount, and to Muslims as Haram al-Sharif.

He had just attended a conference where delegates discussed Jewish claims to the compound, the holiest site in Judaism, which also contains the al-Aqsa Mosque – the third holiest site in Islam.”

All versions of the BBC report mislead readers by inaccurately stating:

“Israel argues that it tolerates free prayer to all at the site, but Palestinians claim it is unilaterally taking steps to allow larger numbers of Jewish worshippers.”

In the fourth version of the article was it clarified that:

“Jews are allowed on to the compound but are forbidden from praying or performing religious rites there.”

“The site is administered by an Islamic body called the Waqf, while Israeli police are in charge of security.

Jews are allowed on to the compound but are forbidden from praying or performing religious rites there under Israeli law.”

One might have thought that all BBC staff would be capable of writing about such a prominent issue accurately, thus avoiding the omission of such a crucial part of the story as the significance of Temple Mount in the Jewish religion and hence avoiding the situation whereby the accuracy of information received by a reader depends upon the time at which he or she accessed a BBC report. Obviously – as we have seen before – that is not the case.

Some four hours after the article’s original publication it was updated (with advertisement on Twitter) to include the following statement: 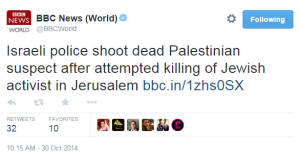 “Israeli police have since told the BBC that a suspect was located at a house in Jerusalem, and shot dead after an exchange of fire.”

In the report’s fourth version readers were finally informed that Mua’taz Hijazi from Abu Tor was a member of the Palestinian Islamic Jihad, who had previously spent 11 years in prison, but not that the PIJ subsequently issued a statement reading:

“The released prisoner Muataz Hijazi who was killed in an exchange of fire in Silwan is our activist. The attempted assassination of Glick is translation into deeds of the Palestinian feeling of vengeance in reaction to what is happening in Jerusalem.”

The appearance of several ‘martyrdom posters’ with the Fatah logo (Mahmoud Abbas’ party, of course) was likewise ignored, along with the Fatah statement “[w]e proudly mourn hero martyr. Shahid in Jerusalem son of Palestine. And the son of Fatah Moataz Ibrahim Hijazi”. 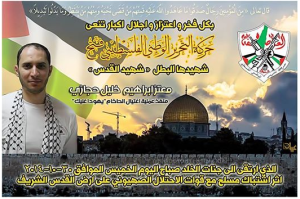 BBC audiences were also not informed in any of the versions of the report that Yehuda Glick had received numerous threats in the past.

The headline of the seventh version of this BBC report was changed to “Jerusalem holy site closure ‘declaration of war’ – Abbas“, meaning that within less than half a day, the article’s focus had shifted from the attempted murder of Yehuda Glick, through the shooting of his would-be assassin, to unqualified amplification of the ridiculous – yet dangerous – notion that the temporary closure of Temple Mount in order to reduce tension and the likelihood of violence is an intentional “attack” on the entire Muslim world. With no effort made to clarify to readers why the complex had been closed, that version of the report informed them that:

“A spokesman for Palestinian leader Mahmoud Abbas has described the closure of a disputed Jerusalem holy site as a “declaration of war”.

Nabil Abu Rudeina said the Palestinian Authority would take legal action over the move, which came amid tension over the shooting of a Jewish activist. […]

Palestinians hold the Israeli government responsible for a “dangerous act”, Mr Abbas was quoted as saying by Mr Rudeina, in remarks carried by AFP news agency.

“This dangerous Israeli escalation is a declaration of war on the Palestinian people and its sacred places and on the Arab and Islamic nation,” Mr Rudeina added.”

However, no attempt was made in either this version or any other of the report’s various incarnations to place its subject matter – and the PA president’s latest propaganda – in the context of recent incitement from the highest levels of the Palestinian Authority. As PMW has reported, a video of part of a speech made by Abbas on October 17th was broadcast nineteen times in three days by official PA television.

The day after that speech Abbas made another to the Fatah Revolutionary Council in which he dehumanized Jews visiting Temple Mount by referring to them as a “herd of cattle” and accusing them of “desecrating our holy sites”.  On October 27th the prime minister of the Palestinian Unity Government Rami Hamdallah visited Temple Mount, using the opportunity to accuse Jews of “Judaizing” Jerusalem.

““Jerusalem is a redline, and so is the Aksa Mosque,” Hamdallah told reporters. “We will go to all international institutions and Islamic and Arab countries to request that they stand against Israeli violations in Jerusalem.”

Hamdallah accused Israel of working toward Judaizing Jerusalem and the Aksa Mosque.

“We came here to say that Jerusalem is the capital of the Palestinian state and an important part of the national program,” he said.”

With the PA’s employment of the issue of Temple Mount being used to escalate its incitement to new heights, it is obviously essential that BBC audiences be made aware of the highly significant contribution of that factor to the current violence if they are to fully comprehend current and future events. This article, however, makes no attempt to meet the BBC’s obligation to build “understanding” of the issue.