December 17th saw the appearance of a report on the BBC News website’s Middle East page under the title “EU court takes Hamas off terrorist organisations list“. Readers who proceeded past that somewhat misleading headline discovered only in later versions of the report, however, that in fact the story is not quite so straightforward. 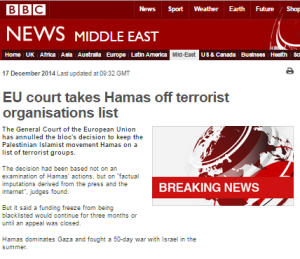 “In December 2001, the Council of the European Union – representing the governments of member states – adopted a “common position” and a regulation to combat terrorism.

It established a list of designated entities and people whose funds would be frozen. Hamas’ military wing, the Izz al-Din Qassam Brigades, was named on the initial list, and its political wing was added two years later.

Hamas contested the decision and on Wednesday the EU’s General Court found it had been “based not on acts examined and confirmed in decisions of competent authorities but on factual imputations derived from the press and the internet”.

The court said it was therefore annulling Hamas’ designation but would temporarily keep existing measures against the group “in order to ensure the effectiveness of any possible future freezing of funds”.

This would be maintained for three months, or, if an appeal is brought before the European Court of Justice, until it was closed, it added.

“The court stresses that those annulments, on fundamental procedural grounds, do not imply any substantive assessment of the question of the classification of Hamas as a terrorist group within the meaning of the common position.”

[…] European Commission spokeswoman Maja Kocijancic said the EU continued to “consider Hamas a terrorist organisation” and would consider its response to the ruling.” [emphasis added]

Remarkably, the BBC report does not relate to the key question of why the EU has not come up with its own independent evidence regarding Hamas’ terror activities either in the eleven years since the designation was first brought into effect or in the four years since Hamas’ lawyers first launched the appeal against its designation.

Notably too, the article presents a partial picture of the obviously relevant issue of Hamas’ terror designation worldwide.

“Israel, the United States and several other nations have designated Hamas a terrorist organisation due to its long record of attacks and its refusal to renounce violence.”

What the BBC’s article does do, however, is amplify Hamas’ subsequent spin of the ECJ decision.

“Hamas is a resistance movement and it has a natural right according to all international laws and standards to resist the occupation,” he told the Reuters news agency.”

Moreover, despite informing readers that “[u]nder its charter, the movement is committed to Israel’s destruction”, the BBC article additionally promotes the inaccurate and misleading notion of Hamas as a “resistance movement” in both its text and photo caption, whilst concurrently whitewashing its violent 2007 coup in the Gaza Strip.

“Hamas, which was founded in 1987, won Palestinian parliamentary elections in 2006 and reinforced its power in Gaza the following year after ousting its Fatah rivals.

Its supporters see it as a legitimate resistance movement against Israel, with whom it has fought for years.”

Photo caption: “Hamas is designated a terrorist group by many nations, but to its supporters it is a resistance movement”.

No effort is made to adequately clarify to BBC audiences that, as far as Hamas and its supporters are concerned, its efforts to destroy a UN member state count as “legitimate resistance” or that Hamas’ definition of “the occupation” includes the whole of Israel – as expressed just days ago by Mahmoud al Zahar at one of several recent rallies celebrating the 27th anniversary of Hamas’ founding.

“Anyone who thinks that we will recognize the existence of the [Zionist] entity or the 1967 borders is deluded… Palestine stretches from the Egyptian border in the south to Lebanon in the north, and from Jordan in the east to the Mediterranean sea in the west, and we will never recognize anything less than this.” He added: “If part of our land is liberated, we will establish our state in that part without relinquishing even an inch of the rest. Just as we liberated Gaza and established a genuine administration in it, [with] an army and security apparatuses that defend us, rather than the Israeli enemy [unlike those of the PA], we will do the same in the West Bank, as a prelude to attaining all of Palestine.”

Significantly, there was no BBC coverage of those rallies whatsoever.