More than an entire month has gone by since BBC audiences got their last ‘reporter in the Gaza rubble’ fix from Lyse Doucet and so it came as little surprise to see the baton handed to Yolande Knell on April 1st.

Knell’s written and filmed versions of the same story – “Gaza family ‘tricked’ into selling Banksy painting for $175” and “Palestinian ‘tricked’ over Banksy art” – both appeared on the BBC News website’s Middle East page.

In the written report readers learned that:

“A Palestinian man says he was tricked into selling a mural by the artist Banksy that is estimated to be worth hundreds of thousands of dollars.

Rabie Darduna told the BBC he was given less than $175 (£118) for the image drawn on the only remaining door of his house in Gaza.

It was one of thousands of homes destroyed during last year’s war.

Banksy visited Gaza in February and used the rubble as a canvas for his politicised graffiti.”

That story was also covered at the time by the BBC’s Gaza correspondent Rushdi Abualouf.

“Their lives in ruins: thousands of families in Gaza lost their homes in last year’s brutal war with Israel.”

Throughout the report Knell continues to use the story of a man who now regrets selling something he got for free after he discovered its proper value as a hook upon which to hang her real message.

“And when the British artist Banksy made a surprise visit here a month ago, this rubble inspired his politicized art.”

“Back in Gaza the Darduna family can’t get over this cruel twist of fate. Banksy painted on their destroyed house to show he cares about Palestinians’ plight but now they’ve lost his unexpected gift they feel their suffering even more acutely.” [emphasis added]

At the bottom of the filmed report’s synopsis, audiences are invited to click on a link titled “Writing on the Wall” which leads them to the BBC’s ‘iWonder’ website. That site is billed as a project intended to “educate and inform” and “a ‘one-stop-shop’ for factual and educational content” and so – as we have noted here before – one might expect it to stick to accurate and impartial facts. 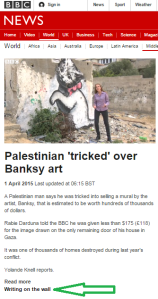 The page to which that promoted links leads includes, however, the following context-free politicized slogans: [all emphasis added]

“Banksy is the most well known graffiti artist in the world, even though he has never revealed his true identity. Quirky and political, his work has satirised oppression in Palestine, hypocrisy in politics and capitalist greed in London.”

Continuing his use of public spaces to display his work, he choose one of the most controversial walls in the world.

In 2005, to comment on Israeli involvement in Palestine, Banksy travelled to the Middle East and targeted the West Bank wall. His satirical stencils criticised Israeli militarism and oppression. The works provoked fierce debate in the media over whether a wall judged to be “illegal” by the International Court of Justice could in fact be vandalised. Banksy described the wall as “the ultimate activity holiday destination for graffiti writers”.

Yes – that is what the BBC apparently defines as “educational content”.