On March 27th the BBC News website informed its readers that Israel’s withholding of Palestinian Authority tax revenues had “crippled the Palestinian economy” and was responsible for “fuelling violence” in PA controlled areas.

“The decision to freeze the tax transfers to the PA, which provide two-thirds of its income, forced it to cut by 40% the salaries of thousands of government employees and announce an emergency budget.

On Wednesday, the governor of the Palestinian central bank said the tax transfer freeze was leading to a rapid economic deterioration and leaving the banking system dangerously exposed.”

By April 6th the PA’s financial situation had apparently become miraculously less precarious because the Palestinian president was able to refuse the sum of $400 million transferred by Israel. 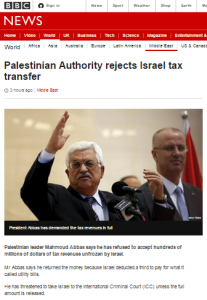 “Palestinian leader Mahmoud Abbas says he has refused to accept hundreds of millions of dollars of tax revenues unfrozen by Israel.

Mr Abbas says he returned the money because Israel deducted a third to pay for what it called utility bills.

He has threatened to take Israel to the International Criminal Court (ICC) unless the full amount is released. […]

Speaking at a rally in Ramallah, President Abbas demanded the tax revenues in full.

“We are returning the money. Either they give it to us in full or we go to arbitration or to the ICC. We will not accept anything else.””

The BBC’s report does not make any attempt to inform audiences on the debatable issue of whether or not such a topic even falls under the ICC’s jurisdiction. Later on readers are told that:

“Israel says it has deducted the cost of services provided to the Palestinian population, including electricity, water and hospital bills.

The government made the decision to restart payments two weeks ago but warned at the time that it would make deductions from the transfer.”

In line with previous reports on the same subject, the BBC fails to inform its audiences of the scale of the Palestinian Authority’s debt to Israeli bodies. As Reuters noted in its report on the same story, in February 2015 the combined debts of the Palestinian Authority and the Jerusalem District Electric Company (JDECO) to the Israel Electric Corporation (IEC) stood at around $492 million. The Jerusalem Post has further details:

Of the NIS 1.9b. owed to the IEC, about NIS 1.2b. comes from areas serviced by JDECO, while the remaining NIS 700 million is owed directly by the PA, covering areas in the Gaza Strip and the northern and southern West Bank, the IEC spokeswoman said.

The NIS 1.2b. debt comes only from areas within the PA and not from east Jerusalem, JDECO’s CEO, Hisham Omari, said. […]

With the bulk of the Palestinian debt hailing from JDECO regions, however, Omari attributed the ongoing financial crisis to three main problems.

The first, he said, is the failure of the PA to take enforcement measures against those who steal electricity from the JDECO grid.

“Up until this moment, we have not seen any progress from the PA to punish people who are stealing electricity, even though they [passed] a law,” Omari told The Jerusalem Post.

“Till this moment, there wasn’t any implementation.”

The second problem, according to Omari, is the fact that many Palestinian government offices do not properly pay their JDECO electricity bills.

The third problem he identified is the grave situation impacting the 12 refugee camps within his jurisdiction, in which residents fail to pay for their electricity at all.”

The BBC’s failure to report on that last topic has been noted here previously.

So, whilst the BBC devotes an entire article to the amplification of Mahmoud Abbas’ amateur dramatics, it once again refrains from making any effort to inform its audiences of the background to the latest installment of this long-running story.