As readers already know, during their coverage of the recent election in Israel, BBC journalists devoted significant energies to persuading audiences that its result signified the demise of negotiations between Israel and the Palestinians. Concurrently, audiences were repeatedly herded towards the belief that if the electorate had made different choices, the possibility of resuscitating the ‘peace process’ would have been significantly better – inter alia by means of this statement which was inserted into no small number of BBC reports:

“The centre-left Zionist Union promises to repair relations with Palestinians and the international community.”

So what would BBC coverage have looked like if the Zionist Union had won the election? A clue to that might be found by looking at the corporation’s coverage of Israeli elections over the past 23 years, beginning with the video below showing an edition of ‘Newsnight’ from June 23rd 1992 when the Labour party, headed by Yizhak Rabin, won the election.

Fifteen months later, Israel and the PLO signed the Oslo Accords but the years following that event were blighted by dozens of terror attacks on Israeli citizens. In May 1996 elections were held again, with the Likud gaining a narrow win. Three years after that, in May 1999, early elections were won by the Labour party headed by Ehud Barak and BBC audiences were told that: 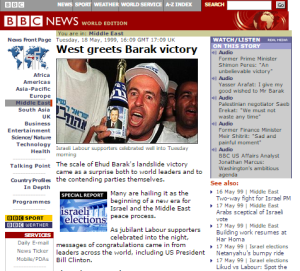 “The scale of Ehud Barak’s landslide victory came as a surprise both to world leaders and to the contending parties themselves.

Many are hailing it as the beginning of a new era for Israel and the Middle East peace process. […]

The BBC’s US Affairs Analyst, Jonathan Marcus, says the White House has an ambitious agenda for its future relations with Israel.

Top priority is the full implementation of the Wye Agreement, resulting from last October’s tortuous negotiations headed by Mr Clinton, that is supposed to extend Palestinian self-rule in the Occupied Territories.”

The Wye River Memorandum had of course been negotiated during the term of the 1996/99 Likud government. It includes the following:

The Palestinian side will make known its policy of zero tolerance for terror and violence against both sides.

A work plan developed by the Palestinian side will be shared with the U.S. and thereafter implementation will begin immediately to ensure the systematic and effective combat of terrorist organizations and their infrastructure.

In addition to the bilateral Israeli-Palestinian security cooperation, a U.S.-Palestinian committee will meet biweekly to review the steps being taken to eliminate terrorist cells and the support structure that plans, finances, supplies and abets terror. In these meetings, the Palestinian side will inform the U.S. fully of the actions it has taken to outlaw all organizations (or wings of organizations, as appropriate) of a military, terrorist or violent character and their support structure and to prevent them from operating in areas under its jurisdiction. 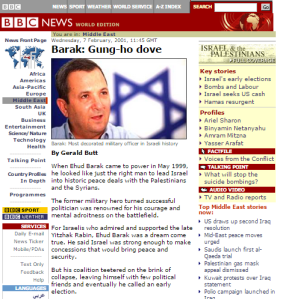 After the failure of the 2000 Camp David summit, the Palestinian Authority initiated the second Intifada and terrorism reached new heights. Following Ehud Barak’s resignation, prime ministerial elections held in February 2001 were won by Ariel Sharon and a national unity government was formed. Remarkably, a BBC profile of Ehud Barak from the time of that election makes no mention of the intifada which was raging at the time, stating:

“In the search for peace, in particular, the Barak government made much less progress than had been expected.

Rather than pressing ahead and making territorial concessions to the Palestinians when he enjoyed widespread support, he dithered. That allowed his opponents time to regroup and put pressure on him.”

The national unity government ruled until the next general election in January 2003 which was won by the Likud headed by Sharon. BBC coverage of that election includes the following analysis which is particularly interesting in light of the corporation’s contemporary portrayal of the “impassable barrier” – the anti-terrorist fence: 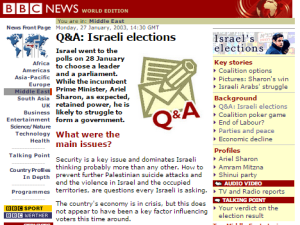 “Mr Sharon favours a get-tough security agenda and refuses to talk peace with the Palestinians until the bloodshed ends. Much of his support comes from his uncompromising stance against Palestinian militants and the widely-held view of him as the leader who can best shield Israelis from harm.

The Labour leader favours swift negotiations with the Palestinians, and if this fails, a unilateral Israeli withdrawal from all of Gaza and most of the West Bank, along with the dismantling of many of the Jewish settlements. He also advocates the building of an impassable barrier to keep the Palestinians out of Israel.”

In 2004 Sharon proposed Israeli withdrawal from the Gaza Strip and that process was completed in August 2005. In November 2005 Ariel Sharon split from the Likud party to found Kadima. His hospitalization in January 2006 left Ehud Olmert as acting prime minister and Kadima won the subsequent March 2006 election. BBC coverage at the time portrayed Kadima as “a centrist party to unite moderates from the right-wing Likud party and centre-left Labour” running on a platform of “partial disengagement from the occupied territories”.

Escalating Hamas terrorism in the Gaza Strip caused many Israelis to adjust their view of the wisdom of the 2005 disengagement from that area and the ‘land for peace’ formula in general. Nevertheless, Ehud Olmert made an offer to the Palestinians in 2008 which included Israeli withdrawal from 93% of the territory re-captured from Jordan in 1967. That offer was of course refused.

The early elections in February 2009 saw Kadima win, but unable to form a government. BBC coverage of that election (held shortly after Operation Cast Lead) included the following portrayal of a war started by Hizballah and a military operation caused by Hamas missile fire at civilian targets: 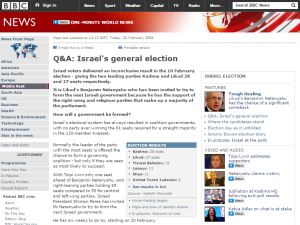 “Despite it [sic] “pro-peace-deal” agenda Kadima has presided over two wars in its three years in power – the 2006 Lebanon war and the recent operation against Hamas in Gaza.”

Nine months after a Likud government was formed following the 2009 election, a ten-month freeze on construction in Judea and Samaria was announced in an effort to restart negotiations. The Palestinian Authority failed to come to the negotiating table for nine of those ten months and subsequently refused to continue with talks after the freeze expired.

After an additional election in January 2013 won by the Likud, Israel engaged in nine months of negotiations with the PLO which ended in April 2014 when, after Israel’s release of dozens of convicted terrorists as yet another ‘goodwill gesture’, Fatah and Hamas chose to sign a reconciliation agreement and form a unity government.

The BBC’s Middle East editor claims to have been covering Israeli elections for nineteen years – since 1996. That length of time should surely have been sufficient for him and his colleagues to recognise the fact that no matter which Israeli political party has won elections over the past twenty-three years, all attempts to bring an end to the Palestinian Israeli conflict have been met with a negative – and often violent – response from the other side.

And yet, despite its obligation to “build a global understanding of international issues” the BBC continues its simplistic, dumbed-down, narrative-driven portrayal of the ‘peace process’ as being entirely dependent upon the paper placed in the ballot box by Israeli voters.