The BBC editorial guidelines – which of course apply to all content broadcast by the corporation, including commissioned programmes – include guidance on live output which has a sub-section titled ‘Offensive Comments’.

With that in mind, let us take a look at how the presenter of the BBC World News current affairs programme ‘Dateline London’ – Gavin Esler – dealt with comments made by one of his guests in a section of the August 8th edition of that show. 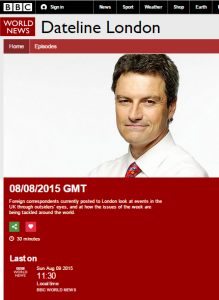 “…Israel has been proud of its place as a stable democracy but an attack on a gay rally in Israel plus another attack in which a Palestinian child was burned to death – and his father has also died – have led to a lot of heart-searching within Israel about Jewish religious extremism. And there’s a bigger picture too; after the nuclear deal with Iran and anti-Semitic attacks on the rise in Europe, do Israelis feel more vulnerable now than for years?”

One might perhaps have thought that such a question would be best answered by an Israeli but at that point Esler turns to his studio guest Rachel Shabi, asking:

“I mean just first of all, the attack on the gay rally has caused…and the Palestinian boy…has caused real, real….I suppose heart-searching…yes?…in Israel.”

Given her record – which includes a 7-month stint in Doha working for Qatar’s Al Jazeera – Shabi’s politicized response and her failure to answer the original question surely cannot have come as much of a surprise to Esler.

Shabi: “It has caused heart-searching but it’s very much…ehm…in the context of, you know, wild weeds, bad apples…ehm….so the…ehm…settler extremists that burnt to death an 18 month-old baby  – and his father Saad Dawabshe has just died from his injuries today – ahm…that was seen as an extreme and an exceptional act….ehm….whereas, you know, the reality of this situation is that, you know, that the occupation and the settlement project which is the thing that Israel does best – it’s the thing that Israel funds the best – ahm…is the sort of thing….is exactly the sort of thing that creates and enables and gives impunity to this sort of violence. And it’s certainly not the first time that there has been this sort of violence. Even Israeli human rights groups report…eh…numerous arson attacks – I think eight attempts to burn down houses in the last year – hundreds of attacks on churches, on mosques, on fields, on trees, on people. Ahm…this is nothing new…ah…and there is a culture of impunity within Israel….ehm…..that Israeli settlers are never brought to charge, brought to account.”

In addition to making no effort to inform viewers that Shabi’s unequivocal claim that the attack in Duma was perpetrated by “settler extremists” is unsupported seeing as no-one has yet been charged with the crime and failing to clarify that her claims that “the settlement project” receives the most government funding and that “Israeli settlers” are “never brought to charge” do not stand up to factual scrutiny, Esler refrains from making the required attempt to distance the BBC from her stereotypical smearing of the half million people BBC audiences are used to seeing described as ‘settlers’.

In fact, the phrasing of Esler’s next question even provides implied back up to Shabi’s spurious claims:

“Do you think that’s changing because of this – or will change – and also because of the way it’s viewed around the world? Because there are those who think…eh….Israel has never lacked as many friends as it does now in the past fifty years and that’s a narrative that’s perhaps one of the few things in this that people tend to agree on.”

Shabi dodges that question too in favour of exploitation of the platform provided by the BBC – and the murder of a toddler – for escalation of her politically motivated vitriol.

Shabi: “Well I think, you know, the context is that, you know, we’re looking at a very right-wing government that is constantly enabling and facilitating the settlement project, so however much it says, you know, and it’s called this an act of terror – which is quite unusual to call Jewish violence terrorism – however much it says that, it actually is part of the problem that’s fueling this. And I think we have to pan a little wider; I mean, you know, I don’t really wanna get too sort of gruesome about it but the Gaza war last year – of the 500 children who were killed, dozens of those were babies and toddlers. Some of them were only weeks old. So in some sense there is a brutality of Israel’s policy that on a national level, that sort of killing of children is the price tag.”

Gavin Esler’s response to that medieval-style defamation of Israel as a nation with a policy of brutally and deliberately killing babies is…nothing: he immediately turns to his next guest.

Although no-one has yet been charged with carrying out the terror attack in Duma, the BBC clearly does not consider it to be a problem when its content promotes unproven claims concerning the identity of the attackers, the crude stereotyping of half a million people described by the BBC as ‘settlers’ and defamatory libel against an entire nation. So much for its self-styled accolade “the standard-setter of international journalism” and so much for the editorial guidelines which ostensibly safeguard that title.