Visitors to the BBC News website’s Middle East page on September 6th and 7th may have been somewhat surprised to find that a domestic Israeli story about a budget disagreement between the Ministry of Education and institutions in the private schools sector had been deemed by editors to be worthy of international amplification.

However, anyone with background knowledge of this story who read the article titled “Protesters rally over funding for Christian schools in Israel” could be left in no doubt as to the underlying editorial considerations which prompted its publication. 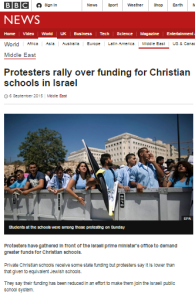 “Protesters have gathered in front of the Israeli prime minister’s office to demand greater funds for Christian schools.

Private Christian schools receive some state funding but protesters say it is lower than that given to equivalent Jewish schools.

They say their funding has been reduced in an effort to make them join the Israeli public school system.

The country’s 47 Christian schools have been on strike since the beginning of the school year on 1 September.

Ibrahim Fakhouri, a parent from Nazareth, was at the demonstration and said he believed Christian schools were being discriminated against.

“As citizens of this country, we are law obeying citizens, and we deserve equal rights,” he told AP.

Arab members of parliament were also at the demonstration.”  [emphasis added]

So the take-away message in this article is very clear: readers are given to understand in those 131 words that there is discrimination against Christian Arabs in Israel in the form of lower funding for their schools in comparison to Jewish schools. Only at the end of the article are readers provided with a second-hand fifty-word response from the Ministry of Education and in order to fully comprehend it they would have to have some prior knowledge of the system of categorisation of schools in Israel – which the BBC does not offer.

“In response to the protest the education ministry said that “Christian schools are funded in an equal manner as other recognized but unofficial schools in the State of Israel,” according to the Jerusalem Post.

It reported the ministry as saying it “is having meetings with representatives of the educational institutes”.”

This story actually began in May 2013 when the Ministry of Education announced across the board budget cuts. Some of those cuts were made to the budgets of state schools and in addition, the Ministry of Education informed approximately 250 other schools of cuts to certain clauses of funding. Those schools are not state schools: they are private institutions categorized as ‘recognised but not official’ and they include, for example, some Jewish religious schools, some Christian schools, some Muslim schools and some schools from the Anthroposophic (Waldorf) and Democratic streams. In 2014 a petition from a number of those schools was heard by the Supreme Court – details of that case can be found here (Hebrew).

Whilst one can of course debate the issue of those budget cuts to the non-state school sector, what is clear is that they were made to private schools of many differing types in accordance with their classification and not – as overwhelmingly implied in this BBC article – because of the religion or ethnicity of their pupils.

In other words, the BBC has misrepresented this story in order to promote the false impression of discrimination against Christian Arabs by the state of Israel.

In addition, under the heading “more on this story” readers of this report are offered a link to a previous BBC article by Yolande Knell which has still not been amended to correct the inaccurate claim that renewed construction of the anti-terrorist fence near the Cremisan Valley will “separate over 50 families from their land”.