While working on two articles documenting the questionable methods and associations of the Tamimis of Nabi Saleh – who for years have been organizing almost weekly confrontations with the IDF – I came across an op-ed published in the Guardian that cheered a viral video showing Tamimi women and children fighting off an armed Israeli soldier trying to arrest one of the Tamimi children for stone throwing. Another Guardian article on the same topic offered a somewhat more nuanced take, but aside from noting that there “is evidence that the Tamimis are acutely aware of the value of such footage in their activism,” the article also avoided any serious criticism of the participation of the Tamimi children in efforts to provoke IDF soldiers in front of the watchful cameras operated by their parents and other family members.

While I had no illusions that the Guardian would be interested in exposing the harsh views of the elder Tamimis about their children’s “duty” to “resist,” I thought the fact that I used to be a Guardian contributor a few years ago might slightly improve the chance that Guardian editors would consider publishing the fairly restrained criticism of the Tamimis’ exploitation of their children I submitted. But since my submission was immediately acknowledged in an automatic reply, I haven’t heard anything for the past two weeks – which obviously means the Guardian is not interested in evidence that the Tamimis relentlessly push their children to engage in potentially lethal stone-throwing and other provocations, and that they feed the media whatever lies and fabrications seem most useful at any given moment.

Below is the post I submitted to the Guardian; however, I should note that since I wrote it, I have become increasingly convinced that when the Tamimis invoke their “right to resist,” they also mean the “right” to commit murder. This is particularly obvious in statements reported by an Israeli news site and highlighted in a recent post at the blog of Frimet and Arnold Roth, who lost a daughter in the 2001 Sbarro pizzeria massacre masterminded by Ahlam Tamimi. As the Roth’s translation of the Hebrew original shows, Bassem Tamimi’s wife Nariman – the mother of the child stars of the recent viral video – declared in no uncertain terms:

“What she [Ahlam Tamimi] did was an integral part of the struggle. Everyone fights in the manner in which he believes. There is armed uprising, and there is popular uprising. I support every form of uprising.”

“We have the right to resist. Our children are doing their duty and must be strong.” That was the terse response offered by Bassem Tamimi to an obviously critical question about the regular participation of his children in weekly demonstrations that often include efforts to goad Israeli soldiers into reacting to rock-throwing and other provocations.

This time, the question came in the wake of a viral video that showed a fully armed Israeli soldier attempting to arrest Bassem Tamimi’s terrified 12-year-old son Mohammad on August 28, after one of the almost weekly demonstrations that Bassem Tamimi has been organizing for years in his West Bank village Nabi Saleh. It was not the first time that the activism of the Tamimis as a family attracted major media coverage. Two years ago, the Tamimis were prominently featured in a New York Times Magazine cover story authored by American writer Ben Ehrenreich, who had spent three weeks as a house guest of the Tamimi family and provided a very sympathetic account of their ambition to start a “third intifada.”

But even before, the Tamimis had been repeatedly in the spotlight, often due to the efforts of their photogenic daughter Ahed to challenge IDF soldiers. One of the most widely noted incidents was captured in another viral video that showed the then 12-year-old Ahed and several other children screaming furiously at Israeli soldiers. This and similar incidents have helped Ahed to achieve something like celebrity status: pro-Israel bloggers nick-named the blond girl Shirley Temper, Turkey’s Recep Tayyip Erdoğan invited her to receive an award (and an iPhone) for her “courage, ” and more recently,  the Al Jazeera Media Network AJ+ posted a wildly popular short clip on their Facebook page that promotes Ahed as the “14-year-old Palestinian girl [who] is leading protests in the occupied West Bank.”

Ahed’s parents Bassem and Nariman Tamimi are clearly eager to help promoting their daughter and have proudly shared the media coverage of her in countless Facebook posts (all of which are publicly accessible at the time of this writing). But some of these posts also reveal the enormous pressure the Tamimis exert on their children to fulfill “their duty” and continue to “resist” no matter the cost. A particularly disturbing example concerns several comments by both Bassem Tamimi and his wife Nariman relating to the incident in which their 12-year-old son Mohammad – who features in the recent viral video – broke his left arm. While the Tamimis have offered different explanations on this incident to the media, it is clear from posts they shared with the public immediately after Mohammad broke his arm on August 25 that he fell while throwing stones at an IDF jeep.

Bassem Tamimi has repeatedly made clear that he considers the throwing of stones and rocks as “a part of our [Palestinian] culture” and as integral part of an “authentic” popular struggle. He apparently also believes that no child is too young to engage in the “duty” to “resist”: in March, he uploaded a picture of three little boys struggling to block a road with large rocks, adding a comment that, translated from the original Arabic reads: “Oh, the generation of the coming victory, keep attacking, so that the homeland does not stay a hostage in trembling hands” [i.e. probably a reference to older people]. 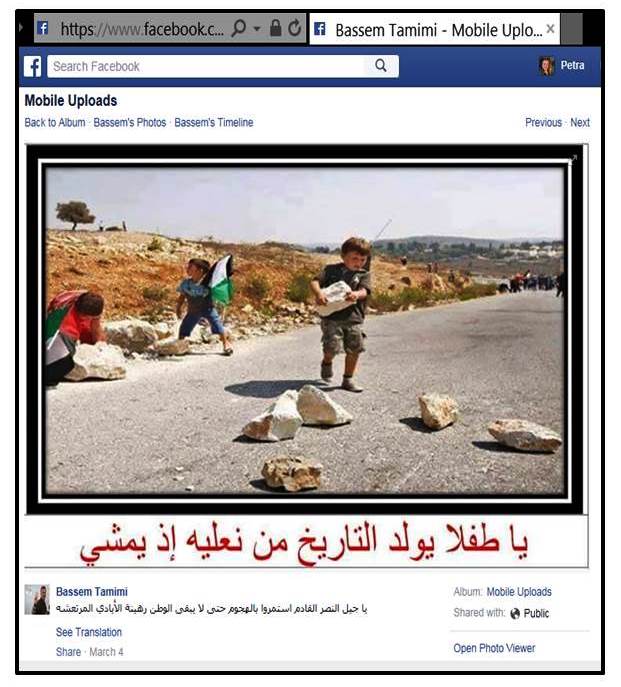 It is thus hardly surprising that Bassem Tamimi hailed his son as a “hero” after he broke his arm. Similarly, Nariman Tamimi explained in a post on her Facebook page that for her son, breaking an arm while throwing stones at an army jeep was no reason to stop. Translated to English, her post (that refers to her son Mohammad with his nickname Abu Yazan) reads:

“When you are wounded, your hand is broken, you put it in your shirt and put the edge of the shirt in your mouth and keep hitting the occupation with your pure stone – then you are my son, Abu Yazan, may Allah return you to me healthy, oh mother.”

Concerns expressed by one Facebook friend who remembered that this was already the second time Mohammad Tamimi had broken his arm were quickly rejected by Nariman Tamimi, who responded: “Either victory or martyrdom; and everything is going to be OK.”

But if “everything is going to be OK,” it will be so because the Israeli army is not quite as brutal and trigger-happy as the Tamimis usually claim. It is arguably revealing that Al Bawaba published a syndicated column that questioned in its headline if this was the “most cowardly Israeli soldier ever.” Equally revealing is a cartoon shared by the Tamimis after the incident: the image transforms the frightened and injured boy who was exhibited to the world as the victim of a brutal assault by an armed soldier into a little superman who needs just one arm to toss the hapless soldier into the air. A comment added by family member Bilal Tamimi reads in English: “Shatter the myth of the Zionist army at the hands of the children of Nabi Saleh.” 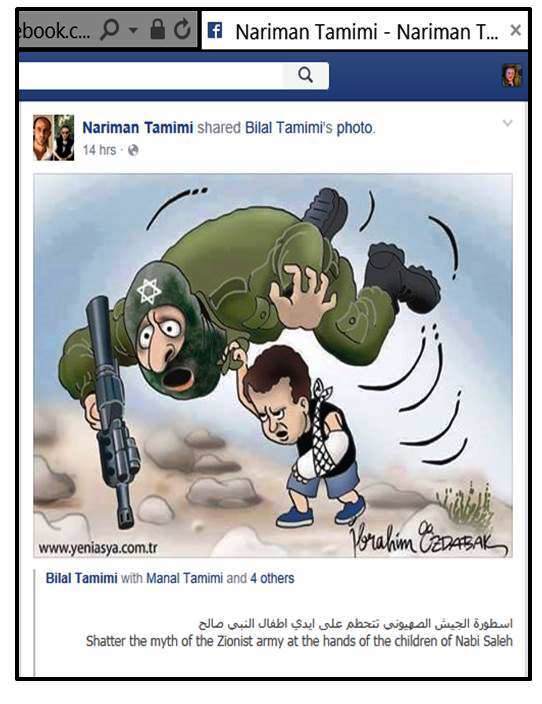 The Tamimis may feel that it is child’s play to “shatter the myth of the Zionist army,” but they perhaps also realize that not everyone is comfortable with this game. When Nariman Tamimi tried to justify in a recent interview why she insists on sending even their youngest child – a 9-year-old boy – to the weekly protests, she felt the need to fabricate a story, claiming there was no point trying to keep children safe at home because her son Mohammad had his arm broken sitting at home being hit by tear gas canisters that the IDF shot into the Tamimi house. Meanwhile, her husband told another reporter that Mohammad had broken his arm while fleeing an Israeli tank.

Perhaps the Tamimis should be pressed more often to explain why they send their children out to confront soldiers they regularly denounce as brutal and trigger-happy, and perhaps the stories they offer in response should be carefully checked by reporters.