Just two days after it managed to produce coverage of a terror attack on a Jerusalem bus without making use of the word terror, the BBC News website did find a use for that word.

An article appearing on the website’s Middle East page on April 20th was headlined “Israel arrests six members of ‘Jewish terror cell‘” and the same terminology was employed in the report’s opening lines. 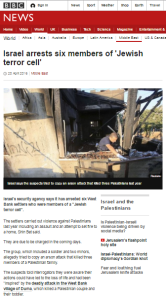 “Israel’s security agency says it has arrested six West Bank settlers who were members of a “Jewish terror cell”.”

Later on readers were told that:

“The suspects were connected to members of another ring of Jewish extremists who had recently been apprehended and accused of a series of attacks on Palestinian and Christian targets, according to the security agency.” [emphasis added]

This is of course not the first example of the BBC’s use of terms such as terror and extremists to describe Israelis – even though it consistently avoids such language when reporting on Palestinian terror and regularly employs euphemisms such as “resistance group” to describe the designated terrorist organisation Hamas.

Moreover, the BBC has previously supplied an ‘explanation’ for the double standards seen in its employment of the word terror.

“So what the BBC is actually saying here is that it makes use of the term “Jewish terrorists” – including not in direct quotes and in apparent contradiction to BBC editorial guidelines on ‘Language when Reporting Terrorism’ – because Israeli officials use such wording.

However, the rub lies in the fact that Palestinian officials will never be found using comparable terminology to describe their own citizens who carry out attacks against Israelis and so the BBC will not apply similar practice when reporting those stories.”

In this latest case too Israeli officials have not hesitated to use accurate terminology to describe the suspects and their actions and hence we find the above headline promoted on a website which, in stark contrast, just 48 hours previously refrained from describing the bombing of a public bus in which twenty people were injured as an act of terror.

As we have previously observed with regard to that editorial policy:

“The obvious outcome of that is a double standard according to which the accuracy of the terminology used by the BBC is dependent upon the honesty of the government or authority concerned – and that is clearly a big problem for a media organisation supposedly committed to accurate and impartial reporting.”