A report published by the Quartet was the subject of an article which appeared on the BBC News website’s Middle East page on July 1st under the title “Israel and Palestinians: Powers warn of ‘perpetual conflict’“. 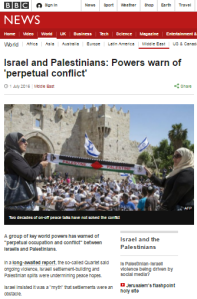 Near the beginning of the article, readers are told that:

In the latter point, the Quartet also noted “[t]he illicit arms build-up and militant activity” in the Gaza Strip but the BBC apparently found that unnecessary to report.

So how much coverage did the BBC devote to each of those three points in the rest of its article which – excluding the headline, sub-headings, photo captions and links – totals 736 words?

Ninety-one words were devoted to the topic of the lack of PA control over the Gaza Strip, including a sanitised portrayal of the violent Hamas coup which brought about that situation. No mention was made of the Quartet’s concern’s regarding terrorism and the smuggling and production of weapons or its call to terminate such activities.

“The report also points to the continuing splits in Palestinian governance of the West Bank and Gaza as an obstacle to peace, saying the territories “should be reunified under a single, legitimate and democratic Palestinian authority”.

There has been a deep rift between the two main Palestinian factions since 2007, when Hamas, which won elections the previous year, ousted forces loyal to President Mahmoud Abbas in Gaza and set up a rival government there.

A 2014 reconciliation agreement between the internationally recognised Palestinian Authority and Hamas has failed to take hold.”

In contrast, a total of two hundred and eighty-two words were assigned to the topic of “Israeli settlement expansion” and predictably the BBC promoted its usual partial mantra on the subject of ‘international law’.

“About 570,000 Israelis live in more than 100 settlements built since Israel’s 1967 occupation of the West Bank and East Jerusalem. The settlements are considered illegal under international law, though Israel disputes this.”

Readers of the BBC’s article found a total of 213 words – including background, portrayal of the report’s content and reactions – on the issue of violence, terrorism and incitement. Interestingly, the article promoted the standard “Israel says” formula before going on to quote the Quartet report.

“Israel says Palestinian incitement has fuelled the attacks. The Palestinian leadership has blamed frustration rooted in decades of Israeli occupation.

“Palestinian leaders have not consistently and clearly condemned specific terrorist attacks. And streets, squares and schools have been named after Palestinians who have committed acts of terrorism,” the report says.

It called on the Palestinian Authority to “act decisively” against incitement “including by clearly condemning all acts of terrorism”.”

As regular readers will be aware, the BBC has consistently refrained from providing its audiences with meaningful information about the incitement and glorification of terrorism from official Palestinian sources – including throughout the surge in terror which began in the autumn of 2015 – with the result that readers of this article would lack the context necessary to understand even that brief presentation of the Quartet’s statements on that issue.

As Raphael Ahern points out at the Times of Israel, that part of the Quartet report is in fact the most newsworthy.

“But there was something relatively remarkable about the otherwise routine report: its clear condemnation of Palestinian incitement. […]

A document undersigned by pretty much the entire international community has rarely, if ever, spoken so forthrightly about the subject. The report goes to considerable length in describing how Palestinian terrorists are glorified and, more importantly, takes the Palestinian leadership to task for failing to curb the ugly phenomenon.

The text notes that Hamas and “other radical factions” are behind the worst examples of incitement. “These groups use media outlets to glorify terrorism and openly call for violence against Jews, including instructing viewers on how to carry out stabbings.”

But the report doesn’t stop there. It fingers some “members of Fatah,” the party of Palestinian Authority President Mahmoud Abbas, for having “publicly supported attacks and their perpetrators, as well as encouraged violent confrontation.”

It even cites a senior Fatah official who praised terrorists as “heroes and a crown on the head of every Palestinian.””

Those getting their news from the self-styled “standard-setter for international journalism” must surely be asking themselves why they have heard little or nothing about that topic during the last nine months. The answer is that the BBC has consistently focused their attentions elsewhere; be it on the topic of ‘settlements‘ – as also seen in this article – or on the PLO approved theme of “the occupation“.

With the holes in the BBC’s politicised narrative having been clearly exposed in its account of the Quartet’s report, it is obviously high time for the corporation to finally get to grips with some serious reporting on the central subject of PA and Fatah incitement if it really intends to meet its remit of building an “understanding of international issues”.