A filmed report which appeared on the BBC News website’s homepage as well as on its ‘World’ and ‘Middle East’ pages on August 24th revisited the location of a previous BBC report from April 2012.

Back then, the report titled “Gaza zoo resorts to displaying stuffed animals” told audiences that:

“A zoo owner in Gaza has had to resort to displaying stuffed animals, because of a shortage of live ones.

Mohamed Owaida from the Khan Younis Zoo says it is proving too costly to feed his living animals, and he can not always get live specimens through the Israeli blockade of the Gaza strip.”

Around the same time, the Times of Israel also produced a report about that zoo.

“Flies swarm around some of the 10 animals that have been embalmed so far. The makeshift cages housing the exhibits — fashioned from fencing salvaged from Jewish settlements that Israel dismantled in 2005 — are littered with empty soda cans and other trash.

An emaciated-looking stuffed lion, its coat patchy and mangy, lies on an exhibit cobbled together from crates and shipping pallets. A monkey had missing limbs. A porcupine had a hole in its head.

The zoo’s 65 live animals, which include ostriches, monkeys, turtles, deer, a llama, a lion and a tiger, don’t fare much better. During a recent visit, children poked chocolate, potato chips and bread through the wire. There’s no zookeeper on the premises. Gaza has no government body that oversees zoos, and medical treatment is done by consulting over the phone with zoo veterinarians in Egypt.[…]

Owner Mohammed Awaida said he opened the “South Forest Park” in 2007, only to lose a number of animals during Israel’s military offensive against Hamas that began in December 2008. During the three-week offensive, launched in response to rocket attacks on Israel, Awaida said he could not reach the zoo, and many animals died of neglect and starvation.”

Earlier this year the international animal charity ‘Four Paws’ began trying to save the remaining animals in Khan Younis.

“The zoo at Khan Yunis is considered “one of the worst zoos in the world,” according to Dr. Amir Khalil, 51, an Egyptian-born veterinarian and director of project management at Four Paws, an international animal welfare organization. “It’s less than a zoo,” Khalil tells Haaretz. “It’s a prison.” […]

The zoo animals “are not in good condition,” notes Khalil, who lives in Vienna and directs the Gaza efforts from Amman, Jordan. “They are facing death, cold weather, no food, bad captivity, cages and no proper care,” he says.

On August 24th the last remaining animals were evacuated via the Erez crossing to new homes in Israel, Jordan and South Africa. The lone tiger is the subject of the August 23rd BBC filmed report titled “Gaza’s last tiger to leave for new home in South Africa“. 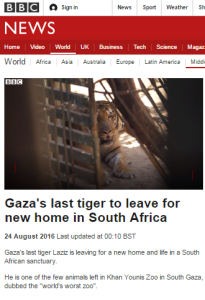 “There have been many troubles since Khan Younis zoo opened in 2007.”

Owner: “He [the tiger] has lived with me through three wars. He saw disaster and terror. He lived through difficult nights. Like all of us, like me.”

“Dozens of animals died during fighting between Palestinian militants and Israel.”

However, viewers of that report heard nothing of the starvation and substandard conditions to which the tiger and other animals had been subjected.

Obviously for the BBC, even an animal welfare story can be can be reframed to focus television audiences’ attentions on the politics of ‘the conflict’. A clue as to how that came about was found in the August 24th edition of the BBC Radio 4 programme ‘PM’ when presenter Carolyn Quinn introduced an item (from 25:40 here) by Yolande Knell, reporting “from Gaza”. 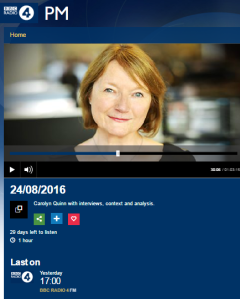 “He [the tiger] has lived with me through three wars. He saw disaster and terror. He lived through difficult nights. Like all of us, like me.”

Yolande Knell added her own commentary:

“Dozens of creatures died when he couldn’t reach the zoo during the last conflict between Hamas, which controls Gaza, and Israel.”

Knell then introduced interviewees with no relation to the story’s subject matter.

“In Khan Younis at the Mahali [phonetic] family home, the children show me their plastic zoo animals and I tell them Laziz [the tiger] is moving to South Africa.”

“Akram Mahali says daily life is a struggle. Neither he nor his six children have ever seen life outside Gaza and they’re not likely to any time soon. With Hamas in control of the Palestinian territory, both Israel and Egypt impose tight border restrictions and limit travel.”

Voiceover Mahali: “There is nothing nice in Gaza. Really if I could I would take them out. I wish I could. There is no money, no happy life and there is no work. There are power cuts. I see now the animals are living better than humans.”

Failing to make any mention of the very relevant context of the Hamas terrorism which has brought about “border restrictions”, a succession of conflicts and the delay in reconstruction of civilian structures in the Gaza Strip, Knell turned to another unrelated topic:

“Across Gaza people are still having their homes rebuilt after long delays. The last conflict caused massive destruction and killed more than two thousand Palestinians and over seventy Israelis.”

“Then, just after dawn, the animals leave Gaza. Their suffering will soon be over but they leave behind Palestinians who continue to feel trapped.”

Clearly telling BBC audiences the story of the relocation of abused animals from the Khan Younis zoo was of much less interest to Yolande Knell than the opportunistic promotion of her long apparent political agenda.