An audio version of the interview was heard by listeners to the BBC World Service radio programme ‘The Newsroom’. 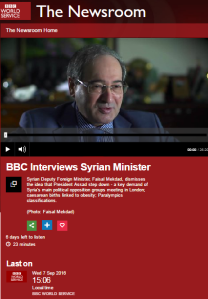 A filmed version of the interview was shown on BBC News television programmes and posted on the BBC News website.

In all versions of that interview – which was slightly edited on the different platforms – BBC audiences heard barely challenged denials from Faisal Mekdad with regard to the Syrian regime’s use of barrel bombs against the civilian population and the fact that most of the civilian casualties of the civil war have been caused by Assad’s forces and supporters.

Audiences also heard the following falsehood go completely unchallenged by the man whose job ostensibly includes the provision of “analysis that might make a complex story more comprehensive or comprehensible for the audience”.

“This is a war against Syria. This is war from, I mean, the most horrible…ah…I mean, forces in the entire world. Saudi Arabia and Qatar are giving money. Turkey is using its army. The United States and Western Europe – and particularly France and UK – are doing, I mean, whatever they can do to end the role being played by Syria. Israel is there in the middle of the conflict.” [emphasis added]

As any Middle East reporter worth his salt of course knows, Israel is not involved in the Syrian civil war and it is certainly not the cause of that conflict. Jeremy Bowen however did not bother to relieve BBC audiences of the inaccurate impression promoted by his interviewee and instead went straight on to his next question.

Not for the first time – see ‘related articles’ below – Jeremy Bowen’s reporting on Syria actively hinders the meeting of his employer’s obligation to “build a global understanding of international issues”.