As far as UNESCO is concerned, the site where once the Jewish temples stood – and where the Christian Bible situates important events in the life of Jesus – should rightly be known as the Muslim “Holy Site Al-Aqsa Mosque/Al-Haram Al-Sharif.”

October 13, 2016, was a momentous day in world history: the United Nations Educational, Scientific and Cultural Organization (UNESCO) voted to rewrite millennia of Jewish history by denying the Jewish connection to Jerusalem’s Temple Mount, which is Judaism’s holiest site. As far as UNESCO is concerned, the site where once the Jewish temples stood – and where the Christian Bible situates important events in the life of Jesus – should rightly be known as the Muslim “Holy Site Al-Aqsa Mosque/Al-Haram Al-Sharif.”

The UNESCO resolution also renames what Jews call the Kotel, i.e., the Western Wall (of the Temple Mount) and the area in front of it, as Al-Buraq Plaza, while using scare quotes when mentioning the common English term “Western Wall Plaza.” Well, what are a few millennia of documented Jewish history compared with a Muslim legend about al-Buraq, “a tall, white beast, bigger than the donkey but smaller than the mule” with “long ears” and “two wings on his thighs”? Muslims believe that one night, this creature took their prophet Muhammad “to the farthest Mosque” – which of course couldn’t possibly have been located in Jerusalem during Muhammad’s lifetime (supposedly 570 – 632 CE). In reality, the Muslim claim to Jerusalem was simply established by force when Muslim troops conquered the city 636-637.

Perhaps the best reaction to the preposterous UNESCO resolution would be the kind of ridicule Israel’s Ministry of Foreign Affairs offered on Twitter when they posted a few tweets and a short video with Bible texts “corrected” to conform to today’s UNESCO resolution. Given that UNESCO strongly condemns “the continuous storming of Al-Aqsa Mosque/Al-Haram Al-Sharif” by what they call “Israeli right-wing extremists and uniformed forces” – i.e. Jews (and other non-Muslims) visiting the Temple Mount and the security forces necessary to protect them from violent Muslims – it’s perhaps particularly urgent to revise the famous story of Jesus chasing merchants from the Temple’s court yards and to understand that UNESCO would firmly denounce Jesus for his inexcusable “storming of Al-Aqsa Mosque/Al-Haram Al-Sharif.” 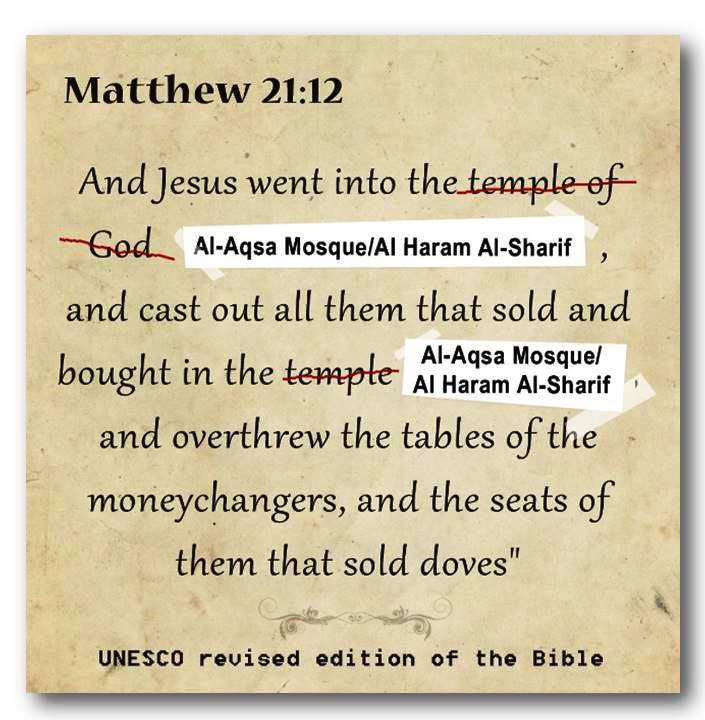 The countless Christian paintings of this scene and others depicting Jesus in the Temple should now also be properly relabeled; particularly countries like Italy, Spain, France and Sweden, which are surely in possession of many such paintings but couldn’t muster the backbone to reject the UNESCO resolution, should urgently devote themselves to the task of ensuring that their museums, churches and monasteries do not violate the UNESCO charade they acquiesced in so cravenly.

But while it may feel good to let some steam off by ridiculing UNESCO’s resolution, it is arguably a very serious matter. As Yair Rosenberg rightly noted in a Tablet post, the United Nations usually cloak their “animus” against Israel “in the garb of anti-Zionism.” But UNESCO now “dispensed with all pretense” by passing this “blatantly anti-Semitic resolution erasing Jewish ties to Jerusalem’s Temple Mount, Judaism’s holiest site.”

It is noteworthy that the UNESCO resolution was drafted by the Palestinians, and that the Fatah faction of Palestinian President Mahmoud Abbas reportedly praised its adoption as a “‘historic and strategic victory’ for the Palestinians,” which proved that “Jews have no historical ties to Jerusalem.” That comes roughly a year after Palestinians started a wave of murderous terror attacks, which Abbas encouraged by praising religious conflict and blessing “every drop of blood that has been spilled for Jerusalem,” declaring that the Palestinians should prevent Jews from desecrating the Al-Aqsa mosque with their “filthy feet.”

The Palestinians can now rightly feel that UNESCO has given this kind of incitement its stamp of approval. It is also worthwhile recalling in this context that the fantasy that the Al-Aqsa mosque is threatened by Jews is an invention that goes back to Haj Amin al Husseini, the Mufti of Jerusalem, who later gained notoriety as a Nazi collaborator. After al Husseini renovated the Haram al-Sharif in the 1920s, he began to accuse “the Zionists” of plotting to rebuild the Jewish Temple. His incitement contributed to repeated outbreaks of violence against Jews, culminating in the Hebron massacre of 1929. And not that long ago, we had the bloody “Al-Aqsa Intifada” – perhaps UNESCO feels it’s time for another one?

As the UNESCO constitution rightly observes in its opening statement, “wars begin in the minds of men,” and therefore “it is in the minds of men that the defences of peace must be constructed.” UNESCO could and should know that a genocidal Muslim war against Jews is prophesized in a popular hadith that is not just cited in the Hamas Charter, but has been quoted and defended by the influential “Global Mufti” Yusuf Qaradawi in his “Fatawa on Palestine:”

“[W]e believe that the battle between us and the Jews is coming … Such a battle is not driven by nationalistic causes or patriotic belonging; it is rather driven by religious incentives. This battle is not going to happen between Arabs and Zionists, or between Jews and Palestinians, or between Jews or anybody else. It is between Muslims and Jews as is clearly stated in the hadith. This battle will occur between the collective body of Muslims and the collective body of Jews i.e. all Muslims and all Jews. (p. 77)”

Precisely because wars indeed “begin in the minds of men,” UNESCO has done its part to reinforce the vicious notion that Muslims and Jews are destined to fight a divinely ordained war “driven by religious incentives.”

In this context, there is yet another important aspect to this despicable UNESCO resolution. While the term “cultural genocide” is not frequently used by the UN and academics still work to define it, UNESCO’s effort to Islamize the Temple Mount could arguably be seen as encouraging at least what is described in one of the organization’s own reports (pdf) as “cultural cleansing that seeks to destroy the legitimacy of the ‘other’ to exist as such.” The very same report cites UNESCO Director-General Irina Bokova memorably asserting that “Culture and heritage are not about stones and buildings – they are about identities and belongings. They carry values from the past that are important for the societies today and tomorrow.”

This is exactly why the Palestinians regard the adoption of this resolution as an important victory. And because wars begin in the minds of men, October 13, 2016, marks the day when UNESCO in effect joined the long Arab-Muslim fight to deny the historic Jewish connection to the Land of Israel, and implicitly legitimized the wars, terror and violence that have been and will be employed in the ongoing efforts to undo the establishment of the world’s only Jewish state. Only six countries voted against the resolution: the US, the UK, the Netherlands, Germany, Lithuania and Estonia – which demonstrates once more what kind of backing Israel can expect when the “international community” urges the tiny Jewish state to take risks “for peace.”