The Israel Security Agency’s report on terror attacks (Hebrew) during December 2016 shows that throughout the month a total of 98 incidents took place: 87 in Judea & Samaria, ten in Jerusalem and one attack from the Gaza Strip.

The BBC News website did not provide coverage of any of the 98 attacks which took place during December.

Throughout the whole of 2016 the BBC News website reported a total of thirty-nine incidents – i.e. 2.8% of the terror attacks which actually took place. Only one of the ten barrages of missile attacks from the Gaza Strip which took place during 2016 received (belated) English language coverage. In contrast with the previous year, the BBC did report all the Israeli fatalities resulting from terror attacks that occurred during 2016. 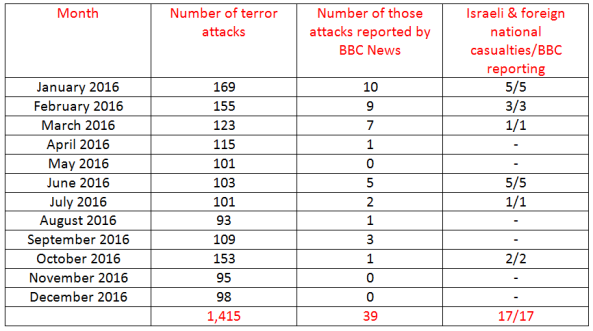 The BBC’s public purpose remit includes ‘Global Outlook’ which is interpreted by the BBC Trust as meaning that audiences “can expect the BBC to keep them in touch with what is going on in the world, giving insight into the way people live in other countries” and includes the pledge to “build a global understanding of international issues” and “enhance UK audiences’ awareness and understanding of international issues”.

With the BBC News website having covered of just 2.8% of the terror attacks against Israelis throughout 2016 and with none of those reports, or any other, having clarified the all-important context of the scale of attacks as a whole, it is obvious that neither global nor domestic audiences are being adequately provided with “insight” into how Israelis live.

The absence of that information is important because it means that audiences are unable to properly understand Israeli counter-terrorism measures such as the anti-terrorist fence or checkpoints. It also means that when Israel is obliged to respond to rising terrorism (as seen for example in the summer of 2014), audiences and BBC journalists alike are unable to put events into their appropriate context and thus arrive at uninformed and inaccurate conclusions.

Reviewing the BBC News website’s coverage of terror in Israel: April to September 2016