The BBC's Middle East editor promoted claims of 'war crimes' when civilians were killed in Gaza in 2014. Three years on in Mosul, Jeremy Bowen's reporting is markedly different.

The BBC has recently produced several reports concerning an incident in Mosul, Iraq, in which a large number of civilians are alleged to have been killed during a strike on ISIS forces.

“The US military has acknowledged that aircraft of the coalition fighting so-called Islamic State (IS) in Iraq hit a location in west Mosul where dozens of civilians were reportedly killed. […]

The US Central Command said the planes acted at the request of Iraqi security forces. It did not name which country’s aircraft carried out the attack.

In its statement, it said “an initial review of strike data” indicated that an air strike on 17 March was carried out in western Mosul “at the location corresponding to allegations of civilian casualties”.

The coalition “takes all allegations of civilian casualties seriously and a formal Civilian Casualty Credibility Assessment has been opened to determine the facts surrounding the strike”, it went on.

The details of what happened are still unclear, but reports have suggested the strikes killed more than 100 people. The number of victims could not be independently confirmed.”

“The United Nations has raised grave concerns about reports of high civilian casualties in the Iraqi city of Mosul.

A senior UN official in Iraq said she was stunned by accounts of “terrible loss of life”, after claims that at least 200 people had been killed in air strikes by the US-led coalition.”

“Iraq’s military has cast doubt on reports that an air strike by the US-led coalition caused the deaths of dozens of civilians in west Mosul.

Instead it blamed explosive booby-traps set by so-called Islamic State (IS).

The US said on Saturday that it was investigating an air strike on 17 March at “the location corresponding to allegations of civilian casualties”.”

“The people who’ve been coming in have been talking about what they’ve been through. They’ve talked about airstrikes that have come in in the last few days and killed – as well as killing people from Islamic State – have killed hundreds of civilians. They’ve complained that the jihadists have used them as human shields. But they’ve also – in tears and in anger – spoken very bitterly about the effects of airstrikes on civilians. I spoke to multiple witnesses who said that there are perhaps hundreds of bodies still lying in the rubble that people can’t get to.”

‘‘No pause to attacks against IS’ in West Mosul‘ Jeremy Bowen, BBC television news and BBC News website, March 26th 2017

“…I’ve seen them [Iraqi forces] using some quite primitive, inaccurate weapons. Now that may help when it comes to killing the fighters from the jihadist group Islamic State but if they’re inaccurate they may well also kill more civilians if civilians are in the area that is being attacked.”

Bowen: “He [interviewee Mahmoud] was furious that so many civilians had died in the airstrikes.”

Mahmoud: “They are still under the rubble. No-one has saved them yet. The airstrikes are non-stop. They are happening 24 hours a day. They are killing innocent people. Why are they attacking us? We did not do anything wrong.”

Bowen: “Do you think this is the way to fight Daesh – to fight Islamic State?”

“Israel says it tries hard to make sure civilians don’t get killed. It says it targets Hamas and its fighters. […] The UN human rights commissioner says there’s serious doubt Israel is complying with the laws of war that protect civilians.” 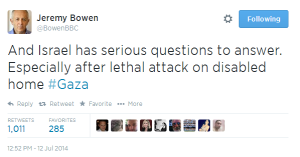 Bowen: “Belligerents are obliged under the laws of war to protect civilians. The UN has already asked whether Israel is working in the way that it should to fulfil those obligations. After the attack on the centre for the disabled, it is clear that the Israelis have some serious questions to answer.”

Bowen: “Back in Gaza in the bombed fishing port, Raji Sourani – a Palestinian human rights campaigner – said Israel’s tactic of destroying the homes of men it says are Hamas fighters guarantees it will also kill non-combatants: neighbours, families, children.”

Sourani: “They know they committed war crimes, crimes against humanity – and deliberately. Intending to destroy houses where civilians living in it that’s totally illegal in a clear-cut way Geneva Convention article 52 paragraph 3.” […]

Bowen: “Smoke from burning buildings spread across Gaza as Palestinians buried men they said were fighting in a legitimate resistance. Israel calls them terrorists.”

After having left the Gaza Strip, Bowen penned an article for another media outlet in which he claimed to have seen “no evidence of Hamas using Palestinians as human shields”.

In contrast, in his reporting from Mosul Bowen was able to inform BBC audiences of ISIS’ use of human shields and did not find it necessary to promote either his own amateur opinions on the legality of the alleged incidents nor unproven accusations of deliberate targeting of civilians and ‘war crimes’.

Differing BBC definitions of human shields in Iraq and Gaza

Comparing BBC reporting on human shields in Gaza and Iraq