Three examples of stories BBC audiences will not be told.

As has been noted in previous posts (see related articles below) concerning the BBC’s coverage of the hunger strike by convicted Palestinian terrorists serving time in Israeli prisons, while audiences have been told that the strike’s aim is to “protest detention conditions”, they have not been informed in any of the BBC’s reports what those conditions entail or exactly what the strikers are demanding.

On May 15th the strike leader Marwan Barghouti’s list of nineteen demands was published. 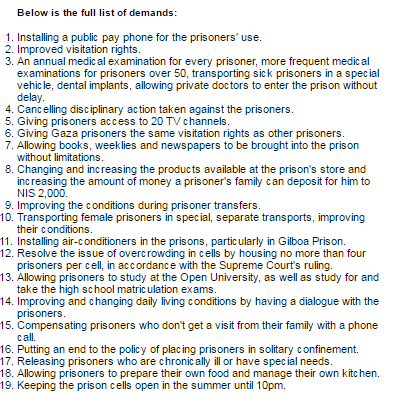 Also apparently among the leaders of the hunger strike are two cousins – Karim and Maher Younis – who are both serving 40 year sentences for the kidnapping and murder of Israeli soldier Avraham Bromberg in the early 1980s. Earlier this month (while Mahmoud Abbas was visiting the White House and telling the US president that the PA is “raising […] children […] on a culture of peace”) a Palestinian Authority official and the PLO announced that a main street in Jenin is to be named after Karim Younis. This week a square in the town of Tulkarem was named after the other cousin, Maher Younis.

As recently as last week BBC World Service audiences were told that Israel “has long accused Palestinian officials” of glorifying terrorism but seeing as the BBC consistently avoids reporting stories such as the naming of streets, squares, schools and sports tournaments after terrorists, its audiences are not in a position to know whether such charges are true.

Another story that BBC audiences are unlikely to be told is that of a Palestinian Legislative Council MP from Fatah (previously imprisoned for membership in a terrorist organisation) who was recently caught on camera hurling rocks during a riot. 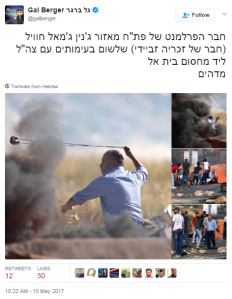 “A Palestinian Authority lawmaker recently took part in violent clashes against Israeli security forces in the West Bank, images of which were published on Monday.

In the photos, Fatah party member Jamal Hawil can be seen using a slingshot to hurl rocks at Israeli troops during a riot at the Beit El junction amid large plumes of smoke, as well as taking cover behind makeshift barricades alongside other protesters.

Asked by Channel 2 to comment on the images, Hawil tried to downplay the significance of a PA official throwing rocks at Israeli soldiers.

“It doesn’t matter if I threw rocks or not, the entire Palestinian nation throws rocks,” he said.”

As readers may recall, on May 3rd the BBC News website inaccurately informed audiences that during Mahmoud Abbas’ visit to the White House, the US president had “stressed there would be no lasting peace unless both nations found a way to stop incitement of violence”. The BBC, however, consistently fails its audiences by refraining from providing the readily available information which would enhance their understanding of the involvement of the Palestinian Authority and its ruling party Fatah in promoting violence, incitement and glorification of terrorism.

Identifying the BBC’s anonymous “mother of a Palestinian inmate”