The BBC's latest report on the US embassy relocation story recycles five and a half months of previous omissions.

Since mid-December 2016 the BBC has been telling its audiences that relocation of the United States embassy in Israel to Jerusalem is on the cards. During those five and a half months, numerous BBC reports on that topic have been aired or published, with many if not most of them providing amplification for unchallenged PLO messaging to the effect that such a move would bring an end to the chances of a solution to the Palestinian-Israeli conflict and spark regional violence.

“A senior Palestinian official warned that such moves “will be the destruction of the peace process”.

Veteran negotiator Saeb Erekat said moving the embassy and “annexing” settlements in the West Bank would send the region down a path to “chaos, lawlessness and extremism”.” (BBC News website, 16/12/16)

““If this is the decision, to transfer the embassy to Jerusalem, it will not help peace and we hope it doesn’t happen,” President Abbas told reporters outside the Vatican.

Palestinian officials say the plan would undermine chances of a negotiated peace based on a two-state solution, in which Palestinian and Israeli states would live side-by-side.

“Not only would this move deprive the United States of all legitimacy in playing a role in conflict resolution, it would also destroy the two-state solution,” Mr Abbas was quoted earlier as saying in French paper Le Figaro.” (BBC News website, 14/1/17)

““This is very dangerous what President-elect Trump wants to do,” Palestinian official, Mohammed Shtayyeh tells me. “It is American recognition that Jerusalem is part of the State of Israel.”

“We would consider this American move as an end to the peace process, an end to the two states and really putting the whole region into chaos.”” (BBC News website, 14/1/17)

“The conference comes at a time of rising tension in the region, and there are fears President-elect Trump’s plans to move the US embassy from Tel Aviv to Jerusalem could stoke it further.

There was deep alarm among participants at the conference that if President Trump does break with decades of US policy and move the embassy to Jerusalem, then conditions will be set for another upsurge in violence in the region, says the BBC’s Hugh Schofield in Paris.” (BBC News website, 15/1/17)

“And the Palestinians are basically saying that any move for a US embassy – bringing it from Tel Aviv to Jerusalem – would kill the two-state solution; this long-standing goal of international policy on this conflict.” (BBC Radio 4, 15/1/17)

“Palestinian minister Mohammed Shtayyeh says this would kill hopes for creating a Palestinian state. “For us we consider Jerusalem as a future capital of the State of Palestine, so having the president moving the embassy there, then it is an American recognition that Jerusalem is part of the State of Israel. That’s why we consider this American move as an end to the peace process; an end to two states and really, putting the whole region into chaos.”” (BBC World Service radio, 14/1/17)

“…this is serious cause for alarm and if it moves its embassy then there’s no reason to talk about any peace solution because it’s finished; it’s done for.” (BBC World News, January 2017)

“If the US moves its embassy then there’s no reason to talk about any peace solution because it’s finished; it’s done for.” (BBC Radio 4, 6/2/17)

“And the idea of Trump moving the embassy of the United States to Jerusalem is against international law […] If he does that he is just ruining the entire peace process. He is defying the international law and he knows very well that moving the embassy to Jerusalem is a breach to all kinds of agreements; to all UN Security Council, believing that Jerusalem is the united capital – the eternal capital – of the State of Israel. That will dramatically shift the entire game and the entire negotiations and the entire peace process. If he does that, this is a recipe for another intifada…” (BBC Radio 4, 15/2/17)

“David Friedman favours relocating the US embassy to Jerusalem, a highly inflammatory proposal because both Israel and the Palestinians lay claim to the city as their capital.”(BBC News website, 10/3/17)

However, as has been repeatedly observed on these pages, in all of its reports on the topic, the BBC has not once provided its audiences with any explanation as to why the transfer of a foreign embassy to a location in Jerusalem to which the BBC repeatedly tells its audiences the PA does not lay claim should be an obstacle to a negotiated settlement.

As has also been noted, despite making claims that the proposed relocation would be “break with decades of US policy”, the BBC has not bothered to inform its audiences of the existence of the 1995 US Embassy Relocation Act. Nevertheless, a vague reference to that legislation appeared in the opening sentences of a report that appeared on the BBC News website’s US & Canada and Middle East pages on June 1st under the headline “Trump delays moving US embassy to Jerusalem“. 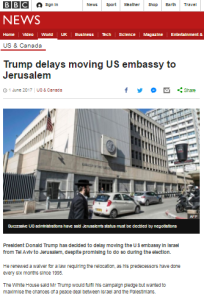 “President Donald Trump has decided to delay moving the US embassy in Israel from Tel Aviv to Jerusalem, despite promising to do so during the election.

He renewed a waiver for a law requiring the relocation, as his predecessors have done every six months since 1995. […]

On Thursday, as a deadline loomed, the White House announced that Mr Trump had continued his predecessors’ policy of signing a six-month waiver for the Jerusalem Embassy Act.”

As in previous reports, PLO messaging on the topic is given unquestioning amplification.

“Palestinian leaders had warned the move would threaten a two-state solution.”

During January of this year no fewer than three BBC reporters (Yolande Knell, Tim Franks and Mark Lowen) visited the plot of vacant land next to the US Consulate in the Jerusalem neighbourhood of Talpiot that, as Knell put it at the time, has “long been reserved for a US embassy”. Despite the fact that the said plot lies on the Israeli side of the 1949 Armistice Agreement lines, nowhere in this article are readers informed of its location.

Moreover, immediately after they have been told that “the move would threaten a two-state solution”, readers find the following:

“Israel has occupied East Jerusalem since the 1967 Middle East war. It annexed the area in 1980 and sees it as its exclusive domain. Under international law the area is considered to be occupied territory.

Israel is determined that Jerusalem be its eternal, indivisible capital. But Palestinians want East Jerusalem to be the capital of a future state.”

Clearly that would prompt readers to mistakenly assume that the proposed site for an American embassy in Jerusalem is located on land the BBC describes as “occupied” – without providing any information whatsoever concerning its actual occupation by Jordan during the 19 years prior to 1967. 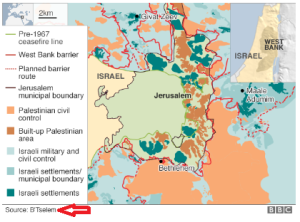 In addition, this article included a partisan map produced by the political NGO B’Tselem which has been repeatedly seen in previous BBC News website content.

That map of Jerusalem portrays places such as the Jewish quarter in the Old City, Neve Ya’akov and even the Hebrew University on Mt Scopus (which never came under Jordanian occupation) as ‘Israeli settlements’, despite the fact that Jews purchased land and lived in those and other areas long before they were ethnically cleansed by the invading Jordanian army in 1948.

The BBC’s repeated use of that inaccurate and politically partisan map indicates that the corporation is not committed to accurately and impartially informing its audiences about the geo-political situation in Jerusalem.

Likewise, six months of recurrent unquestioning promotion of PLO messaging concerning the proposed relocation of the US embassy to Jerusalem, the repeated lack of clarification to audiences where that embassy would be located and the chronic failure to explain existing US legislation on the issue shows that the BBC’s presentation of this topic to audiences also fails to meet its professed standards of accuracy and impartiality.

BBC continues to push its monochrome US embassy story