The BBC's double standards on civilian casualties in warfare are apparent in interviews with pilots from the UK and Israel.

Just two weeks ago listeners to BBC Radio 4 were once again given an inaccurate and misleading portrayal of the meaning of proportionality in war by the corporation’s Middle East editor Jeremy Bowen.

“When the wars flare up more Palestinians are killed than Israelis, including many more civilians. […] The laws of war say belligerents shouldn’t use disproportionate force. Israel always denies doing so when it attacks Gaza but the evidence suggests that it does. The Israelis claim to take great care not to kill civilians but they use heavy weapons in densely populated areas, making civilian casualties certain.”

In other words, Bowen is claiming that ‘proportionate’ means not killing civilians and that the use of “heavy weapons in densely populated areas” means automatic transgression of “the laws of war” because there are resulting civilian casualties.

In fact, proportionality has a different meaning altogether.

“Even when there is a chance that citizens will be injured as a result of military action, there is no absolute prohibition against taking such action, as long as the target being attacked is a legitimate military target. The prohibition against such an attack applies only when the collateral damage to civilians is likely to be excessive in relation to the anticipated direct military advantage of destroying the military objective.”

And, as explained here:

“In everyday usage, the word “proportional” implies numerical comparability, and that seems to be what most of Israel’s critics have in mind: the ethics of war, they suggest, requires something like a tit-for-tat response. So if the number of losses suffered by Hezbollah or Hamas greatly exceeds the number of casualties among the Israel Defense Forces (IDF), then Israel is morally and perhaps legally culpable for the “disproportionate” casualties.

But these critics seemed largely unaware that “proportionality” has a technical meaning connected to the ethics of war. The long tradition of just war theory distinguishes between the principles governing the justice of going to war (jus ad bellum) and those governing just conduct in warfare (jus in bello). There are two main jus in bello criteria. The criterion of discrimination prohibits direct and intentional attacks on noncombatants, although neither international law nor the just war tradition that has morally informed it requires that a legitimate military target must be spared from attack simply because its destruction may unintentionally injure or kill noncombatants or damage civilian property and infrastructure. International law and just war theory only insist that the anticipated collateral damage — the “merely foreseen” secondary effects — must be “proportionate” to the military advantage sought in attacking the legitimate military target. This sense of proportionality is the second jus in bello criterion; it has to do almost entirely with the foreseen but unintended harm done to noncombatants and to noncombatant infrastructure.”

Recently the BBC’s defence correspondent Jonathan Beale produced two reports concerning the use of “heavy weapons in densely populated areas” in another part of the world and the potential resulting civilian casualties. 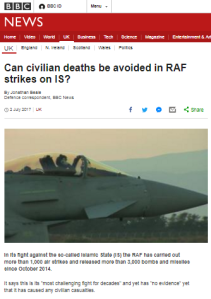 Can civilian deaths be avoided in RAF strikes on IS? July 2nd 2017

Particularly noteworthy is the fact that – in contrast to his colleague – Beale did not attempt to provide his viewers and readers with amateur interpretations of “the laws of war” in either those two reports or in a similar one he produced last September titled “Have RAF air strikes against IS killed no civilians?“.

In all three of those reports Beale did clarify to BBC audiences that civilian casualties are most likely unavoidable.

“But ultimately, as one pilot told me, however hard you try to avoid civilian casualties “you still can’t see through walls and rubble”.

Major General James Poss, a former Director of Intelligence in the US Air Force, says there is always doubt: “In the fog of war you can never know everything.””

“The US-led coalition is trying to dislodge the extremists from their strongholds of Raqqa and Mosul – cities with tightly packed streets where they are hiding among the local population and using them as human shields. The risk of civilian casualties is extremely high.

I put it to Air Commodore Johnny Stringer, who is overseeing the UK’s contribution, that avoiding civilian casualties is simply not possible. He acknowledges that assessment might change over time. “We are human and not perfect,” he says, “but we are doing our damnedest” to get it right.”

“Even the RAF admits it is now more difficult to avoid civilian casualties with the fight against IS focused on Raqqa and the old city of Mosul: dense, tightly packed urban areas with large civilian populations.”

Speaking to RAF pilots, Beale also clarified the lengths to which members of the British armed forces go to try to avoid unintended harm to civilians.

“It’s fair to say the US-led coalition is trying hard to avoid civilian casualties. Unlike Russia, coalition warplanes only use precision-guided weapons – often directed by GPS or laser.

Like other coalition pilots they’ve also redirected bombs and missiles at the last minute. In every case when they are about to hit a “hot target” pilots look for an area nearby where they can “shift cold” to avoid civilians who might suddenly appear.”

“For its part, the RAF says it is going out of its way to address worries about mistakes which might result in civilian casualties. The BBC has been told that in the second half of 2016 – when the offensive on Mosul began – the RAF either turned down, or asked for more intelligence about, half the targets it was given. […]

I ask “Dave” whether he can guarantee there will be zero civilian casualties. Even infrared sensors can’t see through walls. After a brief pause he admits its [sic] not possible to give that assurance. But, he says, they are doing everything in their power, including watching an area for hours, to protect civilian life.”

“They [the RAF] are fighting a brutal enemy, who unlike them, has no worries about killing civilians.”

Of course Israel also goes to great lengths to avoid civilian casualties, similarly using video analysis and aborting missions when civilians suddenly appear on the scene and even providing advance warning by leaflet or phone.

It is therefore interesting to compare Jonathan Beale’s conversations with British pilots in those three reports to an interview by Orla Guerin with an Israeli pilot in 2014. 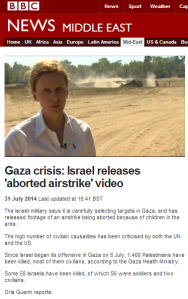 Guerin: “This is footage Israel is keen to share. An airstrike in Gaza being aborted because children are spotted. But the UN says most of those killed by Israel are innocent civilians.”

Guerin: “Captain Omri shows us in a simulator his bird’s-eye view of the terrain.”

Guerin: “This is a crowded area. People have nowhere to go. In many cases they have no transport, they have no means of escape. And you’re attacking hospitals [sic] where the wounded are being treated.”

Omri: “Well at the moment we’re doing everything possible to ensure the security and safety of both our civilians and as much as possible the Palestinian civilians. We have offered medical aid and we’ve offered a field hospital…”

Guerin [interrupts] “Well wouldn’t it be better if you stopped bombing the civilians rather than offering them medical aid later?” [emphasis added]

Omri: “Well Israel has always opted for a diplomatic solution.”

Guerin: “I mean some people might say, you know, how do you sleep at night?” [emphasis added]

Omri: “Well I sleep very well at night because I know that what we’re doing is saving lives the way I see it because whenever….”

Omri: “No, no. I know how many attacks I have already called off and I’m talking about numerous attacks so I know as a fact that I’ve saved dozens of lives.”

The contrasts between those conversations with British pilots engaged in military action in which no British civilians are at risk and an Israeli pilot during a war in which Israeli civilians were under constant attack are of course blatantly obvious – as are the double standards in BBC reporting on the subject of unintended civilian casualties during warfare.