The BBC’s track record on reporting anti-Israel bigotry in international sport is not particularly laudable. While some incidents are simply ignored, others get coverage that is often tepid and euphemistic.

That approach was again evident on November 27th in two BBC reports concerning an Iranian wrestler who was instructed by his coaches to lose a match so as to avoid meeting an Israeli in the next round of a championship. 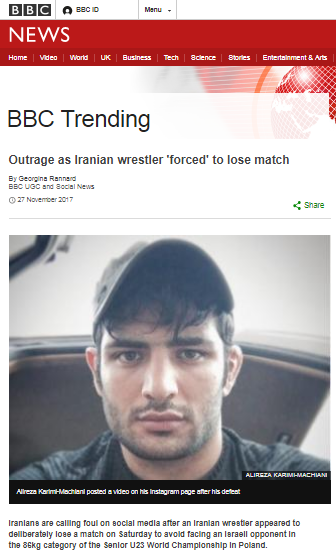 The BBC World Service radio programme ‘Newshour‘ – presented by Tim Franks – included an item (from 18:51 here) on that story introduced as follows: [emphasis in italics in the original]

Franks: “We’re often told that sport and politics don’t mix – or at least shouldn’t mix. But at the under-23 world championship of wrestling currently being held in Poland, there is intense speculation that sport and politics did collide and sport lost. Some Iranian wrestling fans on social media are claiming that their man deliberately lost a match on Saturday in order to avoid facing an Israeli opponent in the next round. Houchang Chehabi is an Iranian-born professor of international relations at Boston University. What’s the evidence that the bout was thrown?”

Interviewer and interviewee then discussed a video showing the coach instructing the wrestler to lose the match.

Chehabi: “The evidence seems to be that he was told to do so.”

Franks: “Right. And…ehm…he was told to do so – what – midway through the bout.”

Chehabi: “Yes, apparently. That’s what the video seems to show.”

Despite the Iranian government and the Iranian wrestling federation having praised the wrestler’s “noble and heroic action”, Franks was apparently still not convinced.

Franks: “How plausible do you think it is that a coach would issue instructions like that because of fear of having to meet face-to-face, arm-to-arm, leg-to-leg an Israeli in the next round?

Chehabi: “Yes, well, that’s nothing new. Traditionally Iranian wrestlers simply did not show up when they had to fight an Israeli because the idea was that doing so would lend legitimacy to the Israeli state which the Islamic republic does not accept. So…ahm…under some circumstances obviously the Israeli athlete would be declared the winner and I can only guess that somebody decided that losing a real bout against a Russian was preferable to being declared the loser in a non-bout against an Israeli.”

After a conversation about the popularity of wrestling in Iran, listeners heard the claim that Iranians have been “deprived of medals”.

Franks: “…I just wonder also now how much this might become a ‘thing’ in Iran: that a practitioner of a popular sport has been told – or appears to have been told – to lose in order not to run afoul of the authorities.

Chehabi: “Ahm…as I said this is really nothing new. Many Iranian athletes over the last 30 years have been deprived of medals because they refused to fight an Israeli. So whether they do it by not showing up or by losing the preliminary round, really at the end of the day it doesn’t make much of a difference.”

Franks: “But do you think wrestling fans…I mean clearly some are upset about it but do you think the majority would be thinking well, you know, it’s just one of those things?”

Chehabi: “Yeah, exactly. I would…I would go with that.”

Franks then appeared to bring up an ‘interesting’ way of avoiding such situations which – notably – did not involve the Iranians giving up their bigoted approach.

Franks: “And in terms of the Iranian sort of…trying to avoid this sort of thing in the future, have they ever tried to make appeals to the people who run world sport to avoid embarrassing clashes or do they realise that that is simply a power that they cannot wield?”

Chehabi: “Oh I’m sure that’s a power that they cannot wield. I mean some measures were taken by Arab countries: Israel a few decades ago was expelled from the Asian Games for instance. Until the 1970s Israel took part in the Asian Games and then Arab countries made sure that they could no longer do. But in the case of world championship, there’s no way one can exclude one country.”

Remarkably, the only explanation listeners to this item received regarding the political background relevant to this story was the tepid and euphemistic observation that “the Islamic Republic does not accept” Israel. Iran’s regular violent threats against Israel and its funding of terror groups dedicated to bringing about the country’s demise did not even get a mention in Franks’ portrayal of this story.

Also on November 27th the BBC News website published an article titled “Outrage as Iranian wrestler ‘forced’ to lose match” in the features section of its Middle East page. The same article – by BBC Trending – appeared on the ‘wrestling’ page of the BBC Sport website which, despite its usually displayed interest in reporting bigotry and discrimination in sport, did not produce any coverage of this story itself.

The political background provided to readers of that article was similarly sketchy:

“Iran does not recognise the state of Israel and forbids its athletes from competing against Israelis at international sports events.”

The article also included a link to a fifteen month-old report by BBC Sport which – as pointed out here at the time – inaccurately named the Israeli judoka Or Sasson as ‘Os’. The same uncorrected  inaccuracy appeared again in this latest article.

“Also in the Rio Games, Egyptian Islam El Shehaby was booed by the crowd after refusing to shake hands with Israeli opponent Os Sasson.”

It is of course highly unlikely (one hopes) that BBC coverage of any story about sportspeople repeatedly encountering discrimination, bigotry and state-ordered boycotts because of their skin colour, gender or sexual orientation would be quite as lukewarm as is the corporation’s repeated portrayal of those concerning Israelis.