Listeners to BBC Radio 4 and BBC World Service radio recently heard four different radio reports on the same topic.  The maker of those reports, Linda Pressly, described one of them as “a different window on the region” – but is that actually the case?

In fact, all four of those reports repeated politicised themes frequently seen in BBC content. 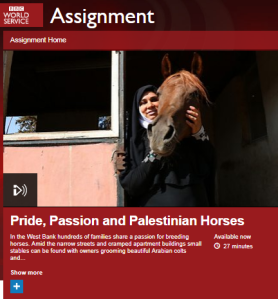 One of those themes is promotion of the umbrella term ‘occupied West Bank’ without any distinction being made between the places under complete Palestinian Authority control (Area A), those where the PA administers civilian life and Israel is responsible for security (Area B) and those under Israeli administration (Area C) – as laid out in the Oslo Accords agreement signed by Israel and the Palestinians.

The first of Pressly’s reports about Arabian horses was aired on November 25th in the BBC Radio 4 programme ‘From Our Own Correspondent”. Presenter Kate Adie told listeners (from 12:22 here) that:

“In the occupied West Bank though, among ordinary Palestinians, there’s been a resurgence of interest in these horses.”

In that report, Pressly visited two locations: Al Bireh – in Area A and under complete PA control since 1994 – and Anata in Area B.

The second report was broadcast on November 30th in an edition of the BBC World Service radio programme ‘Newshour’. Presented James Menendez’s introduction (from 18:00 here) included both use of the term ‘occupied West Bank’ and another increasingly seen theme: portrayal of Israeli Arabs as “Palestinian Israelis”.

In that report Pressly visited Silwan in Jerusalem which she described as follows:

“The area known as Silwan by Palestinians and as the City of David by Jewish Israelis tumbles down the hillside in East Jerusalem. It’s one of the most heavily contested parts of this city…”

Pressly also visited a riding centre in Jericho – located in Area A and also under complete PA control since 1994. Despite that fact, listeners heard a young show-jumper say that:

“My goal is to represent Palestine and tell people that we’re there, we can do things while we are occupied, that we don’t give up.”

Also on November 30th, listeners to BBC Radio 4’s ‘Crossing Continents’ heard a much longer version of the same report – titled ‘Pride, Passion and Palestinian Horses’ – in which Pressly’s “journey in the occupied West Bank”, as she termed it, included visits to Al Bireh (Area A), “East Jerusalem”, Anata (Area B), Turmus Ayya (Area B) and Hebron (Area A).

“In the West Bank hundreds of families share a passion for breeding horses. Amid the narrow streets and cramped apartment buildings small stables can be found with owners grooming beautiful Arabian colts and fillies. These new breeders are now making their mark at Israeli horse shows where competition to produce the best in breed is intense. As Palestinian and Israeli owners mingle on the show ground, political differences are put to one side as they share a passion for the Arabian horse.
For Crossing Continents, Linda Pressly follows one Palestinian owner and his colt as they navigate their way through Israeli checkpoints to the next big event in the Israeli Kibbutz of Alonim. Winning best in show is the plan but will they even get there?”

As can be seen from that synopsis, another theme promoted in this report and in the very similar one broadcast on the BBC World Service radio programme ‘Assignment‘ on November 30th and December 3rd was that of “Israeli checkpoints”.

Early on in the report (06:53), Pressley told listeners that in what she calls the West Bank, “the geography’s complicated; carved up as it is between the Palestinian Authority and Israeli control and punctuated by Israeli military checkpoints”.

During her visit to Anata, listeners heard her local fixer say that since the second Intifada “the Israelis are not allowed to come into Palestinian areas” but no explanation was given.

At 12:04 listeners heard Pressly’s sketchy portrayal of the paperwork needed for the horse breeder from Turmus Ayya – Ashraf Rabi – to show his horses in Kibbutz Alonim in the Galilee district.

Pressly: “To go to Alonim in Israel from the West Bank through one of the military checkpoints his horses need certificates issued by the Israel Arabian Horse Society. And Israel is closed to Palestinians from the West bank with no travel or work permit.”

Rabi: “As I’m a Palestinian so sometimes they don’t give me permit to go. Sometimes my horse doesn’t pass because the soldier who’s on the checkpoint he will return the horse back. […]

Whether or not those “certificates” needed by the horses include medical/vaccination paperwork was not made clear and so listeners were left with the inaccurate impression that passage through crossings between PA controlled areas and Israel depends on the caprice of those staffing them.

Pressly later introduced another element into the checkpoints theme:

Pressly: “Ashraf Rabi’s anxiety about Israeli checkpoints is shared by the Palestinian horse owning community and it’s compounded by the absence of specialised veterinary facilities and equine vets on the West bank, especially if there’s a medical emergency.”

She then visited a person in Hebron identified only by his first name – ‘Rashad’ – and listeners heard a story concerning his horse, Burak.

Pressly: “At the age of four Burak developed colic. He needed an operation. The only option was to get him to a hospital in Israel.”

Pressly: “It was too late. Burak died as he arrived at the hospital.”

The possibility that it was not the horse’s paperwork – but rather than of the person accompanying it – that was problematic was not raised. Pressly continued:

Pressly: “Israel’s restriction on free movement is a source of huge antipathy among West Bankers – not just horse owners. For Israel, insecurity and the recent wave of killings of Israeli soldiers and civilians by Palestinians in attacks at checkpoints justify the constraints. In 2015 the National Arabian Horse Show in Alonim was cancelled at the height of what’s been called the stabbing intifada. As far as we know, Burak’s the only horse to die after being held at a checkpoint.”

Remarkably, that highlighted sentence was Pressly’s sole attempt to explain to listeners why security measures are necessary at crossings and checkpoints – and it even misled listeners by claiming that Palestinian attacks during the past two years took place “at checkpoints” and implying that security measures commenced relatively recently. Listeners heard nothing whatsoever about the Palestinian violence during the second Intifada that actually made such security measures necessary and the word ‘terror’ was – predictably – completely absent from all of her reports.

In all four of her reports Pressly told BBC audiences that “love for Arabian horses trumps the divided politics of this troubled region”. More is the pity then that Pressly deviated from reporting on those animals and the people who raise them and ventured into just such politics by promoting well-worn, context-free, politicised themes seen all too often in BBC content.