On December 7th the BBC News website published an article by Barbara Plett Usher on its ‘US & Canada’ page and the same article appeared on the website’s Middle East page as ‘related reading’. 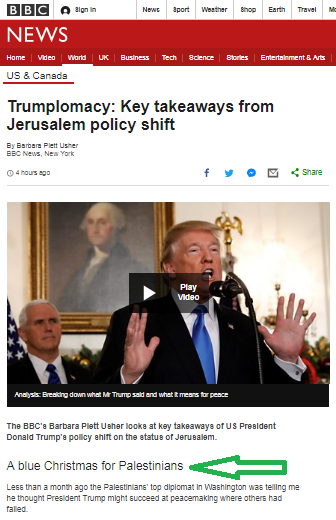 Titled “Trumplomacy: Key takeaways from Jerusalem policy shift“, the article begins with a subheading informing readers that the US president has ruined Christmas for Palestinians:

“A blue Christmas for Palestinians”

Readers then discover that the first “key takeaway” proffered by Plett Usher is that the PLO has cancelled a party.

“Less than a month ago the Palestinians’ top diplomat in Washington was telling me he thought President Trump might succeed at peacemaking where others had failed.

In every meeting Trump confirmed he would “give his heart and soul” to this process, said Husam Zomlot, the Palestine Liberation Organisation’s (PLO) representative.

It was an optimistic reading of a frequently rocky process. But there was enough in the efforts of Mr Trump’s peace envoys to give the Palestinians a sense that their relationship with the White House was on an upward trajectory.

Building off the momentum, Mr Zomlot organised a Christmas party on Capitol Hill with a guest list that included members of congress and government officials.

The idea was to live-stream Bethlehem Christmas celebrations into the political heart of America.

When the PLO mission got a late-breaking heads up about the decision on Jerusalem it cancelled the event, saying it would be unsuitable after an “announcement that runs counter to the message of peace”.”

Interestingly, the topic of recent PLO threats to freeze ties with the US – made weeks before the latest story concerning the relocation of the US embassy to Jerusalem broke – apparently did not come up during Plett Usher’s chats with Husam Zomlot.

Erasing the fact that the US president had spoken to Mahmoud Abbas and other Arab leaders on the phone prior to his announcement concerning the US embassy and recognition of Jerusalem as Israel’s capital, Plett Usher continued:

“The fact that the Palestinians, and reportedly Arab leaders, were largely taken by surprise is only one sign that the decision was not part of a wider Middle East strategy.”

“There’s been speculation that Mr Trump was trying to shake things up as a tactic to prepare the ground for peace talks.

But there’s far more evidence he was simply focused on keeping a campaign promise to pro-Israel American Jews and evangelical Christians in his political base.”

“The face of Mike Pence beaming over Mr Trump’s shoulder during the announcement said it all.

The vice-president was an influential voice in convincing Mr Trump to follow through on his campaign promise, and this illustrates the political power of hardline Christian evangelicals who fervently support Israel.

That was not lost on Palestinian legislator and Christian Hanan Ashrawi.

“My god did not tell me what his god tells him,” she spat out in an interview with the BBC.

“We are the original Christians, we are the owners of the land, we are the people who’ve been here for centuries. How dare they come here and give me biblical treatises and absolutist positions!”

Incidentally, the enterprising Mr Zomlot tried to play the Christian card with his Bethlehem-themed Capitol Hill reception, and has told activists the motto “Jesus is a gift from Palestine” might help translate the Palestinian message to Christian America.”

Palestinian officials of course have a long record of falsifying history in order to negate Jewish connections to the region and the ‘Jesus was a Palestinian’ canard is just one of the themes used to promote that narrative, particularly at this time of year.

Does the BBC really believe that amplifying the blatant falsehoods of professional PLO propagandists such as Ashrawi and Zomlot contributes anything of value to its audiences’ understanding of this story?