BBC Two's 'Alternativity' is an exercise in the promotion of a partisan narrative.

As we saw in part one of this post, much of the first half of the BBC Two commissioned ‘documentary’ titled ‘Alternativity’ which was aired on December 17th presented audiences with an overwhelmingly one-sided portrayal of Israel’s anti-terrorist fence.

The only explanation of why the structure had to be constructed came nearly a quarter of the way into the programme in the grand total of twenty-seven words from Danny Boyle. Viewers saw no images of any of the dozens of suicide bombings which brought about public demand for that counter-terrorism measure and did not hear from even one Israeli whose life was affected by Palestinian terrorism.

That first part of the programme also focused on the Bethlehem area, although interestingly – given the film’s declared subject matter – the problems facing Christians in that city and the sharp decline in their numbers since the PA took control of Bethlehem were not among the topics addressed. At 22:07 narrator Olivia Colman set the scene as Danny Boyle was taken to another location.

Colman: “Bethlehem has the largest Christian population in the occupied Palestinian territories. But the nativity isn’t just a Christian story and Danny’s nativity needs to be relevant to all so he’s visiting the mainly Muslim city of Hebron. Peace talks in the mid ’90s carved the West Bank up into areas A, B and C under Palestinian, combined and Israeli control respectively. But Hebron is especially contested with Jewish settlers occupying specific streets and sometimes specific houses. Here, the heavily defended settlers come and go as they please. But Danny’s guides – Fadi, a Christian and Saeed, a Muslim – are both Palestinians. And neither of them are allowed into the parts of Hebron claimed by the settlers.”

Obviously no viewer lacking background knowledge on Hebron (i.e. the majority) would understand from that ‘explanation’ that the agreement concerning that city signed by Israel and the Palestinians almost twenty-one years ago divided it into two parts: H1 – under Palestinian control – and the smaller H2 – under Israeli control. Not only does this programme fail to explain that the presence of Jews in Hebron is the result of that agreement, but the history of Jews in Hebron – including the fateful 1929 pogrom by Arabs – is completely erased.

At 23:15 viewers see Boyle on a street in H2 on what we later learn is Shabbat – Saturday.

Having later come across a family out walking, Boyle – clearly no firearms expert – tells viewers:

Boyle: “So that’s extraordinary to see a man out walking peacefully on the Sabbath with his wife and his child in a buggy and he’s got a AK47 [sic] or whatever the machine gun [sic] is…it’s a machine gun [sic]. So his statement that he’s making about what he expects to find, to protect his family – which is a natural instinct – is terrifying really.”

Boyle does not however bother to give viewers any idea of the scale of terror attacks in that area either in the past or in recent months. Standing on Emek Hevron street, Boyle then (22:40) presents pure conjecture as ‘fact’.

Boyle: “And the Star of David on the doorways which is declaring that obviously the…that in these circumstances, declaring that this is…this will become a settlement home…is shockingly reminiscent of something we all…one of the worst horrors of the world. That’s a bit mind-boggling.” 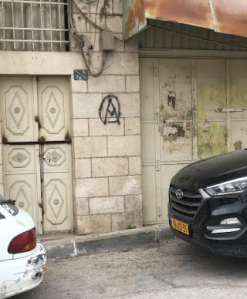 BBC Watch contacted a resident of that area and was informed that the Stars of David painted on those buildings are actually graffiti painted by unknown parties. Additional examples of graffiti on the same street can be seen in the photographs here on the right.

The doorways mentioned by Boyle are in fact entrances to small Arab market shops that were closed during the second Intifada due to Palestinian violence. Not only are those shops unsuitable for conversion into “a settlement home” – they have never even been considered for that purpose.

As we see, therefore, Danny Boyle – who earlier on in the programme admitted that the nearest he had previously ever been to the region was Majorca – has (presumably with a bit of help from his ‘guides’) let his imagination run wild – and presented his own uninformed assumptions as fact.

Moreover, he appears to be making an oblique reference to Nazi confiscation of Jewish property – an analogy that would be considered antisemitic according to the IHRA working definition adopted by the British government.

Again failing to provide crucial context, the narrator subsequently tells viewers that: “Not all of Hebron has been settled”.

Later on in the film viewers see footage of preparations for the Balfour Declaration centenary ‘street party’ at the Walled Off hotel that was generously covered by the BBC at the time. That segment includes the following statement from the hotel manager:

Salsaa: “This [the Balfour Declaration] is the origin of the modern conflict in the Middle East. Millions became refugees, thousands died and hundreds of thousands suffered because of this.”

At 33:11 the narrator tells viewers that:

That claim is of course inaccurate and misleading: there are no restrictions whatsoever on the roads leading to the vast majority of communities in Judea and Samaria. She goes on:

Colman: “There are virtually no Jewish people in Bethlehem and Israeli citizens are warned that entering any part of the city is dangerous.”

Boyle then further displays the level of his ‘regional expertise’, telling BBC Two viewers (33:31) that Israelis and Palestinians are “the same nation”.

Boyle: “It’s very difficult, clearly. Certainly I think that one of Banksy’s purposes is to try and illuminate that actually, although this is the same nation, the chances to interact are reduced so enormously by this wall and everything that comes with this wall. So that kind of division means that it’s very, very difficult to get Israelis to come and visit openly and certainly obviously to speak on camera about it. So that’s a big, big problem that we have.”

Needless to say, that problem was not overcome: viewers of this hour-long programme did not hear even one Israeli view.

In a segment of the film about the children participating in the nativity play (in which it is implied that parents might not want their children to take part because of the ‘risk’ of them being shot by the IDF), viewers see a seven year-old child presented only as Sofia and are told that “her father got arrested two days ago”. The narrator then informs BBC audiences (43:07) that all of Israel is “occupied” land and reinforces the previously promoted inaccurate notion that ‘millions’ of Palestinians became refugees in 1948.

Colman: “Over a million Palestinians live in camps which they were settled in when their lands were occupied after 1948. It’s been alleged that Sofia’s father leads the Popular Front for the Liberation of Palestine in the Dheisheh camp where her family lives.”

Viewers are not informed that the PFLP is a terrorist organisation and although Sofia’s mother is seen giving her tearful account of her husband’s arrest and the story is promoted again later in the film, the mother is not named and so the story remains unverifiable.

It is blatantly obvious that the aim of this BBC commissioned film was not – as BBC Two’s controller claimed in the PR – to present “a challenging and provocative exploration” of the nativity story. Rather, the seasonally relevant topic of Christmas was merely a hook upon which to hang an hour of serially inaccurate and politically biased amplification of an anti-Israel narrative, made all the more attractive to British audiences by the inclusion of ‘national treasure’ names such as Banksy, Olivia Colman and Danny Boyle.

The methodology behind this film can in fact be summed up by one of its scenes (from 34:15) in which an unnamed woman with a British accent who is helping organise Banksy’s Balfour Declaration ‘street party’ agitprop tells the camera that:

And indeed a big, brash star-studded stunt is exactly what the BBC’s funding public paid for in this BBC collaboration with the agitprop of an anonymous political activist. What they did not get, however, was anything resembling an accurate and impartial programme that would contribute to their understanding of the complex topics that are the components of this story – including that of the issues facing Christians living under Palestinian Authority rule.

Political narrative and inaccuracy in BBC Two’s ‘Alternativity’ – part one

A BBC Two commission and the politicisation of Christmas