The BBC's Yolande Knell reported that the Kerem Shalom crossing had opened - but avoided telling WS listeners why it had to be closed.

As regular readers will be aware, the BBC failed to adequately report on three separate incidents of severe vandalism at the Kerem Shalom crossing carried out by Palestinian rioters – on the instruction of Hamas – on May 4th, May 11th and May 14th.

The sole reference to the May 4th incident came in the form of twenty-two words in a BBC News website report on another topic that was published the following day:

The May 11th incident was completely ignored and, despite the corporation’s extensive coverage of the events of May 14th, the fact that Palestinian rioters once again set fire to the sole commercial crossing between Israel and the Gaza Strip was not reported to BBC audiences.

The day after the second incident on May 11th it was announced that the crossing would have to be closed while repairs were underway.

“The Israeli military on Saturday announced the closure of the Kerem Shalom border crossing into the Gaza Strip, a day after Palestinian rioters trashed key infrastructure serving the only entry point of outside goods into the Hamas-run Strip, causing immense damage.

The crossing will be closed while the damage is repaired, and will reopen in accordance with the security situation, officials said. […]

Apart from humanitarian cases, the IDF said the Kerem Shalom crossing would remain closed until the “extensive damage” caused to the torched gas lines, electricity infrastructure and a conveyor belt used to transfer goods into the Strip is repaired.

The army estimated the damage to Kerem Shalom would cost $9 million to repair.”

On the evening of May 14thit was announced that the crossing would reopen at limited capacity.

“Israel announced on Monday night that it would be reopening the Kerem Shalom Crossing into Gaza on Tuesday, after Palestinian rioters set fire to parts of the facility on three separate occasions during border protests this month — including on Monday. […]

Israel closed the crossing on Saturday night in order to assess and repair the damage caused by rioters the day before. […]

While the crossing was scheduled to reopen on Tuesday, it will only be able to function at a partial capacity in light of significant damage caused to the facility, including to the fuel lines — the only way to bring diesel and gasoline into Gaza in significant quantities.”

On May 15th the crossing did indeed reopen but, as the Times of Israel reported:

“Palestinian officials on Tuesday refused to allow trucks loaded with goods into the Gaza Strip through the Kerem Shalom Crossing, which Israel had reopened in the morning after rioters from the coastal enclave set fire to parts of the facility three times over the past month.

Now let’s take a look at how the BBC Jerusalem bureau’s Yolande Knell presented that story in a report aired on BBC World Service radio’s “Global News Podcast” at 13:00 GMT (15:00 local time) on May 15th. 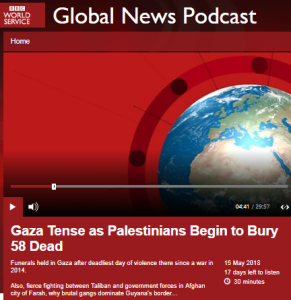 04:41 Knell: “We have had the Hamas leader Ismail Haniyeh…he left Gaza and went to Egypt where he’s been meeting members of the Egyptian intelligence. A lot of speculation that there is a lot of diplomatic pressure – international pressure – being applied to try to calm things down. Even though Israel had said that it was going to close the Kerem Shalom commercial crossing – the one commercial crossing between Israel and Gaza – indefinitely, it has now opened that crossing. There have been some supplies going in. And the Rafah border crossing with Egypt has also been opened and we’re told it will stay open for an extended period beyond what was initially imagined at the start of the Islamic holy month of Ramadan. So it could be that these kinds of moves as well, going on behind the scenes, give people in Gaza some kind of hope.” [emphasis in bold added, emphasis in italics in the original]

So what did Knell do there? First of all she steered audiences towards the belief that Kerem Shalom had been reopened on May 15th after “international pressure” rather than – as was actually the case – on the recommendation of the IDF and COGAT. Secondly, she failed to clarify to audiences that the reason for the prior announcement of indefinite closure of the crossing was the serious damage done to its infrastructure rather than some Israeli caprice. Third, she refrained from telling BBC World Service listeners that the extensive damage was deliberately caused by Palestinians themselves on three separate occasions within eleven days. And fourth, she completely avoided the topic of the refusal by Palestinian officials to allow some types of goods to enter the Gaza Strip on the day of her report.

That is apparently what passes for “accurate and impartial news [..] of the highest editorial standards” at the BBC.