The BBC's 'style guide' specifically states that the 1949 armistice line is not a border and not internationally recognised as such. A BBC World Service backgrounder aimed at young audiences states the exact opposite.

“Stephen Titherington, Sr Commissioning Editor of BBC World Service English, says: “BBC Minute has turned News on its head. Young people are information hungry, but only if it’s done in a way which matches their own energetic curiosity. With new BBC Minute Video, partners can now share vision as well as sound with their audience. We are delighted to have two new partners in Egypt and Jordan, bringing BBC Minute’s fresh sounding news coverage to more audiences in the region.”

Broadcast in the English language, BBC Minute bulletins are vibrant audio summaries of the news headlines and topical stories delivered in a high-energy style that entertains as much as it educates and informs. It is broadcast twice an hour, 24 hours a day, seven days a week by a team of young journalists in London. The team also produce BBC Minute On… which focus on a single subject or key story in more detail and is broadcast twice daily.”

Those ‘BBC Minute On’ backgrounders – billed as “making sense of the news” – are available online and hence potentially the subject of editorial complaints.

In early December 2017 one edition appeared under the title “BBC Minute: On Jerusalem“. Its synopsis states: 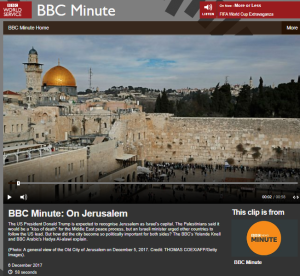 “The US President Donald Trump is expected to recognise Jerusalem as Israel’s capital. The Palestinians said it would be a “kiss of death” for the Middle East peace process, but an Israeli minister urged other countries to follow the US lead. But how did the city become so politically important for both sides? The BBC’s Yolande Knell and BBC Arabic’s Hadya Al-alawi explain.”

The ‘explanation’ given to the target audience of “young people” around the world is as follows: [emphasis in italics in the original]

Presenter: “This is BBC Minute on Jerusalem. The city’s holy to Jews, Christians and Muslims. But why is it politically significant for Israelis and Palestinians? Here’s the BBC’s Yolande Knell.”

Knell: “Not long after the modern state of Israel was created in 1948, the Israeli parliament was set up in the west of the city. But it wasn’t until the 1967 war with neighbouring Arab countries that Israel captured East Jerusalem and then later annexed it in a move that’s not recognised internationally.”

Presenter: “Now about a third of the people of Jerusalem are Palestinians. But what do Palestinians in general want? Here’s BBC Arabic’s Hadya Al-alawi.”

Al-alawi: “So Palestinian authorities have been negotiating a two-state solution which means returning to the 1967 internationally recognised borders. Also they want East Jerusalem to be their capital. However Palestinians on the ground might not agree. They want the whole of Jerusalem and also returning to the historical Palestine.”

As we see, the BBC’s audiences around the world – including in Middle Eastern countries – are not given any information concerning either the status of Jerusalem before 1948, the 19-year Jordanian occupation of parts of the city or the circumstances that caused Jordan to enter the Six Day War and loose its hold on that territory.

Worse still, BBC audiences are presented by Hadya Al-alawi with a partisan portrayal of the two-state solution which promotes and amplifies the PLO’s interpretation of it as meaning a Palestinian state on all of the territory occupied by Jordan and Egypt between 1948 and 1967.

Moreover, Al-alawi promotes the inaccurate notion that the 1949 armistice lines are “internationally recognised borders” when in fact the armistice agreement that created them specifically states that they are not borders – as does the BBC’s ‘style guide’.

“The Green Line marks the boundary between Israel and the West Bank. It is properly referred to as the 1949 Armistice Line – the ceasefire line of 1949. […]

In describing the situation on the ground, take care to use precise and accurate terminology. The Green Line is a dividing line or a boundary. If you call it a border you may inadvertently imply that it has internationally recognised status, which it does not currently have.”

Given Al-alawi’s subsequent use of the politically loaded term ‘historical Palestine’ and promotion of the notion of ‘return’ without clarifying to listeners that what that actually means is the destruction of Israel, it is hardly surprising that her portrayal of the 1949 ceasefire lines is likewise intended to promote a specific political narrative and agenda.

Nevertheless, one would obviously expect a BBC journalist participating in a project declared to be aimed at “making sense of the news” for young people around the world to stick to the BBC’s style guide as well as its supposed editorial standards of accuracy and impartiality.