Why does a PR firm claim to have 'worked' with BBC Radio 4 on an item about aid to Palestinians?

The September 23rd edition of the BBC Radio 4 “ethical and religious” programme ‘Sunday‘ included an item (from 19:23 here) described in its synopsis as follows:

“And where politics and morality clash – Edward discusses the cut in funding for Palestinian projects by the US Administration with Nigel Varnell [sic] of Embrace the Middle East and Sarah Elliott from Republicans Overseas.”

The charity representative is actually called Nigel Varndell.  Listeners were not provided with any information concerning the “particular viewpoint” of the charity ‘Embrace the Middle East’ as required under BBC editorial guidelines on impartiality.

Right at the beginning of the programme presenter Edward Stourton told listeners:

Stourton: “Charities are trying to plug the gap left by the Trump administration’s decision to withdraw funding for Palestinian refugees. We’ll debate the morality of that decision with one of the charities involved and a Trump supporter.”

The long item itself was introduced by Stourton as follows: [emphasis in italics in the original, emphasis in bold added]

Stourton: “A group of charities have declared they’re trying to plug the funding gap left by the Trump administration’s decision to withdraw American support for the UN agency that looks after Palestinian refugees. Nigel Varndell is head of marketing and fundraising for the charity ‘Embrace the Middle East’ and Sarah Elliott chairs the London-based group ‘Republicans Overseas’. Nigel Varndell told me how his charity is trying to help.”

After Varndell had told listeners about his own charity’s £25,000 contribution to a “Catholic health development” project run in “some of the poorest areas of Gaza” by the Vatican-run NGO ‘Caritas‘, Stourton asked:

Stourton: “What do you think the overall impact of the Trump administration’s policy is going to be?”

Varndell: “Well if you look at the overall impact, we’re talking about $200 million potentially of US aid cuts. Also cuts into UNRWA – the United Nations agency – that could be hundreds of millions of dollars. We’re already hearing of cuts to hospitals in East Jerusalem that deal with Palestinians and also money for co-existence projects. Now if you begin to look at the impact of that purely in somewhere like Gaza, that might mean something like 500 to 600 schools closing. That could be 22 health centres in Gaza that might be forced to close. That might be cuts to employment for people who work for UNRWA – maybe another 10 to 12 thousand jobs in an area that already suffers from huge unemployment. It’s going to be very significant.”

Stourton then asked his second contributor:

Stourton: “Sarah Elliott; given what we’ve just heard how do you possibly justify this policy?”

Sarah Elliott mentioned the possibility of other donors stepping up before going on to bring up a topic usually avoided by the BBC – Palestinian Authority funding for terrorists and their families.

After Stourton stated that “the vast majority – all this money – goes to legitimate aid projects, doesn’t it?”, Elliott brought up the topic of UNRWA textbooks, to which Stourton retorted “can you give me evidence for that?”. Elliot’s subsequent mention of weapons discovered in UNRWA schools produced no reaction from Stourton, who went on to ask Varndell for his input.

Stourton: “Well I want to hear from Nigel Varndell now. Well what is your response to the suggestion that this money doesn’t always go to legitimate purposes and is – I suppose contaminated seems to be the accusation – by the political nature of the region?”

Varndell told Radio 4 listeners “that money’s not going astray” and that “we’re talking about education for children, health care for sick people”.

Notably, neither he nor Stourton brought up the fact that aid provided to what Varndell termed “development organisations” frees up the Palestinian Authority’s budget for rewarding terror and Hamas’ budget for expansion of its terror capabilities such as cross border tunnels.

After Sarah Elliott had spoken about transparency and American priorities, Stourton brought up the topic of ‘morality’.

Stourton: “Do you think it’s moral to take money back from various projects that have been…people have got used to, providing them with health, education and so forth?”

He went on to interrupt Elliott’s answer to that question:

Stourton: “Can I…can I just…ahm…point out to you one area where people are suspicious about this, which is the fact that a lot of the money that’s being withdrawn is going to the refugee agency and there is a view that actually this is political; this is about trying to remove the issue of Palestinian refugees and their right of return from the political process.”

Listeners heard nothing on the relevant topic of unique automatic hereditary status for Palestinian refugees or that the so-called ‘right of return’ actually means eradication of the Jewish state and scuppers any chance of a two-state solution to the conflict.

They did however hear Nigel Varndell opining that “it’s deeply immoral to try and use the poorest and the most vulnerable people in Gaza as pawns in a political game” before he went on to make a problematic claim.

Varndell: “This is an area – one of the few areas in the world where under-5 child mortality is not going down in spite of the millennium development goals and everyone’s commitment to those.”

Listeners were not told that Varndell’s claim concerning child mortality rates is sourced from UNRWA itself or that since 2015 UNRWA has been making spurious claims of a connection between child mortality and Israeli counter-terrorism measures which do not stand up to scrutiny. He continued:

Varndell: “What we’re talking about is punishing those people and I was in Gaza in May. I was talking to children, women who have no access to healthcare other than that provided by aid agencies. And to try and say to them that they need to be political pawns in this is completely immoral and I would say wrong.”

Stourton: “And that is what you’re doing, Sarah Elliott, isn’t it?”

Rather than relating to the issue of why people who live under the rule of fellow Palestinians should be classified as refugees and why the Palestinian Authority and Hamas do not provide education and healthcare for those people, Stourton steered the focus back to the micro:

Stourton: “But the impact of what’s happening at the moment is indeed about people on the ground. […] Let me put this to you please: the people who Nigel Varndell has been talking about are the ones who are going to suffer as a result of this policy, aren’t they?”

Following Elliott’s response, Stourton gave the last word to Varndell who praised the “moral leadership” of British government departments in relation to a pledge of increased funding to UNRWA before closing with threatening speculation:

Varndell: “…it must be moral to keep funding these kind of aid development projects. We need to keep doing that or people like those I met in Gaza in May will lose their lives, their healthcare, their education and their hope. And arguably that will drive them into the hands of extremists and make this worse and more unstable for Israel, for Palestinians, for everyone.”

Given that the BBC’s coverage of the topic of the US decision to cut donations to UNRWA and other projects has been uniformly superficial, it would be easy to dismiss this item as more of the same.

Yet again BBC audiences were denied information concerning UNRWA’s problematic record and were given no insight into the background to its politically motivated perpetuation of the refugee issue. Yet again BBC audiences heard no discussion of why citizens of the Gaza Strip and PA controlled areas are classified as refugees and deliberately kept dependent on foreign aid.

However, in this item Radio 4 listeners heard more than an academic discussion. They heard a significant contribution from the “head of marketing and fundraising” at an NGO that is raising money for this particular cause – a cause that was repeatedly portrayed to the Sunday morning audience as the right “moral” choice.

Obviously it would therefore have been appropriate for Edward Stourton to have explained to BBC Radio 4 audiences listening to this item why a PR firm that describes ‘Embrace the Middle East’ as one of its clients claims to have been involved in the item’s production – and what that entailed. 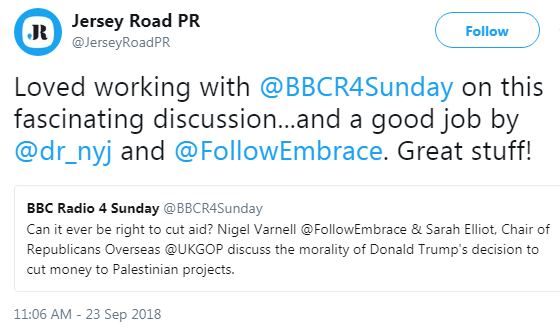