BBC R4's presentation of a story was primarily based on statements from unreliable sources.

Listeners to BBC Radio 4 on December 26th heard some interestingly sourced news bulletins concerning an alleged Israeli attack on sites in Syria late on the evening of December 25th. [emphasis in bold added, emphasis in italics in the original]

Among the headlines at the start of BBC Radio 4’s December 26th “Midnight News” programme was: 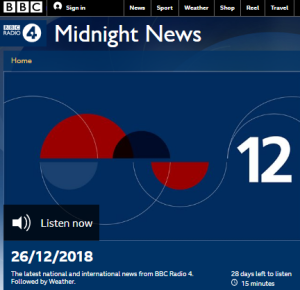 “Israel has attacked a weapons site in Syria and says it’s intercepted a Syrian missile heading towards its territory.”

There was however no confirmation at that stage of that highlighted claim.

Newsreader: “Syria says its air defences have intercepted missiles fired by Israeli aircraft close to the capital Damascus but it acknowledged that an arms dump had been hit. Youssef Taha has more details.”

Taha: “A Syrian military official said that most of the missiles were brought down before they reached their targets but he acknowledged that a weapons dump near Damascus was hit. Video footage shown on state media showed an object moving over the city being intercepted and then the sound of a loud explosion followed by a burst of artillery shelling. Israel confirmed the attack and said it later activated its air defence system to bring down a Syrian missile. Israel has on numerous occasions targeted Iranian and Hizballah sites in Syria that it regards as threats to its own security. An Israeli army spokesman said there were no injuries among Israeli troops and no damage.”

Contrary to the claim from Youssef Taha that “Israel confirmed the attack”, at that stage – a few minutes after midnight UK time on December 26th – Israel had not confirmed anything of the sort and in fact no official statement has been made to date. The only Israeli announcement at that stage concerned the activation of an aerial defence system “in response to an anti-aircraft missile launched from Syria“.

As we see Taha’s newsgathering was based entirely on unverified claims made by the Syrian military and Syrian state media – neither of which is renowned for its honesty and accuracy.

Despite the absence of official confirmation from Israel, later that morning listeners to a news bulletin broadcast on BBC Radio 4’s ‘Today’ programme were likewise told that (from 02:53 here):

Newsreader: “Israel has attacked an arms depot near Damascus. It said it had also intercepted a Syrian missile heading towards Israeli territory. From Jerusalem, Yolande Knell reports.”

The IDF statement did not actually include the word ‘intercepted’ in either Hebrew or English but Knell went on to repeat that claim.

Knell: “Syrian air defences shot down missiles fired by Israeli war planes from Lebanese air space according to the official Syrian news agency. But it says that an arms depot was damaged by an Israeli strike. The Israeli military declined to comment on the report but said that Israel’s aerial defence system had intercepted a rocket launched from Syria. Israel has previously carried out dozens of airstrikes in Syria against what it says are Iranian military targets and to prevent advanced weapons being handed to Hizballah, the Iranian backed Lebanese militant group.”

Once again BBC newsgathering consisted of repeating unconfirmed claims from state-run Syrian media and the same unreliable source was quoted in a news bulletin aired in the BBC Radio 4 programme ‘World at One’ (from 04:22 here) on the afternoon of the same day.

Knell: “Israeli war planes flying over southern Lebanon fired missiles at targets near Damascus according to the official Syrian state news agency. It says most were shot down but an arms depot was damaged. Israeli media say that 2 Iranian planes bound for Tehran left Damascus airport just before and at around the time of the airstrikes. Reports have previously linked their airlines to weapons transfers to the Lebanese militant group Hizballah. The Israeli military has only confirmed that its air defences intercepted a missile fired from neighbouring Syria after the time of the reported air raids. Israel has previously said it struck some 200 targets in Syria over the past 2 years, saying it acts to stop Iranian entrenchment and to prevent advanced weapons being handed to Hizballah.”

A news bulletin in the radio 4 programme ‘PM’ (from 03:19 here) on the afternoon of the same day promoted claims from a source which – like official Syrian media and the Syrian military – had been shown to have repeatedly lied about chemical weapons attacks in Syria in recent years.

Newsreader: “Russia says that 2 passenger planes were directly threatened last night by Israeli airstrikes on Syria. The defence ministry in Moscow said that the endangered flights had been landing in Damascus and Beirut. Israeli war planes damaged an arms depot near Damascus and wounded three soldiers. Israel hasn’t commented.”

On the evening of December 26th the same unverified claim was amplified in a news bulletin aired in the Radio 4 programme ‘The World Tonight’ (from 03:20 here).

Newsreader: “Russia says an Israeli missile strike on targets in Syria last night directly threatened 2 civilian planes. The Russian foreign ministry described the attack as a gross violation of Syrian sovereignty. In the past Israel has acknowledged carrying out 200 missile strikes in Syria over 2 years with the aim of stopping Iran entrenching itself in the country and preventing advanced weapons reaching the Lebanese militant group Hizballah. Here’s our Middle East correspondent Yolande Kell.”

Knell: “Israeli war planes flying in Lebanese air space targeted an arms storage site near Damascus according to the official Syrian news agency. Russia’s defence ministry says 14 of the 16 missiles they fired were shot down and that Israel’s actions threatened 2 passenger planes, one landing in Beirut and the other in the Syrian capital. Israel’s military hasn’t commented on the reports but said that its air defences had intercepted a missile fired from neighbouring Syria. Relations between Israel and Russia became strained in September when Syria shot down a Russian military plane during an Israeli airstrike, killing 15 people on board. Afterwards Russia announced that it had delivered its advanced S300 air defence system to Syria despite Israel and the US urging it not to.”

Late on the evening of December 26th the AP news agency published what it said was confirmation of the strikes in Syria – and a response to the Russian claims – from an anonymous “Israeli security official”.

However as we see, the BBC’s presentation of the story during the first 24 hours after it broke was primarily based on statements put out by official Syrian and Russian sources which the BBC repeated unquestioningly without independent verification.

Given that those sources have been shown in the past to repeatedly disseminate false claims, one would expect a serious media outlet to be considerably more cautious about promoting their unverified statements to its funding public in supposedly factual news bulletins.