BBC audiences hear of checkpoints, blockade and the 'separation barrier' - but not why they exist.

That item by Fiona Macdonald of BBC Culture in fact relates to very specific areas of “the Middle East” and showcases a book first published in 2015 by photographer Tanya Habjouqa. The ten-page feature includes images and videos of the photographer talking about her work. 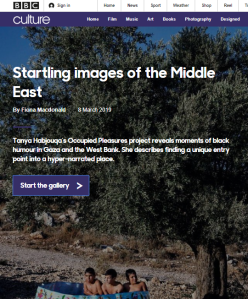 “Habjouqa started on the project Occupied Pleasures in 2009. Her images reveal the lives of Palestinians living in Gaza and the West Bank in a nuanced way, offering glimpses of everyday resilience.”

That ‘nuance’ however does not include any background information whatsoever and so the images and narrative are presented to BBC audiences in an entirely context-free manner.

On the second page audiences find a video in which Habjouqa states:

“…Palestine was home. And I was the one sitting at checkpoints and experiencing this Kafkaesque reality…”

In the video appearing on the fifth page Habjouqa tells the story behind some of her photographs concerning a story from 2013.

“There had been a wedding and I’d missed it. There was a woman who had come in, in a wedding dress and had the wedding party because she hadn’t been given permission to access Gaza because of the blockade. […] And then he paused and he said the most sobering sombre thing, he said ‘you know no matter what they do to us, we will always find a way to live, to love, to laugh.”

BBC audiences are not told that the Egyptian girl had been denied entry to the Gaza Strip by the Egyptian authorities or of the Palestinian terrorism that made the blockade necessary.

On page nine audiences find a video in which an image of “Furniture makers in the West Bank, with Israel’s separation barrier behind them” with no explanation of why the anti-terrorist fence had to be built.

The narrative advanced in this feature is glaringly obvious: Habjouqa states in the last video that her work relates to people who “refuse to let suffering be the definition of their existence”.

How that suffering is related to their leaders’ choices and how those choices brought about the “checkpoints”, “blockade” and “separation barrier” of course goes completely unexplained in this latest chapter in the BBC’s drip fed narrative of Palestinian victims completely devoid of agency and responsibility.