As documented in part one of this post, listeners to the BBC’s domestic station Radio 4 had been prepared in advance for what the corporation apparently believed was going to be a major news event on Saturday, March 30th with a ‘Today’ programme report from Gaza the previous day by the BBC Jerusalem bureau’s Tom Bateman.

Listeners to the BBC Radio 4 programme ‘PM’ on March 28th had also heard Bateman reporting from the Gaza Strip and that item (from 46:20 here) included the following:

Bateman: “And inside Gaza itself, a sense of anticipation about the coming protests that will take place on Saturday marking a year since these weekly protests have taken place at the perimeter fence.”

Thus BBC audiences once again got a dose of the corporation’s framing of the ‘Great Return March’ agitprop as “protests” rather than events organised, facilitated and executed by a coalition of terror organisations that have regularly included violent rioting, serious attacks and infiltrations into Israeli territory. 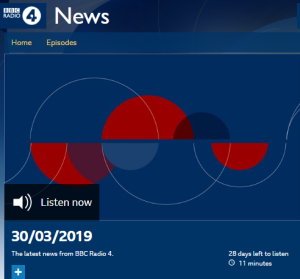 Sleat: “Thousands of Palestinian protesters have massed on the boundary between Gaza and Israel to mark a year since the start of weekly demonstrations there. Palestinians have been throwing stones and Israeli forces using tear gas to stop them approaching the border fence. Our correspondent Yolande Knell is there.”

Knell: “Across a wind-swept field here lies a wire fence and beyond it there’s a large crowd at one of the Gaza protest sites gathered around a Palestinian flag.  Israeli soldiers have been firing volleys of tear gas to drive demonstrators back. A military spokesman says Palestinians have been throwing stones and petrol bombs and there have been some attempts to breach the fence. Israel says it only opens fire to stop people crossing into its territory and protect its citizens. This is a serious test for the efforts of Egyptian negotiators who’ve been trying to broker calm between Israel and Hamas after an escalation in tensions earlier this week when Palestinian militants fired rockets at Israel and Israel’s air force struck dozens of sites in Gaza. Already this anniversary was due at a sensitive time: just over a week before an Israeli election and after recent economic unrest in Gaza which has put pressure on Hamas.”

In other words, even when the BBC knows that participants have been throwing petrol bombs and trying to infiltrate Israeli territory, it still portrays the events as “demonstrations” and those participants as “protesters”.

The same was the case when part of that report from the BBC Jerusalem bureau’s Yolande Knell was recycled in a later news bulletin aired during the ‘PM’ programme (from 02:18 here):

Newsreader: “Tens of thousands of Palestinians are demonstrating along the boundary fence between Gaza and Israel to mark the first anniversary of weekly protests there. Three people are reported to have been killed, one before the start of the mass rally. Over the past year nearly 200 Palestinians have been shot dead by Israeli troops while one Israeli soldier has died. Yolande Knell reports from southern Israel.”

Knell: “Israeli soldiers have been firing volleys of tear gas to drive demonstrators back. A military spokesman says Palestinians have been throwing stones and petrol bombs and there have been some attempts to breach the fence. Israel says it only opens fire to stop people crossing into its territory and protect its citizens. This is a serious test for the efforts of Egyptian negotiators who’ve been trying to broker calm between Israel and Hamas after an escalation in tensions earlier this week when Palestinian militants fired rockets at Israel and Israel’s air force struck dozens of sites in Gaza.”

Listeners to BBC Radio 4’s ‘Six O’Clock News’ on March 30th heard the newsreader give the following headline at the top of the programme. 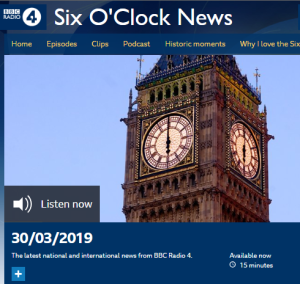 “Palestinian health officials say at least two demonstrators have died in clashes with Israeli forces on the anniversary of weekly protests on the Gaza border.”

The item itself (from 05:34 here) was presented as follows, with no mention of the fact that “health officials in Gaza” actually means the terror group Hamas.

“Tens of thousands of Palestinians have been taking part in protests along the boundary between the Gaza Strip and Israel. They’ve been throwing stones and petrol bombs and attempting to breach the perimeter fence. Israeli forces have used live ammunition and tear gas. Health officials in Gaza say three protesters have been killed. The demonstrations are marking the first anniversary of weekly protests at the border. From Gaza our Middle East correspondent Tom Bateman has sent this report.”

Bateman: “That’s live fire as the Israeli snipers are aiming towards a group of people that just got right up at the fence. Some appear to be trying to climb it. At the biggest protest site east of Gaza City, Palestinians turned up in their thousands. Most gathered near the smoothie vans and fruit sellers hundreds of meters from the fence. But others got close to it, burning tyres and throwing rocks and petrol bombs. From the other side Israeli troops responded with tear gas, rubber bullets and live ammunition. One of the demonstrators, Bahaa Abu Shamala, said Palestinians were highlighting their historical dispossession and calling for an end to the blockade which Israel says it imposes for security reasons.”

Abu Shamala: “We are here in Gaza. We are oppressed people. We want to feed our children. We want to get rid of this huge trauma that we suffered from the siege that Israel imposed against us for more than 12 years.”

Israel of course does not impose a ‘siege’ on the Gaza Strip at all but Bateman had nothing to say about his interviewee’s promotion of Hamas favoured terminology and made no effort to inform listeners of the years of Hamas terror which have made counter-terrorism measures including the blockade necessary.

Once again failing to inform listeners that some 80% of those killed at ‘Great Return March’ events in the past year have been shown to have links to terror groups, Bateman went on:

Bateman: “In the past year nearly 200 Palestinians have been shot dead by Israeli troops at the fence. An Israeli soldier was killed by a Palestinian sniper last summer. The Israeli army spokesman is Jonathan Conricus.”

Lt. Col. Conricus: “This has after all been a year of thousands of rioters trying to breach into Israel using different types of violence. We’ve had grenades, IEDs, Molotov cocktails. We’ve even had live fire.”

In other words, the only mention of the violent nature of the year-long events heard by Radio 4 listeners throughout eleven hours of broadcasting came from an Israeli official.

Bateman: “This week’s build-up to the first anniversary saw a significant military flare-up between Israel and Hamas which largely controls the protests in Gaza. Israel is 10 days away from a general election in which security is a major issue. There have been intensive efforts brokered by Egypt to prevent tensions at the boundary slipping out of control. It seems to have largely succeeded for now, despite today’s casualties.”

Although the BBC sent Tom Bateman to the Gaza Strip and Yolande Knell to southern Israel to cover the March 30th events, audiences once again did not hear a word from or about the residents of Israeli communities close to the border fence who have been severely affected by the ‘Great Return March’ violence throughout the past year. Neither were listeners informed that Hamas had ordered schools closed and a general strike on March 30th in order to boost participation in the event.

One year on, the BBC’s across the board and inflexible editorial approach to this story continues to promote the monochrome framing which – while flouting the corporation’s public purpose obligations – denies audiences vital context and information.