Which political party did the BBC refrain from categorising?

In all those reports BBC audiences were provided with brief descriptions of various competing parties’ locations on the political map. [emphasis added] 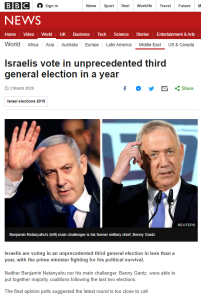 “In December, he [Netanyahu] comfortably won a primary election for leadership of his right-wing Likud party.

His main opponent in the general election is Benny Gantz, 60, a retired general who served as chief of staff of the Israel Defense Forces (IDF) before entering politics to lead the centrist Blue and White party.”

“If Blue and White wins, it will bring to an end more than 10 years of rule by Likud, which advocates a right-wing nationalist agenda.”

“With 90% of votes counted, his [Netanyahu’s] Likud party and its right-wing allies were on course to win 59 seats, Israeli media reported.”

“With about 90% of votes counted, Likud had 29.35%, compared to 26.34% for Mr Gantz’s centrist Blue and White alliance, the Central Elections Committee said.” 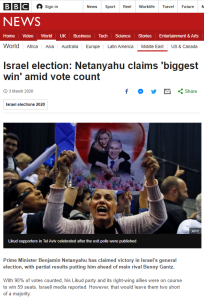 With 99% of votes counted, Mr Netanyahu’s Likud party was on track to win 36 seats, and allied right-wing and religious parties another 22.”

“Likud is encouraging defections from the rival centrist Blue and White alliance, which is set to win 33 seats.

The nationalist Yisrael Beitenu party could also tip the balance with its seven seats, although it has ruled out joining a Likud-led coalition that includes religious parties.”

“Nitzan Horowitz, leader of left-wing Meretz party, said there would be a clear majority for the law in the Knesset and that it was “the moral thing to do”.

But Defence Minister Naftali Bennett, head of the right-wing Yamina alliance, said it would be “extremely undemocratic and spit in the face of half the country”.”

There was however one notable exception made to that editorial practice of helping readers navigate the Israeli political map.

“A strong election result for the Joint List, an alliance of Arab parties, could favour Benny Gantz’s chances of forming a government propped up by their support.”

“Israel’s Arab Joint List had its best ever election and is the third largest group in parliament.”

As we see, in contrast to the other lists running in the election, the BBC did not make any effort to inform its audiences where the Joint Arab List lies on the political map or which four separate parties make up that “alliance”.

Evidently as far as the BBC is concerned, all its audiences need to know about the ideologies of parties included on Joint Arab List such the communist Arab-Jewish party Hadash, the Muslim religious party Ra’am and the anti-Zionist Balad is that they ‘represent’ the 16% of the Israeli electorate that the BBC inevitably chooses to portray as one monochrome group.

How will the BBC cover Israel’s election?

Contrary to The Times’ claim, Joint List is not “left-wing” (UK Media Watch)

0 replies on “BBC News signposts Israeli political lists – except one”