Reporting by BBC Jerusalem bureau staff on the topic of Coronavirus has so far focused mainly on Bethlehem (see ‘related articles’ below), apparently resulting in quarantine for one journalist. More recently the corporation chose to turn its attention to a location in which to date no cases of infection have been reported. 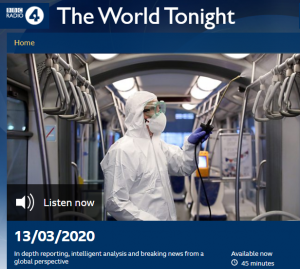 On March 13th listeners to BBC Radio 4’s ‘The World Tonight’ heard a report by Tom Bateman (from 23:34 here) which was introduced by presenter James Coomarasamy as follows:

Coomarasamy: “Well the World Health Organisation may have identified Europe as the current epicenter of the Coronavirus outbreak but it also has an eye on those countries and territories which have yet to be affected whose health services are far weaker than those of the developed Western world. Among them is the Gaza Strip where more than two million people live in tightly packed conditions and where the WHO believes that urgent global intervention would be necessary if cases of Covid19 are recorded. Here’s our Middle East correspondent Tom Bateman.” 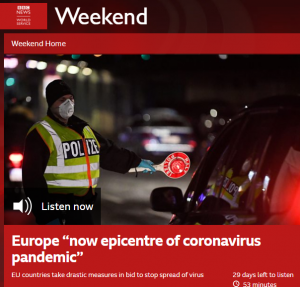 Ritson: “Let’s remind you of our top story: the World Health Organisation has warned that any spread of Coronavirus to the Gaza Strip would need urgent global intervention. There have been no confirmed cases there so far. The health system is already under significant pressure and more than two million people live in densely populated conditions. From Jerusalem, here’s our Middle East correspondent Tom Bateman.”

Listeners to both editions of the BBC World Service radio programme ‘Newshour’ on March 14th also heard the same report (from 14:06 here and from 19:03 here) which was introduced by Ben James thus:

James: “Now the World Health Organisation says the full extent of the Coronavirus outbreak will only become clear when places with weak, underdeveloped health services are tested. Among those is Gaza, where more than two million people live in tightly packed conditions. The BBC’s Tom Bateman begins this report in a local hospital.” 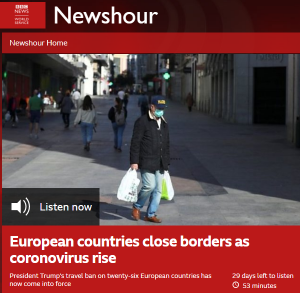 The WHO’s latest update on the situation in the Palestinian Authority controlled territories and the Hamas controlled Gaza Strip – dated March 13th – makes no mention of “urgent global intervention”. The source of that dramatic claim promoted in two of those introductions is apparently one of Bateman’s interviewees.

As regular readers know, BBC audiences are in general very badly placed as far as understanding the underlying status of medical care in the Gaza Strip is concerned because although they are told plenty about the dire state of medical services in the Gaza Strip, they rarely hear about the PA actions which exacerbate that situation such as the longstanding insufficient supply of medications.

Bateman began his report with an unrelated story.

Bateman: “Ten-year-old Mansour is having kidney dialysis in a packed children’s ward. His father can’t afford the cost of a transplant for him, which would mean travel to Egypt or Jordan. This is the story of Gaza’s hospitals: outdated, hard pressed and lacking many medicines and supplies. And now the health system must prepare for Coronavirus.”

As ever, Bateman did not bother to inform listeners why Gaza Strip hospitals lack medicine and equipment. Listeners then heard that:

“We have in Gaza barely between 50 to 60 ventilators. Serious cases would require at certain stage that they need to be on ventilators. And if we have hundreds, then you would imagine what we need to deal with these hundred cases.”

Bateman: “Dr Abdelnasr Sohob is from the World Health Organisation. There have been no confirmed cases of Coronavirus so far in Gaza but it’s on the borders and medics are warning of little capacity to cope with a sustained outbreak.”

Sohob: “Gaza with these facilities can deal with the first shock of 50 to 100 cases with the current resources. After that I think the international community has to step in to assist Gaza.”

Apparently that latter sentence is the source of those dramatic introductions.

Listeners then heard shouting before Bateman referred to a story which the BBC did not bother to report at the time. He went on to promote a much-used BBC narrative concerning population density and an entirely context-free reference to “Palestinians shot by Israeli soldiers”.

Bateman: “A protest last month near a newly-built hospital in the town of Khan Younis. Some locals burned tyres and waved banners after reports Coronavirus patients could be brought there. Anxiety is spreading. More than two million people live in one of the world’s most densely crowded places. The UN’s refugee agency for Palestinians says health workers have learned from the most recent medical crisis: the so-called March of Return protests that saw thousands of Palestinians shot by Israeli soldiers at the perimeter fence. After those emergencies, it says there are Coronavirus plans to triage patients at hospital entrances and clear public wards of non-essential cases.”

Bateman next interviewed a mother who recounted how she had cleaned the house and taught her children personal hygiene.

Bateman: “Lena Tahar is reading with one of her four children. Gaza’s schools have shut until at least the end of this month as a precaution. For her, like many Palestinians, even the hand-washing advice is hard with an unclean water supply and regular power cuts.”

Listeners were not told of the reasons for the clean water and power shortages in the Gaza Strip.

Bateman: “In Gaza City the disinfectant spray squads are out on the streets.”

Listeners heard the “head of protective health department in Gaza municipality” tell them that his team was:

“Spreading the material that kills the microbe, kills the virus. Inshallah this procedure cover all the problem and solve the problem.”

Bateman: “But it might take more than that. There’s already been disquiet at more sweeping measures – like the month-long emergency declared in the West Bank with more than 30 confirmed cases – weren’t adopted initially by Hamas in Gaza. It’s feared infection could thrive amid the Strip’s deep poverty and in the crowded refugee camps – problems that are compounded by the tangled politics here. Israel and Egypt’s crippling blockade – meant to stop weapons getting to Hamas militants – the recent bouts of fighting with Israel and the deep split between the two main Palestinian factions all add to the crisis.”

Bateman made no effort to clarify that the “recent bouts of fighting with Israel” were the result of attacks by the Palestinian Islamic Jihad (or how they “add to the crisis”), how exactly that “deep split” between Hamas and Fatah affects healthcare, water, sewage and electricity supplies in the Gaza Strip or why there are “refugee camps” in a territory which has been under Palestinian control for fifteen years.

Bateman: “But some residents like Ibrahim Abu Leila hope the isolation could help ward off the latest health threat.”

Abu Leila V/O: “More than 11 years of blockade by land, by sea, by sky. The people that arrive here are counted. They come one day or two days and they leave. We don’t have hotels that tourists stay at so we don’t meet them, thank God. Maybe some good can come from the bad.”

Of course hotels do exist in the Gaza Strip and while normal tourism is understandably virtually non-existent in a destination ruled by a terrorist organisation, journalists, conflict tourists, foreign delegations and UN staff certainly do visit.

Bateman: “Gaza has so far avoided any confirmed Coronavirus cases. People know its impact could stretch their health system to the limit.”

That same observation is of course true in many other places around the world but as we see, the BBC made the most of the Coronavirus story to widely re-promote many of its long-standing mantras concerning the Gaza Strip even though no cases have been reported there so far.

The limits of BBC News reporting from PA controlled territories