An organisation called Palestine Community Foundation was set up in the UK in 2018 by a British woman called Razan Shamallakh who appears to believe that Israel is “my own country” and brands Israelis as “white”.

“We are Palestine Community Foundation. A non-governmental organisation aimed at Palestinians and non-Palestinians alike; promoting Palestinian culture, advocating for justice and building a sense of community around Palestine in the UK.” [emphasis in the original]

A quick look around that organisation’s website gives an idea of its political agenda, from supporting the BDS campaign to selling a much criticised children’s book.  The organisation’s 2020 campaign is explained in a video. One of the people appearing in that video is named as Laila Hassan of the organisation Women in Hebron.

Earlier this month the PCF brought Laila Hassan Awada to the UK for a tour of universities. 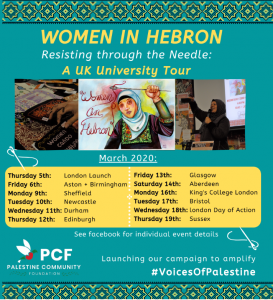 The PCF’s general manager Natasha Self also took Hassan to the BBC HQ on March 6th. 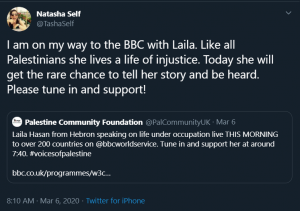 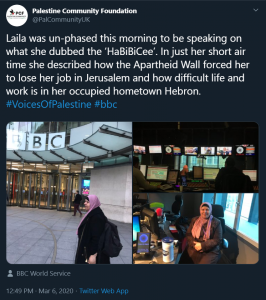 That interview was aired on one of that day’s editions of the BBC World Service radio programme ‘Newsday’, hosted by Ben James and Krupa Padhy, and it will be available online for “over a year”.

Padhy introduced the item (from 35:42 here) by referring to a story from January. [emphasis in italics in the original, emphasis in bold added]

Padhy: “Now when the US president Donald Trump announced a peace plan for the conflict between Israelis and Palestinians it was followed by days of riots and violence in the West Bank town of Hebron as protesters showed their opposition to the proposed plan. That might be when you’ve heard about Hebron most recently in the news.”

James: “Well we’ve got someone in the studio this morning who lives in Hebron. Let’s say hello to Laila Awada who’s here in the UK to talk about life there, also to promote her women’s collective which is empowering Palestinian women to earn their own money.”

After a conversation about the market stall run by the collective, listeners heard the following from Laila Hassan Awada:

Awada: “I join Women in Hebron in 2008 and I had to work in Jerusalem before but I lost my job by the wall when they…the Israelis they built the wall. And then we stuck in the West Bank and we cannot go any more in Jerusalem or what they call it Israel.”

Travel to Jerusalem is of course possible with a permit and thousands of Palestinians make the journey every day. Unsurprisingly, no effort was made to inform listeners that the anti-terrorist fence was constructed because Palestinian terrorists murdered over a thousand Israelis and injured hundreds of thousands more during the second Intifada.

Awada explained that the women do embroidery and that in addition:

Awada: “…we can talk about…the same time about the situation in Hebron and how we are strangled by the settlement and how many settlers we have living in the old city. We have around 800 settlers. I mean Zionist people because we never had any problem with you are Jewish or for religion. But we talk about the Zionists and this is what I want people to know what’s the difference between the Zionist and the Jewish people.”

Predictably listeners heard nothing about the ancient Jewish community in Hebron or the 1929 massacre which brought it to an end. No effort was made to challenge Awada’s absurd claim that “we never had any problem with the Jewish” even in light of that historic fact and audiences were not told what Zionist means, or of the fact that the vast majority of British Jews identify as Zionists.

Awada: “And our shop it’s under the Israeli settlement. It’s called Avraham Avinu and it’s an area called H2. It’s divided by Oslo Hebron protocol. It’s just has to be H1 under Palestinian control and H2 it’s under Israeli control.”

James: “OK so those are some of the different designations of the land as the result of that accord.”

No effort was made to clarify to audiences that the Palestinian representatives willingly signed the 1997 Hebron Protocol or that the vast majority of the city (around 80%) is under complete Palestinian control. Neither, of course, were listeners told that the Avraham Avinu synagogue in Hebron dates from 1540.

Later on Awada explained the purpose of her (and her colleagues’) frequent tours abroad.

Awada: “But really I want to give my message for other ladies, how the women under occupation they live and how the occupation affected our business and why I cannot do my business in my country, why I have to go to other countries.”

At the end of the item Padhy opined:

This is not the first time that a representative of Women in Hebron has appeared on BBC World Service radio and once again the question of who initiated the contact between that group and BBC producers must be asked. The fact that the BBC World Service chose to give a sympathetic platform to an activist brought on tour in the UK by a highly partisan political group, with literally no challenging questions asked and no factual background provided to place her politically motivated narrative in context, should be deeply worrying to the BBC’s funding public.