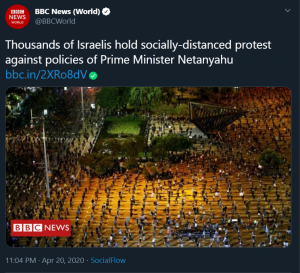 They condemned what they described as anti-democratic measures taken by the Israeli prime minister during the coronavirus pandemic.

Israel’s parliament has been tasked with forming a unity government after three inconclusive elections plunged the country into a political crisis.

On Monday, Mr Netanyahu and his political rival, Benny Gantz, signed an agreement to form an emergency unity government”

That, however, is not an accurate description of the agenda of the April 19th demonstration organised by the recently established ‘Black Flag Protest’. 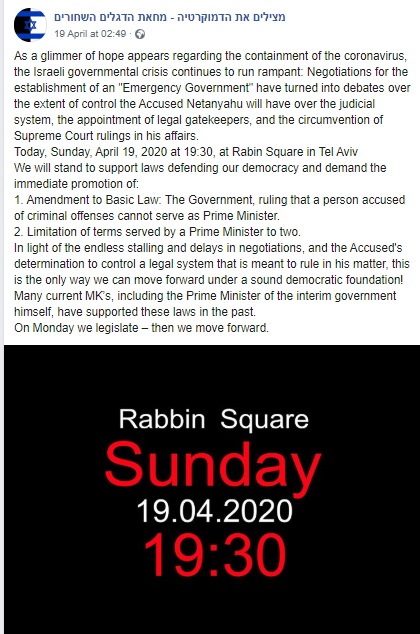 As the Israeli journalist Lahav Harkov pointed out to someone who similarly misunderstood the aim of the April 19th protest: 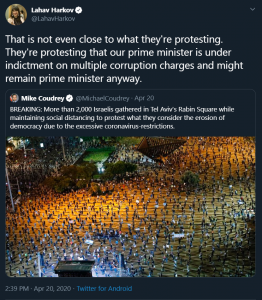 A Times of Israel report on a similar demonstration held a few days earlier quoted one of the organisers:

“The citizens of Israel are proving today that Israeli democracy refuses to be subjected to a coup under the pretext of the coronavirus,” an organizer said.

“We won’t back a government whose prime minister is accused of bribery, fraud and breach of trust. We cannot permit a situation in which that same accused man has a role in appointing investigators, prosecutors and judges in the State of Israel.”

In its coverage of the the April 19th demonstration, the ToI noted that:

“The “black flag” movement’s name has come from demonstrators pinning black flags to their vehicles and homes to symbolize what they believe is a danger to Israel’s democracy posed by Netanyahu’s continued rule.”

In other words, the BBC’s linkage of the protest to the Coronavirus pandemic and the implication that the demonstrators were protesting against “anti-democratic measures taken by the Israeli prime minister during the coronavirus pandemic” (which, coincidentally or not, bears a remarkable resemblance to the opening paragraph of a report published by Ha’aretz) is inaccurate and misleading.