Previously we have documented some of the reporting by BBC Jerusalem bureau correspondent Tom Bateman on the topic of Israel’s roll-out of vaccinations against Covid-19, including his promotion of a related political campaign initiated by what he has repeatedly described as ‘human rights groups’.

The January 19th edition of BBC Radio Scotland’s ‘Mornings with Kaye Adams’ included an item (from 2:29:41 here) billed as follows: 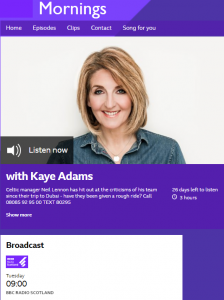 “ISRAEL VACCINATION
What can we learn from the most vaccinated country in the world?”

Participating in that discussion were a virologist from Cambridge University, Dr Chris Smith, and Tom Bateman. Host Kaye Adams introduced the item as follows: [emphasis in italics in the original, emphasis in bold added]

Adams: “…one [country] is standing out – Israel. It has already vaccinated around one quarter of its population and says it is on track to do all over 16s by the end of February. So the rest of the world looks on only in envy but eagerly awaiting valuable information which will come out of Israel’s rapid vaccination programme…”

Adams: “So we’ll kind of stay away from the political implications of this because it’s becoming quite interesting and just focus on the vaccination programme.”

However after only just over a minute of reporting on Israel’s agreement with Pfizer whereby the company will receive epidemiological data in order “to determine whether herd immunity is achieved after reaching a certain percentage of vaccine coverage in Israel”, Bateman nevertheless squeezed his political agenda into the story.

Bateman: “But at the same time, as many things are, it is contested here because Palestinians in the occupied West Bank and in Gaza – 5 million of them – haven’t yet received any vaccines and human rights groups have called on Israel to make those available. Israel says it’s the Palestinians’ responsibility under the Oslo Accords and the Palestinian Authority…ah…is due to be…ah…bringing in – in the next few months, it thinks – either the Russian vaccine or the Oxford AstaZenica vaccine.”

As in his previous reporting on the topic, Bateman afforded the ‘human rights’ halo to a campaign initiated by group of political NGOs without any disclosure of their agendas or the fact that some of them have engaged in anti-Israel lawfare campaigns. Also in common with his earlier reporting is his contortion of the terms of a 25 year-old agreement witnessed by international parties into something which ‘Israel says’.

Bateman’s self-conscription to that political campaign clearly renders him incapable of providing accurate and impartial reporting to BBC audiences on this topic, even when specifically asked to avoid “political implications”.