Listeners to BBC Radio 4’s ‘PM’ programme on May 15th heard a report (from 16:32 here) from the BBC Jerusalem bureau’s Yolande Knell concerning the day’s events in the Gaza Strip. 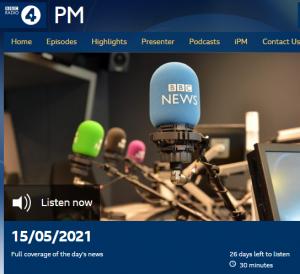 When subsequently asked by the presenter Carolyn Quinn about “clashes between neighbours: Jews and Arabs in Israeli towns and cities” Knell referred to an incident that had taken place the previous night in Yaffo (Jaffa).

Knell: “Even in places like Jaffa […] tension’s been very high there. There was a small child that was hurt from an Arab family when it seems that a Jewish mob tried to set fire to the house.”

In fact Knell had no evidence that it was “a Jewish mob” that threw a petrol bomb at that house at the time of her report. Her claim concerning the identity of the perpetrators was based entirely on supposition.

As reported in the local media, surveillance footage from the incident on May 14th showed two hooded figures (rather than a “mob”) walking in an alleyway near the home before it was attacked but their identity was not clear.

The Israeli police stated that:

“…it is currently unclear whether Muhammad was injured by Jewish attackers targeting Arabs, or by Arab attackers who mistakenly believed the home belonged to a Jewish family. “We are investigating both possibilities,” said police spokesman Micky Rosenfeld.”

Three days later it was reported that the police had arrested one of the two suspects and that he is an Israeli Arab from Yaffo who has a criminal record.

Seeing as this programme will remain available for nearly a month on BBC Sounds, CAMERA UK has made a complaint to the BBC asking for correction to be made both in the recording and on the relevant webpage in order to clarify that Knell’s account of the incident is inaccurate and materially misleading to audiences.