On January 22nd an article by former BBC correspondent Jonathan Marcus appeared in the ‘features’ section of the BBC News website’s ‘Middle East’ page under the headline “Yemen rebel attack on UAE throws challenge to the region”. 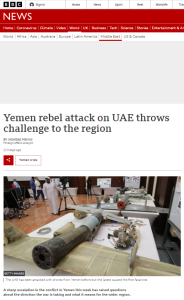 The article relates to the January 17th attack by the Houthis on the UAE in which three people were killed and an attack on a prison in Saada, Yemen, on January 21st. Although it is tagged ‘Yemen crisis’, ‘Yemen’ and ‘United Arab Emirates’, the article includes a section headed “Israel concerns” in which readers are told that:

There have been consistent reports of UAE interest, for example, in Israeli anti-missile defence systems like Iron Dome, though it is far from clear that Israel would be willing to sell such sensitive technology at this stage. But other support could be forthcoming.

Israel may be as interested as the UAE in discovering more about the Houthis’ long-range attack capabilities.”

“While Iran remains a clear ally of the Houthis (and much of the weaponry used in these recent attacks may well be of Iranian origin), the fact remains that this is not a simple client-proxy relationship. The Houthis make their own strategic decisions and it is unclear the extent to which this attack will be viewed positively in Tehran.”

Some clues as to views in Tehran can be found in the activities of other Iranian-backed groups in the region.

The day before Marcus’ article was published Hamas’ Mahmoud Zahar gave an interview to the Lebanese TV station ‘Al Mayadeen’.

“In an interview with the Hezbollah-affiliated Al-Mayadeen TV on Friday, senior Hamas official Mahmoud Zahar denounced Saudi Arabia and the UAE as “Arab Zionists” and accused them of committing “crimes” against the people of Yemen.

“I advise them to return to their religion,” Zahar told the Beirut-based television station. “They are the ultimate losers.”

The Gaza-based Zahar accused the Saudis and Emiratis of aligning themselves with the “Western Crusaders.” The Yemeni people, he stressed, have the right to defend themselves against the “aggression by all means.””

“During Saturday’s demonstration by Islamic Jihad, dozens of protesters chanted “Death to the House of Saud” and “American is the Great Satan,” according to an English translation provided by the Washington-based watchdog MEMRI.
Protesters also waved posters of the leader of Yemen’s Houthi militia.

Although Hamas did not participate in the protest, it tightly controls Gaza and authorizes all public gatherings. The protest threatened to embarrass the terror group, which already is largely isolated in the Arab world, and draw attention to its own ties to Iran. […]

The hashtag, “#Palestinians Support the Houthis,” was trending on social media on Sunday and Dubai’s deputy police chief, Dhahi Khalfan Tamim, announced that Zahar was now on the UAE’s most wanted list.”

Two days after the appearance of Marcus’ article another attack on the UAE took place but it has yet to receive any BBC coverage.

Despite the BBC being one of the few foreign news outlets to have a permanent bureau in the Gaza Strip, its audiences have seen no reporting on that PIJ rally in support of the Houthis or the comments made by occasional BBC interviewee Mahmoud Zahar.