(The following is a slightly revised version of a talk given by our co-editor Adam Levick at the inaugural conference of the London Centre for the Study of Contemporary Antisemitism.) 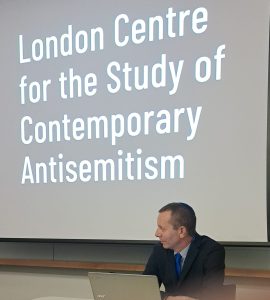 Critical Race Theory (CRT) is an offshoot of Critical Legal Studies, a school of critical theory that developed in the US in the 1970s, which claims that laws are devised to maintain the status quo, thereby codifying its biases against marginalised groups.

In its epistemic relativism, CRT posits that one’s position within society (race, gender, privilege, etc.) determines their understanding of the world, what is true and what is false. Truth, they argue, is “created”, rather than discovered.

In fact, insofar as CRT privileges the “truths” of ‘oppressed minorities’, it promotes a kind of Aristocracy of Victimhood, where minorities are not just granted sympathy, but are gifted extra legitimacy to their ideas and arguments.

Whereas liberal universalism seeks to diminish the significance of identity categories and treat people equally, CRT (and adjacent ideologies, such as intersectionality and ‘Diversity Equity and Inclusion’) obsesses over such categories, attempting to valourise not the dignity of individuals as individuals, but their dignity insofar as their group identity.

CRT also posits that racial disparities in educational and economic outcomes are not only a bug, or even a feature, but the secret objective of liberalism – which manipulates language and history, promotes the “false” idea of racial progress and employs ‘colour-blind notions of equal treatment’ for the purpose of maintaining white dominance over all spheres of society.

CRT’s conspiratorial nature often conjures the idea of all or most whites are making collective decisions to maintain “white supremacy” and keep down people of colour.

The critical theories of race approach argues that racism is not a problem of individual attitudes or behavior, but is a permanent system embedded in attitudes, language and government institutions that everyone is socialised into.

CRT also embraces a mono-causal explanation for inequality, one which erases all other alternative factors for disparities other than systemic racism.

White people – who are framed as a homogeneous group – are the oppressor group with power, while Black people and other people of colour are the oppressed groups – a Manichean paradigm which, writer Niamh Jiménez argues, arbitrarily “divides humanity into a morally pristine class of minority saints versus an ignominious group of ‘oppressor’ fiends“.

CRT posits that racism exists everywhere – in every person, institution, and interaction – and the job of the critical race theorist is to explore HOW (not if) racism occurs in every circumstance. Racism is always assumed.

CRT, due to its refusal to subject its theories to empirical analysis, and its embrace of epistemic relativism, is unfalsifiable.  They insist that you must “do the work”, work that is never completed because there’s no benchmark for success.  Racism as the eternal, omnipresent, malevolent ‘invisible hand’ of injustice.

As American legal scholar Derek Bell, considered one of the progenitors of CRT, said: progress in American race relations is largely a mirage to obscure the fact that whites, consciously or unconsciously, work to ensure white domination.

CRT is also hostile to free speech, arguing that what masquerades as evidence and argument is really just another assertion of raw power by the elite – and that equity requires the public discourse to be tilted against those who are white and privileged.

That means restricting their freedom of speech, using a caste system of victimhood in which those on top must defer to those with a greater claim to restorative justice.

CRT also promotes, in Blacks and other racial minorities who internalize its message, a self-defeating fatalism that denies agency.  They’re oppressed and there’s nothing they can do as individuals to overcome their disadvantages. This represents what Greg Lukinoff and Jonathan Haidt, in their book The Coddling of the American Mind, described as the cognitive distortion of Catastrophising.

In short, CRT is an intrinsically illiberal ideology, one that subordinates facts, reason and careful deliberation to tribal passions.

This, of course, brings up the central question: Are Jews white within this paradigm?

It seems clear that in a movement which posits a theory of justice based narrowly on which groups have power and which groups don’t, Jews – due to their relative success – will inevitably be branded as powerful and deemed complicit in injustice.

In fact, “merit”,according to CRT advocates such as Duncan Kennedy, is only a social construct designed to maintain the power of dominant groups

Indeed, it’s Jewish success – that is, the success of a historically oppressed minority despite all the odds – that seems to place Jews on the ‘wrong’ side in that they disprove the CRT assumption that oppressed individuals can’t succeed due to the permanence of institutional racism.

CRT categorises Jews not as victims or inheritors of generational trauma, but as wealthy, white (or white- adjacent), assimilated capitalists.  Within their ideology, where race and power mediates all human relations and thus adjudicates all claims to victimhood, Jews become part of, or at least complicit with, the white hegemony.

So, how, in reality, does this moral equation impact the conversation about Jews, privilege and power?

As Pamela Paresky, from the Jewish Institute for Liberal Values, wrote about this lesson:

“At a time when the moral imperative is to “be less white,” there is no identity more pernicious than that of a once powerless minority group that, rather than joining the struggle to dismantle whiteness, opted into it.”

The inevitable course of the CRT understanding of the West also includes a likely antisemitic outcome:

Ibram X Kendi’s “How to be an anti-racist” (a dumbed down version of CRT) promotes the ideology’s belief that racial disparities in outcomes are, by definition, evidence of systemic racism – bigotry that, in his rejection of liberalism, must be combated by “anti-racist discrimination” against ‘whites’ (including, it follows, against Jews) – that is, the institutionalisation of preferential practices based on overtly racial and (per such racial essential-ism) antisemitic criteria.

Equality under the law and colour-blind admission standards in education, for Kendi, insofar as such traditional liberal expressions of anti-racism don’t produce equal results, is in fact racist.

While liberalism seeks traditional justice, CRT proponents seek what Thomas Sowell calls “Cosmic Justice”, a Utopian concept that, by demanding not just a fair and transparent process, but the desired result, is irreconcilable with personal freedom based on the rule of law.

CRT turns the Greek saying “character is destiny” on its head, and posits instead that “colour is destiny”.

CRT embraces fatalism and cynicism over liberalism’s agency and optimism.

CRT is obsessed with identity, while liberalism’s project has always sought to transcend identitarianism and the obsession with who we are as the result of mere accidents of birth.

The CRT inspired myth of the white-adjacent, white or even hyper-white Jew helps explain why some anti-Zionists obscenely characterize Israel as a “white supremacist state”, which brings us to a powerful observation by the Israeli writer Yossi Klein Halevi:

Anti-Semites have typically “turned Jews into the symbol of whatever it is a given civilization finds as its most loathsome quality.

Now we live in a civilization where the most loathsome qualities are racism, and, lo and behold, Jews have become “white people” oppressing “people of colour”.

This represents, Halevi concludes, a “classical continuity of thousands of years of symbolising the Jew”.

Moreover, the message of Jewish tradition is that none of us are at the mercy of qualities or characteristics that can never change. Our message has always been one of action and hope—each one of us is a work in progress, even kings and great leaders.

CRT nullifies this powerful and liberal idea—that we are individuals with the power to make a difference in our own lives.

Equality before the law, regardless of class, colour, or creed, is not just the only answer that has worked for Jews, and the greater good, over the long run, it’s also the only solution with any moral authority – the only idea that has proven itself to be most likely to result in human flourishing.

It is not by chance that Jews in particular tend to thrive in societies in which liberalism is enshrined in law and civic culture:

It is the idea that all men are created in the image of God, that freedom is a natural self-evident right which precedes the state, and is shared by all individuals—revolutionary ideas originating in the Torah, but ushered into the West by Locke, Mill, Montesquieu and the drafters of the US Constitution – which offer the only real protection against increasing threats to Jewish freedom and the liberal values that serve as a bulwark against racism and tyranny throughout the world.

Like Loading...
Tags from the story
Antisemitism, Critical Race Theory, General-antisemitism, London Centre for the Study of Contemporary Antisemitism
Written By
Hadar Sela
More from Hadar Sela
Back in 2011 the BBC devoted substantial coverage to what it described...
Read More