This is a guest post by AKUS
For those that missed it, here is CiF Watch’s collection of statistical data for the month of March that demonstrates the extent of the anti-Israel bias and Israel-obsession at “Comment is Free”. (h/t for the idea to our friends at TheBrothersofJudea who track antisemitism at the Huffington Post).
Following a continuing trend, in April, the Guardian launched a barrage of articles at Israel. Almost a third of its 70 articles about the Middle East referenced Israel in one way or another, mostly unfavorably: 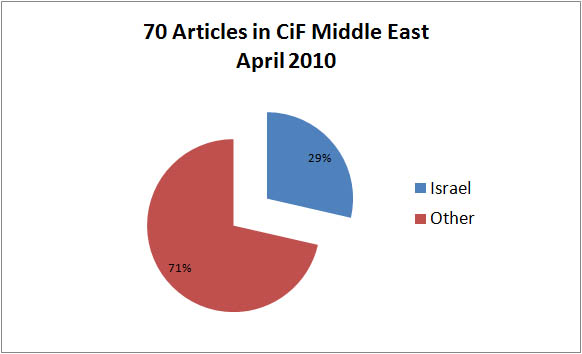 When the numbers are broken down further, it appears that there were exactly 2 articles we could describe as “pro-Israel”, compared with 12 that were “anti-Israel”, and 6 “neutral” articles. 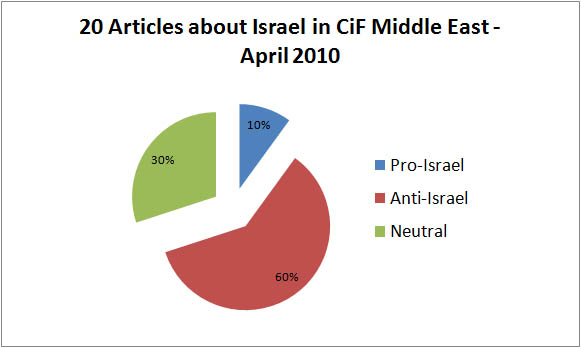 A naïve reader of “Comment is Free” (and that describes many of its habitués) faced with 12 negative articles about Israel from a set of 70 articles about the region as a whole, would be seeing 17% – about 1/6th) of all articles about the Middle East portraying Israel in a negative light, in a region renowned for its dictatorships, Islamic extremism, daily suicide bombings, misogyny, and theocratic intolerance. 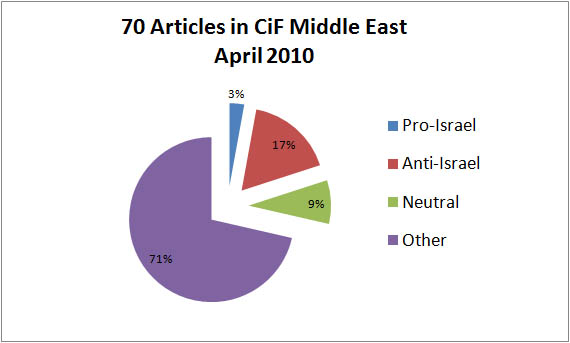 Not exactly the “fair and balanced” view that Georgina Henry pretended she was providing in her response to the Jewish Chronicle.

Like Loading...
Tags from the story
Antisemitism, Comment is Free, Georgina Henry, Guardian, Obsession, Stats, Uncategorized
Written By
Hawkeye
More from Hawkeye
This is a guest post by Joy Wolfe So Ben White knows...
Read More