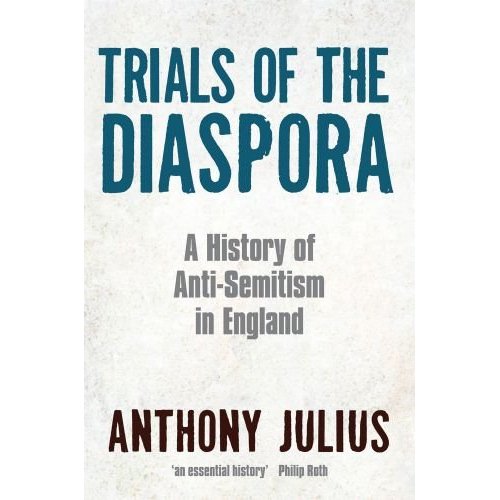 The following is a review of Anthony Julius’s book, Trials of the Diaspora: A History of Anti-Semitism in England, by Jonathan Freedland, writing for The New Republic.  While the book itself should be read by anyone concerned about ant-Semitism in the UK – and the Guardian in particular – this review (as effective literary criticism can often do) represents a great primer on the subject.  While this blog typically shies away from such lengthy essays, our mission – exposing anti-Semitism at the Guardian and their blog, Comment is Free – occasionally necessitates such in-depth and comprehensive analyses of the broader phenomenon of anti-Semitism in British society.  As such, Freedland’s review provides the reader with a good summary of Julius’s study on the British contribution to “the world’s longest hatred”.

Trials of the Diaspora: A History of Anti-Semitism in England

Anthony Julius begins his magisterial and definitive history of a thousand years of anti-Semitism in England with an anecdote from his childhood. He is riding on a train to the English Midlands with his father, who is in conversation with “Arthur,” a non-Jewish business associate. Arthur, keen to ingratiate himself with his companion, remarks that his daughter recently had a little Jewish girl over to their house for tea. “I must say,” Arthur adds, beaming, “the child has got the most beautiful manners.”

Julius recalls that, even at the age of ten or eleven, he had a “sense of the temperature in the compartment rising.” His father says nothing, refusing to confront Arthur over his remark. It is clear that fear plays no part in this decision. Julius père does not lack courage. “It had instead something to do with an unwillingness to condescend to being offended, a refusal to acknowledge the hurt caused by the insult implicit in Arthur’s remarks—that it is always noteworthy when Jews behave well.”

It may seem an odd starting point for a book that is, for the bulk of its eight-hundred-odd pages (including two hundred pages of footnotes), rigorously scholarly rather than personal. But it is fitting. Everything about that early encounter is English: the cramped train compartment, the embarrassment, the stuffiness, what is unsaid signifying more than what is said. And the subject at hand—English anti-Semitism—often operates in the nebulous, subtle, implicit register typified by Arthur’s remark. Indeed, Julius devotes an entire chapter to the “mentality of modern English anti-Semitism,” to the slippery, subcutaneous prejudices and assumptions, the slights and the snubs, that have informed centuries of English social life.

But the memory of that train journey with “Arthur”—a name that centuries ago stood as the very acme of Englishness—lingers over the entire book for a less direct reason. The clue lies in the prose of Anthony Julius, a London-based polymath who made his name twice over—as the literary critic who deconstructed the anti-Semitism of T.S. Eliot, and then, to a much wider public, as the lawyer who represented Princess Diana in her divorce from the heir to the English throne. That prose is cool and precise, never anything but fully in control of the extraordinary breadth of material under review—from medieval church history to the rantings of the early twenty-first-century blogosphere, with Chaucer, Donne, both Eliots, and many other figures along the way. The episode on the train almost has one wondering if this is an author determined to prove that a Jew can write on English history as soberly and thoroughly as any Englishman—with, as it were, the most beautiful manners. But the coolness of Julius’s prose suggests something more, too: a man, like his father, unwilling “to condescend to being offended.”

Accordingly, Julius digs up and holds to the light a litany of murderous crimes committed against the Jews and then, in later centuries, one vicious quotation after another, discussing the evidence he has exhumed in a tone of bemused detachment rather than righteous fury. He serves up, for example, a choice passage from J.B. Priestley, one rich in the hoariest stereotypes, before merely and drily noting that “Priestley’s concessions to everyday anti-Semitic sentiment might surprise contemporary readers.” Perhaps that is the voice that a fine legal training inculcates. But one suspects it is also the voice of a man who learned long ago to be anything but the angry Jew.

The result is a meticulous taxonomy of prejudice, written as if with a pair of surgical gloves, the better to handle a particularly revolting set of specimens. “All versions of anti-Semitism libel Jews. These libels may be grouped under three headings: the blood libel … the conspiracy libel … the economic libel.” A series of distinctions between categories, so fine they might border on the legalistic, follows. The chapter on the mentality of modern anti-Semitism describes four types of English anti-Semitic intellectual: A, B, C, and D. Category B further subdivides into categories B1 and B2.

Not that Julius fails to supply many an arresting, plain-spoken sentence. Several passages of argument culminate in a line memorable and true—indeed, memorable because true. Thus he denies anti-Semitism the status of an ideology, maintaining that it merely allows lumpen-thinkers to barge into intellectual debates that are beyond them: “Anti-Semitism has a place in the history of ideas only in the sense that a burglar has a place in a house.” In a similar vein, Julius offers this on “the new anti-Zionism”: “It inhabits those grooves along which received thought—and non-thought—moves. It is, so to speak, the spontaneous philosophy of … those who do not philosophize, and the spontaneous history of many of those who know no history.” He is particularly scathing about the more extreme Jewish critic of Zionism, upending one of the more clichéd insults often hurled in their direction: “The Jewish anti-Zionist scourge is not a self-hater; he is enfolded in self-admiration. He is in step with the best opinion.”

Read rest of the essay, here.