Even in the U.S., by any standard the most tolerant country towards Jews in the diaspora, it still isn’t uncommon to hear someone being accused of trying to “Jew someone down” – which means, of course, the unseemly effort to get a merchant to lower his price.   I was once in the company of a woman who casually referred to a building in our city which had just burned down as the result of a “Jewish” fire – referring to speculation that the owner set the fire to collect insurance money.

Indeed, bigoted accusations that Jews are cheap, greedy, and materialistic have proven to have – much like the broader phenomenon of anti-Semitism around the world – remarkable staying power.

The myth of Jewish greed dates back at least to the New Testament story of Jesus forcing the Jewish money changers out of the Temple. Teachings concerning Jews as greedy subsequently took hold throughout the Christian world. In the Middle Ages, some Jews became moneylenders — in part because the Church had forbidden Christians from practicing usury (lending money at interest). Usury was condemned as a sin, but since Jews were not subject to Christian law, both the Church and the State appointed Jews as moneylenders and tax collectors.

More recently, many people believe that wealthy Jews get ahead due to cheapness, greed, materialism, unethical business practices, or their “natural skill with money” rather than through a commitment to education and hard work.

One of the more recent Israel contributors to the Guardian is Ana Carbajosa – who writes for the Spanish Daily, El Pais – the most widely read paper in Spain.

As Akus has demonstrated, as well as Eamonn McDonagh, Carbajosa’s anti-Israel views are quite clear.

However, a closer look at Carbajosa reveals a writer operating in a professional and national culture where outright anti-Semitism thrives.

As ADL reported, the mainstream media in Spain engages in vicious and repeated anti-Semitism.

In 2009, Carbajosa’s paper, El Pais, published a blatantly antisemitic cartoon accusing Jews of using their financial power to enable Israel to “violate…all human and international laws.” (El País published yet another anti-Semitic cartoon the same year by Romeu, this time likening Israel to the Nazis by equating Gaza with the Warsaw Ghetto.)

Further, based on polling data compiled on anti-Semitic attitudes in European countries by the ADL in 2009, Spain had the highest percentage of respondents agree with the statement that “Jews have too much power in international financial markets”, with a staggering 74% agreeing.

Further, 56% of Spaniards agreed with the statement that “Jews have too much power in the business world.”

A similar survey conducted the Pew Research Center showed that 58.4% of Spaniards think that the “Jews have much power because they control the economy and the media”. Among university students this attitude reaches 62.2%!

This is the broader context  in which a piece in the Guardian on Dec. 26, by Carbajosa, “The Holy Land is on a tourism high“, should be viewed.  Carbajosa spins a story about increased tourism in the Holy Land by weaving in a caricature of domineering Israelis, and which includes unmistakable anti-Semitic undertones regarding alleged Jewish greed.

In fact, the piece originally contained the title:

The Holy Land is on a tourism high: Visitors are flocking back to Jesus’s birthplace but border controls mean Israelis call the shots and cream off revenues

The word choice in the full title is really quite telling.  First, we’re told that there’s something just not quite right about Israelis (that is, of course, Jews) exercising control over the site of Jesus’s birth.

Of greater interest, however, is the term “cream skimming” – a pejorative which typically refers to reaping inappropriate or unethical profit from a business transaction.

Upon researching the term, I came across its use in a 2004 article in, yes, The Guardian, titled, “The Great Nazi Cash Swindle,” about the Nazi plan, during the the Second World War, to destabilize Britain by showering it with billions in forged bank notes.

Here’s the passage from the 2004 piece, written by Nancy Banks-Smith, which is notable in its use of the term “creaming off”, as well as the quite insidious insinuation that Jews profited from the Holocaust:

Why throw away what you can spend? He [Nazi office Bernhard Kruger] laundered the forgeries through a network of agents, many, ironically, Jews, creaming off a third as profit. [emphasis added]

Quite interestingly, the subtitle of Carbajosa’s piece was later changed (the offending passage, “cream off revenues,”  was deleted) without comment: 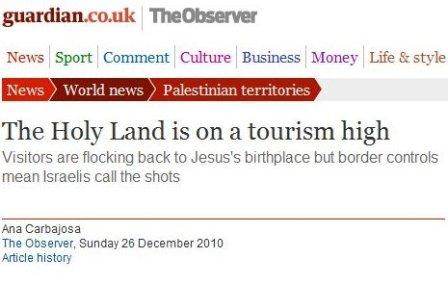 Leaving the title aside, among the more notable passages in Carbajosa’s article – and one emblematic of the broader narrative being advanced – was this:

Life in Bethlehem has long revolved around Manger Square. Coffee houses, falafel stands, traditional sweetshops and the local market are all working at full speed. The souvenir shops have a less certain income. While the owners of the stores that receive the tourist buses from Israel become millionaires, those that are not on the same circuit struggle to survive. “The guides don’t give freedom to the tourists to walk around because they think we Palestinians are dangerous people,” says Angela Giacaman, who sells figures her brother carves from olive wood. “They go from the bus to the church and from there to a prearranged shop where the agents get a 40% commission. They treat the tourists like flocks of sheep. [emphasis added]

The narrative of the story is unmistakable: Israelis, with a fixation on money, crudely exercising military control over a site holy to Christians, exploiting both tourists and Palestinian merchants – crafty and cunning Jews who, after all of these years, still engage in unseemly business practices akin to Usury.

In short, a Christmas tale fit for the Guardian.

0 replies on “A Guardian Christmas tale of Christian Pilgrims, Bethlehem, the Church of the Nativity (and exploitative Jews)”