A major diplomatic row exploded last night as British Foreign Secretary William Hague refused to disembark from his plane at Ben Gurion Airport in Tel Aviv after Israeli peace activists threatened to arrest him for war crimes, The Observer reported. 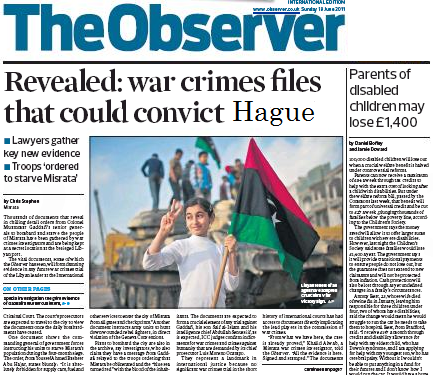 The Israeli government has promised to review its legislation after admitting that the activists may well have succeeded in bringing a prosecution against Mr Hague under Israel’s strict laws governing the rules of military engagement, not always observed by NATO and other military forces.

“It is the duty of all conscientious citizens to bring the warmongers of this world to account. The UK has actively engaged in four wars of aggression in the last 10 years alone and is, as we speak, slaughtering innocent civilians in Afghanistan whilst aiding and abetting the ethnic cleansing of black immigrants and Saharan tribes people in Libya. What’s more he refuses to investigate the numerous well-documented abuses of the UK military criminals in Iraq ranging from cold-blooded shooting of civilians to the torture and murder of detainees”.

“The UN Human Rights Council needs to step in”, added Margie in Tel Aviv. “In the meantime we won’t rest until we see Mr Hague on trial for war crimes. In The Hague.”